Hi folks. I’ve been writing this regular column for a few years now, a pursuit that I’ve very much enjoyed. However, recently I received a complaint from a subscriber about an aspect of my writing that I feel I should publicly address—because I believe this person has a fair point. And I’m big enough to admit it.

As someone who likes to make a joke, I often go for the cheap laughs, and it’s high time I matured as a writer. You see, in these columns I’ve often relied on using cliched stereotypes of musicians for comedic effect. You know what I mean: the sort of jokes that stereotype musicians’ personalities according to the instrument they play. This newspaper holds a high journalistic standard of writing, and I think it’s about time I rose to that standard.

It goes without saying that musicians (and even drummers) are complex and nuanced human beings, and it’s small minded and prejudiced for me to lump them all into some cliched personality type purely based on their chosen instrument just because I assume that you might think it’s funny. Enough is enough. Times have changed, and making fun of broad stereotypes is just simply outdated.

No more will I be comically characterizing them as musicians constantly complaining about not having enough work. That joke’s not clever, and it’s getting old. In truth, many trombone players have plenty of work! Not only in music, but in a variety of professional fields, like…pizza delivering. 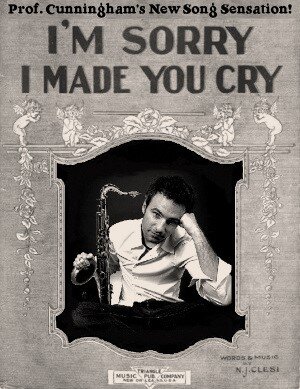 I think we can all agree that stereotypes are often offensive, and that this type of comedy is just not funny anymore. In this enlightened age of cultural awareness and sensitivity, it’s about time I grew beyond the cheap gags that I’ve been relying on. And as a professional musician myself, I could certainly be more sensitive with these issues.

If you’re hanging with a jazz musician right now, don’t ask them to read this out loud to you. They’re terrible readers and will make lots of mistakes, but they’ll tell you they meant to make them and give some excuse like “in jazz, there are no mistakes.” It gets really annoying.

I know that you, the educated Syncopated Times reader, expect a high quality for your subscription dollar, and from now on, that’s what I’m going to give you. My writing has been the lazy way out, and I know you deserve better.

Guitarists, since you never learnt to read: find a piano player and get them to read this to you.

And, when you think about it, these two dimensional caricatures only serve to perpetuate the oppression of the music profession in greater society, reducing our industry to nothing more than a punchline. We as a profession, deserve a more respectful approach. And what better platform than this column, and yours truly, to spearhead the change.

Vocalists wouldn’t have read this far into the article. After they realized it wasn’t about them, they’ll be too busy looking through this paper for pictures of themselves.

I don’t want to just pick the low hanging journalistic fruit anymore, folks. And besides, these jokes are getting pretty old and tired, don’t you agree? It’s lowbrow comedy, and it’s about time I lifted my game. There are so many better things to write about in our industry. Musicians are a very sophisticated and nuanced demographic, deserving of a less supercilious and condescending tone from this literary provocateur.

Drummers—sorry about that last sentence. I’ll try and keep my word usage under three syllables.

So, in closing, a final apology. No more cliched writing from me. No siree! Our readership deserves better, and from now on, this humble jazz clarinetist is going to deliver! Now if you’ll excuse me, I need to change a light bulb. I know it’s a simple task, but it will probably take me all day. I just need to find the perfect light bulb…

(Nota Bene: This original draft of this article was actually funnier, but I had to give my agent 15% of my jokes. Again, my sincerest apologies.)