Anatomy of a Song: Paul Whiteman’s ‘When’

On March 12, 1928, Paul Whiteman and the musicians in his orchestra went to the Victor recording studios in Liederkranz Hall, 58th Street between Lexington and Fourth Avenue, New York, NY and recorded three numbers: “When,” “Down in Old Havana Town,” and “I’m Wingin’ Home.”

In the present article I provide information about “When,” the first number recorded in that session.

It will be seen that Andy Razaf and Bob Schafer wrote the lyrics and J. C. Johnson composed the music. When is an example of an interracial composition: two of the songwriters, Razaf and Johnson, were African American and the third, Schafer, sometimes spelled Shafer, was white.

Andy Razaf, African American poet and lyricist, was born Andriamanantena Paul Razafinkarefo on December 16, 1895, in Washington DC, and died on February 3, 1973, in North Hollywood, CA. Razaf was the son of a Madagascar nobleman and nephew of Queen Ranavalona, III of the Imerina kingdom in Madagascar. The Songwriters Hall of Fame, where Razaf was inducted in 1972, lists over 200 songs co-written by Razaf-among them “Ain’t Misbehavin,” “Black and Blue,” “Honeysuckle Rose,” “In the Mood,” “Louisiana,” and “Stompin’ at the Savoy.” Razaf co-wrote the Broadway scores for Keep Shufflin’, Hot Chocolates, and Blackbirds of 1930.

Pianist and songwriter Jay C. Johnson was born on September 14, 1896, in Chicago, IL. He collaborated with Fats Waller and Andy Razaf in writing songs. He was accompanist for Ethel Waters and several other blues singers. J. C. Johnson’s most famous composition was “The Joint is Jumpin’” later heard in the Broadway show Ain’t Misbenavin’. Johnson died on February 27, 1981, in St. Luke’s Hospital in Manhattan.

Lyricist, singer and music publisher Bob Schafer was born on July 24, 1897, in New York, NY. Beginning in 1920, he collaborated with composers (often African American) of the caliber of Duke Ellington, Fred Fisher, Johnny Burke, Spencer Williams, and Sam Wooding. He was manager of the Chicago office of Sherman Clay Music Publishers. Schaffer died in New York NY on September 28, 1943.

According to the Discography of Historical of American Recordings, the vocalists were Bing Crosby, Al Rinker, Austin “Skin” Young, Charles Gaylord, Jack Fulton. The inclusion of Crosby is incorrect. The fifth vocalist was Harry Barris.

Whiteman’s Recording of “When,” Discographical Data. From Rust [1], Rayno [2] and Sudhalter and Evans [3]: 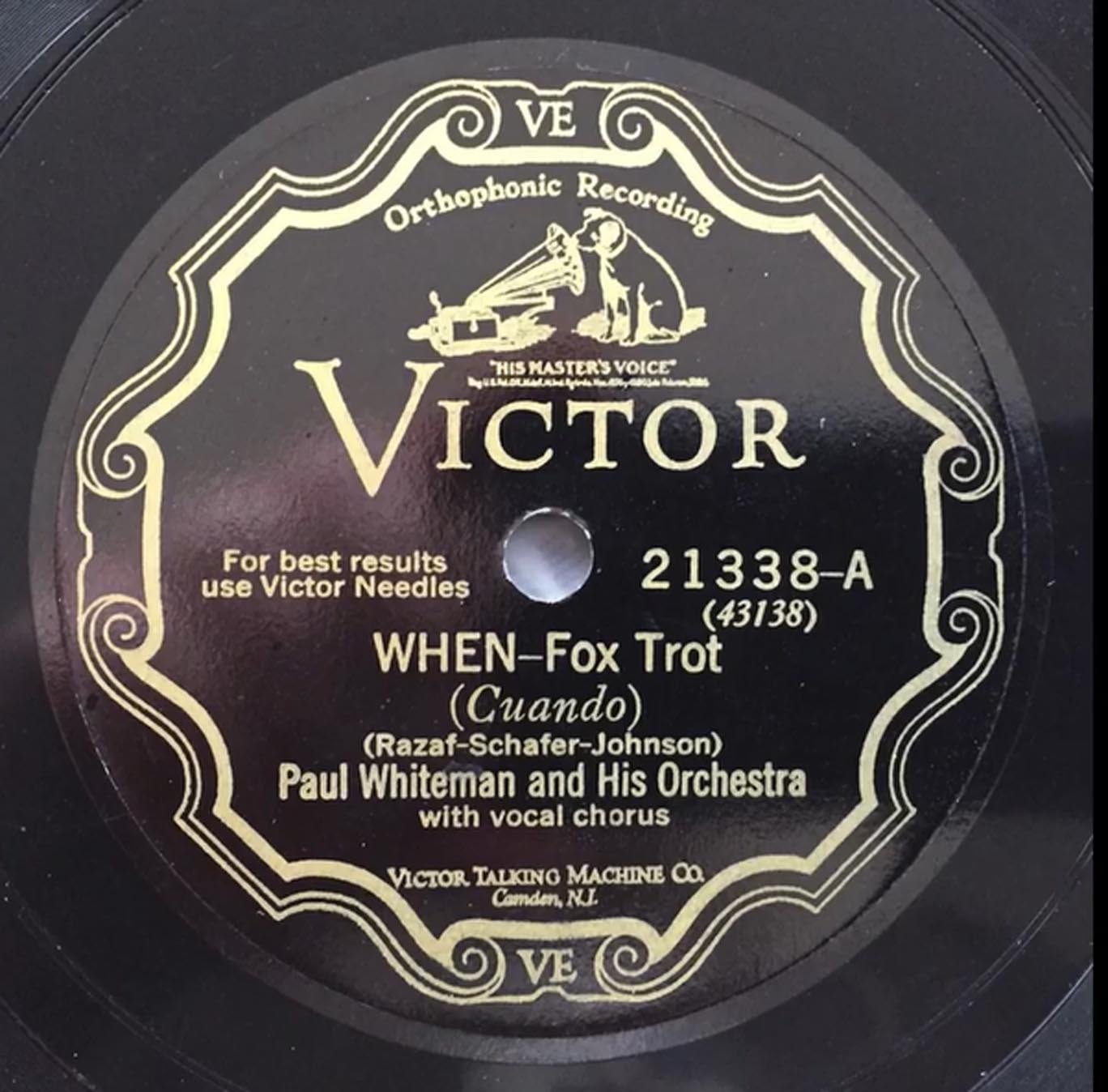 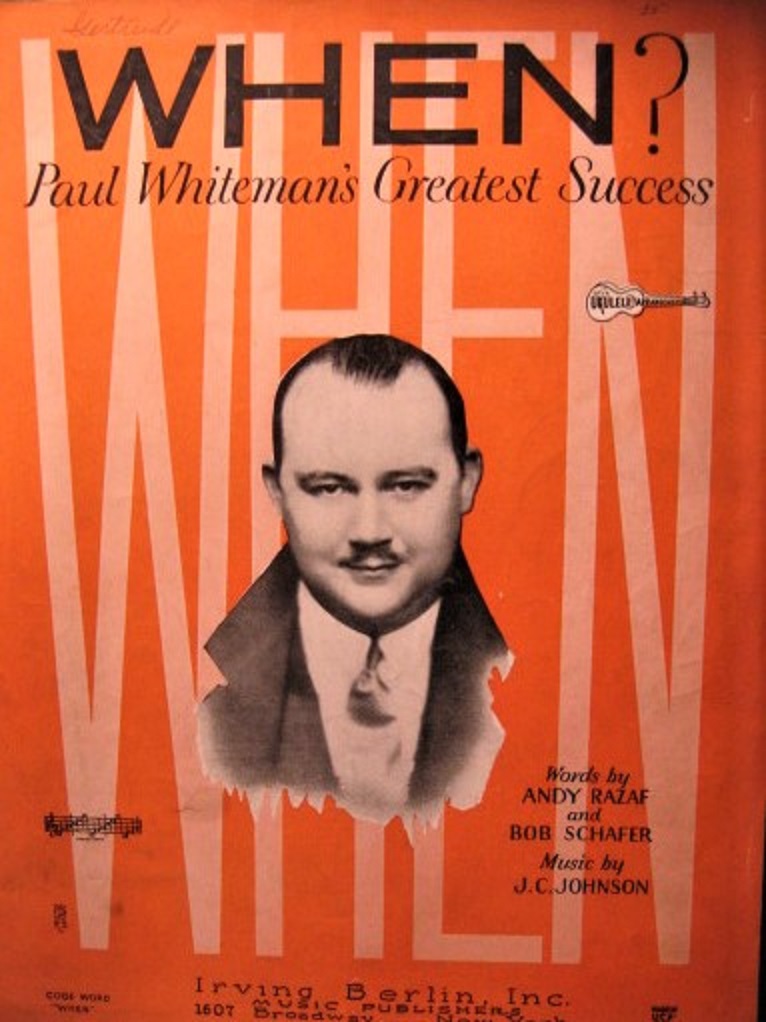 nterestingly, Victor 21338 specifies “with vocal chorus.” Victor 25367 does not, but includes the name of the arranger and of three of the soloists featured in the recording: Bix, Trumbauer, and Friedman. Furthermore, note that the sheet music cover includes a question mark after the word “When,” but the copyright and the record labels do not.

The legendary French Composer Maurice Ravel attended the March 12, 1928, recording session at Liederkranz Hall. Pianist Roy Bargy recalled some of the circumstances. [3] “We played Ferde Grofé’s Metropolis and the Suite Of Serenades by Victor Herbert for him. He was politely interested but not overly enthusiastic about either composition but seemed to appreciate the musicianship of the players.”

A Selection of Later Recordings of “When”

Whiteman’s orchestra was the first to record “When.” A little over three months later, on June 21, 1928, in Indianapolis, IN, Charlie Davis (composer of “Copenhagen”) and His Orchestra recorded “When.” The recording was issued on Vocalion 157001 and included Dick Powell on banjo.

It did not take long for the song to cross the Atlantic.

In July-August 1928, Billy Bartholomew and His Delphians recorded “When” in Berlin, Germany with Al Bowlly on vocal. The recording was issued on Grammophon 21654.

Jack Teagarden and His Sextet played “When” at their live “Roundtable Club” appearance in New York, NY, on July 1, 1959.

Several Jazz Repertory orchestras recorded “When.” Among them:

Dr. Albert Haim is Professor Emeritus of Chemistry at SUNY Stonybrook and a renowned authority on the recordings of Bix Beiderbecke.

Dr. Albert Haim is Professor Emeritus of Chemistry at SUNY Stonybrook and a renowned authority on the recordings of Bix Beiderbecke