As I write this, I’m sitting at a cafe at St. Kilda, Melbourne (Australia, that is).

Because of, ahem, certain recent pandemia, it’s been almost impossible for me to return home to see my family and friends. And of course, after nearly three years, it’s lovely to be home. But now that I’m here, it’s reminded me of a) how bloody far away it is, and b) how different our language and culture can be. You may be familiar with some of our lingo, for example the classic: put another shrimp on the barbie. Barbie is our way of saying barbecue, however you’ll be disappointed to know we don’t actually use the word shrimp here; we say prawn. (This word was “translated” for a tourism ad-campaign to entice Americans to visit. Did it work?)

And of course, there are many more local colloquialisms that never made it off these shores, some even related to jazz. So allow me, your self-appointed cultural ambassador, to explain some important Australianisms, so on your next trip down under you can wow the musos with some local lingo.

For example, in jazz here we don’t say someone is swinging. We say they are hopping, eg: that solo was really hopping! This is a result of the cultural influence of our native marsupial, the kangaroo!

Here’s another term that will seem strange to you. We, of course, have trumpets here. Except we don’t call them trumpets. In honor of the native aboriginal instrument, we call them metal didgeridoos.

Here’s another aspect of Australian culture worth explaining: we love to do something called “take the piss.” (Please excuse the vulgarity of this term. We’re not exactly refined over here.) We love to “take the piss” out of people, especially people from overseas. To “take the piss” can be roughly translated as to “pull one’s leg.”

Because of our distance from the rest of the world, our country is often a mystery. And as such, we take great joy in making stuff up to see what we can actually get to people to believe. 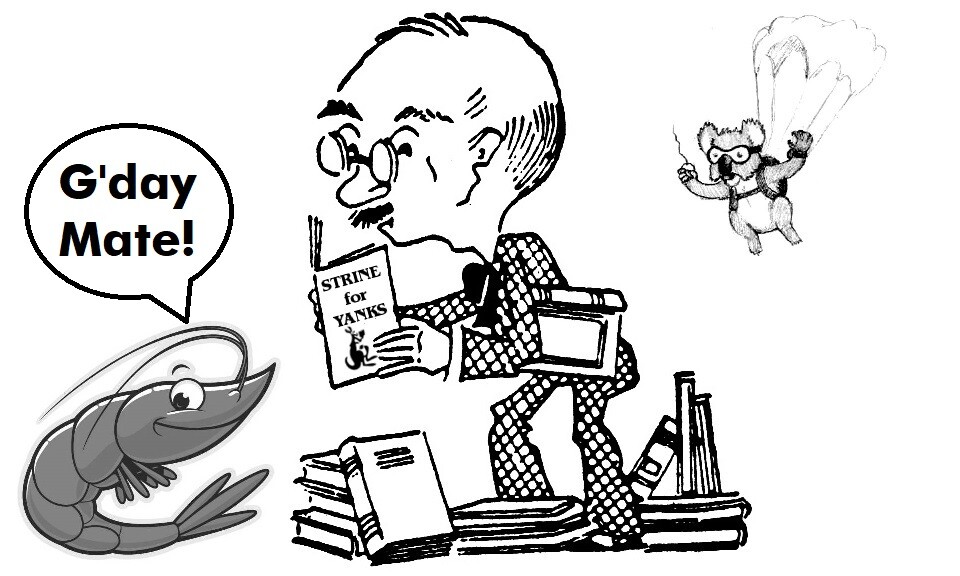 You may have worked out by now that those “Australian jazz terms” you just read were not remotely true. Yes, dear reader, I was taking the piss. But don’t be offended, be honored that you entered into a sacred part of our culture.

And here’s some other classic yarns (stories) we love to tell whomever will believe it:

Drop bears. I’m sure you’re aware of our cuddly koalas. Believe it or not, sometimes these docile creatures can turn feral. If you’re bushwalking (hiking) they can drop from trees above and attack with razor-sharp claws and fangs (hence the name drop bear). However, they are afraid of bright colored objects, so wearing an ice-cream container on your head is a good defense. You might look like an idiot, but it’s better to be safe than sorry.

So, if you happen to see someone buskwalking with an ice-cream container on their head, you know a local has hooked them in on this classic tale.

Here’s another one of my favorites. There’s a country town, about five hours from Sydney called Wagga Wagga (yes, this is a real name. I’m not making this up). It’s important to note that this town is way inland, with no beach, nor sign of water for miles in any direction. And at the edge of town, there’s a huge open air drainpipe about 20 feet wide.

So if you visit Wagga Wagga, make sure you get there in time for the: 5 o’clock wave.

At 5 pm every day, the rain water catchment gets released, launching an almost perfect wave down through the pipe. This is a perfect wave for swimming, or surfing! We recommend you take a boogie board and wetsuit to be fully prepared for this amazing wave!

So, if you happen to see anyone wandering around Wagga Wagga in their swimmers and surfboards, you can be sure they fell for the 5 o’clock wave yarn.

So, I hope this has been somewhat enlightening for you. Sure, all this tomfoolery probably sounds a bit harsh to you. But nobody ever said we were civilized. After all, what do you expect from a country where us kids grow up wrestling crocodiles as a pastime? Yep, believe it or not, I grew up wrestling crocodiles. Would I lie to you?