(LOS ANGELES, CA) For over 15 years every Tuesday morning, a crowd has gathered in L.A.’s San Fernando Valley to listen and dance to a top notch 19-piece Big Band. As the pandemic has eased, the public rehearsals of The Big Band Alumni that became legendary under the direction of the late Johnny Vana have resumed—at a new location.

The Canoga Park Elks Lodge has replaced Las Hadas, the restaurant that hosted the band in Northridge for many years, as it became a permanent casualty of COVID. Also, the starting time for the band is now 11:30 every Tuesday morning—an adjustment made from 10:30 prior to the shutdown, to better accommodate lunch goers.

And with the passing of long-time leader Vana, male vocalist Bill A. Jones has stepped up to “front” the band, and emcee. Female vocalist Bonnie Bowden is taking a hiatus from the band, during which Nancy Osborne—who sang with The Alumni previously—has returned. Actual leadership of the band is guided by a panel of four musicians selected by the ensemble shortly after Vana’s passing, including long-time bassist Gordon Bash, who acts as music director. 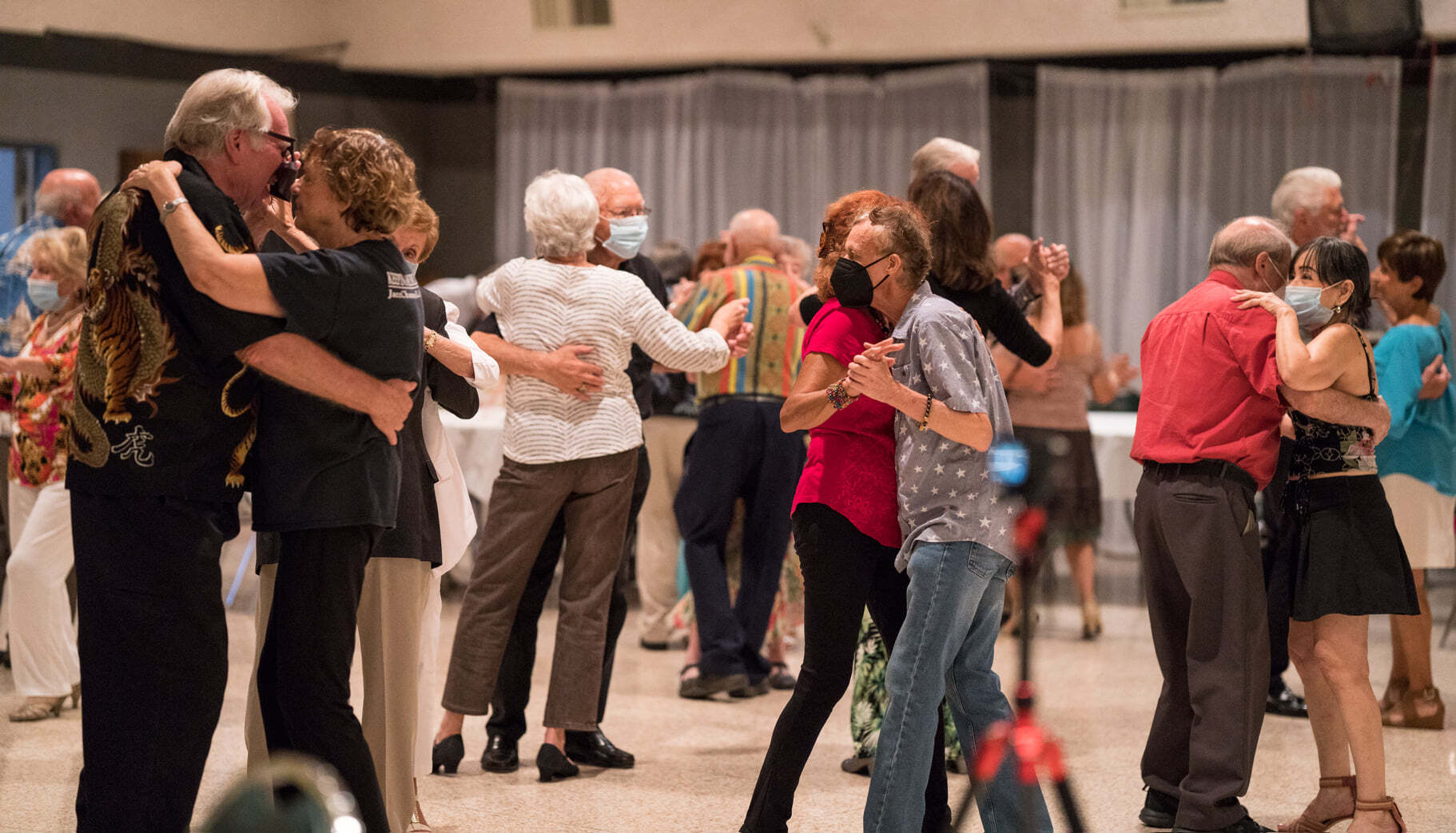 The Alumni is sometimes compared with New Orleans’ Preservation Hall Jazz Band, but instead of Dixieland music, the focus is on Mid-Century Big Band Swing and Jazz, and Classic Vocal Pop Standards as made famous by Sinatra, Ella Fitzgerald, and others—always with danceable tempos.

The band was established in Los Angeles 22 years ago by members of the original Big Bands, such as Glenn Miller, Benny Goodman, Tommy Dorsey, Harry James, Woody Herman, and Count Basie. Most of the instrumentalists in the band have not just spent time in those “name” bands, but have worked with such artists as Frank Sinatra, Ray Charles, Rod Stewart, Elvis Presley, and Lady Gaga—to name just a few. In years past, the band has played at the Academy Award Governor’s Ball, The Reagan Library, and opened for Tony Bennett at the Beverly Hilton.

Attendees give the new venue high marks, as the dance floor is much larger, and the Elks Lodge offers well-priced lunch fare, as well as a full bar. Attendees get a five-dollar Voucher good toward food and beverage, as well as admission from the $15 collected at the door. 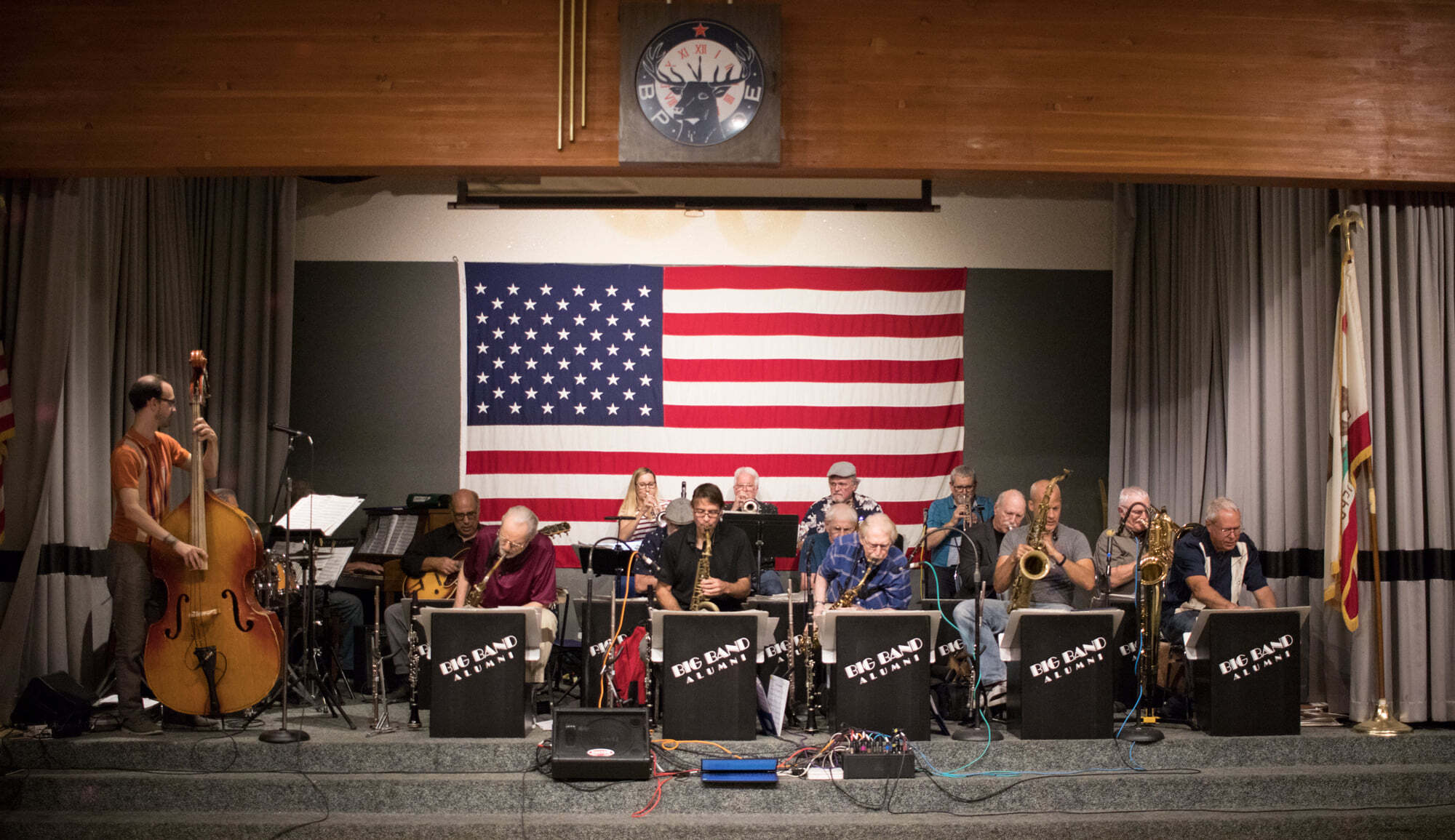 Canoga Park Elks Lodge 2190, at 20925 Osborne Street in Canoga Park California, has also hosted the monthly gatherings of The Valley Jazz Club for many years, and may already be familiar to music lovers. Valley Jazz Club has remained on hiatus, but has hopes of returning at some time in the future.

COVID safety has been of utmost importance, and in accordance with Los Angeles mandates, patrons are required to show proof of vaccination and wear a mask when not actively eating and/or drinking. All members of the band are fully vaccinated.

Newspaper and Magazine articles, a documentary, and a Marconi Award-winning news segment from CBS’s Sylvia Lopez have all profiled the Band over the years. Some of that material can be found at the band’s website BigBandAlumni.com.

In addition to the Tuesday morning rehearsals, the band has already performed at 3 outdoor events since starting back up. And a promoter in Kenya has even expressed interest in having the band travel to Africa for a “Big Band in the Bush” engagement. Booking information for The Big Band Alumni can be found at BigBandAlumni.com.