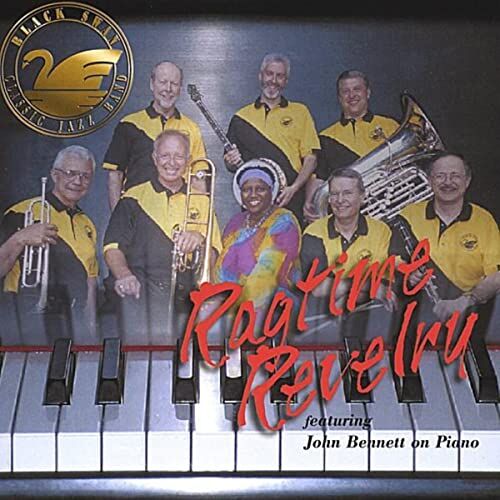 When “ragtime” is mentioned, many people—perhaps most—think immediately of piano players. In the early 1900s, ragtime was the domain of piano players. Ragtime was “revived,” one might say, in 1974 when the movie The Sting was released with its compelling background music: the ragtime piece “The Entertainer.” Thereafter—and even today—whenever “The Entertainer” was and is played, most often it is identified as “The Sting.” Today there are many players like Butch Thompson and Terry Waldo who include ragtime in their repertoires, as well as some who devote themselves entirely to ragtime.

The music was first promulgated by piano players—mainly men such as Scott Joplin and Tony Jackson, but also women such as May Aufderheide—who both composed and played it. However, it was not limited to solo pianists; musical groups, such as James Reese Europe’s 369th Regiment army band and other musical aggregations like W. C. Handy’s included it in their repertoire. These arrangements have often been given a second life by being adopted by modern day ragtime ensembles, such as the Peacherine Ragtime Society Orchestra, the New Orleans Ragtime Orchestra, or the Paragon Ragtime Orchestra.

Ragtime has also been picked up by traditional jazz bands, many of them including one or two ragtime numbers in their repertoires. Few, however, present a whole ragtime set or an entire recording of ragtime pieces. Two ragtime albums have long been among my favorites: Elite Syncopations, by the Chris Barber band, and The Many Faces of Ragtime, by the Turk Murphy band. Joining those who have issued a ragtime album is the Black Swan Classic Jazz Band with this album, Ragtime Revelry.

Most of the tracks should have some degree of familiarity for the listener, whether it be the tune title or the composer’s name. The first track, “Weatherbird Rag,” will most likely bring to mind the famous composer, a certain Louis Armstrong, and possibly his 1928 duet on the piece with Earl Hines. However, the tune was first recorded by King Oliver’s Creole Jazz Band in 1923 with Armstrong playing second cornet. On this CD the tune is arranged by leader of the band Kit Johnson, as are several others.

Ragtime does not provide much opportunity for improvising, and the scoring is all-important, as this one bears evidence. In this arrangement Johnson’s handling of the intricacies that go into a ragtime composition is sure. Here and throughout Ernie Carbajal eschews vibrato, giving the horn a flat and somewhat plaintive quality, which seems very appropriate. Ragtime, to me, speaks of a time long gone, whether it be played at medium tempo (as here), up tempo (“Dill Pickles”), or slow tempo (“Solace” or “Bethena,” both waltzes, the latter being a superb creation).

Another surprise might be the several vocals. Not many of the ragtime numbers played by solo piano, orchestra, or jazz band include any lyrics. On this disc a number do—four by Marilyn Keller and a couple by Alan Phillips. Some of these, such as “Dill Pickles” by Keller and “Barnyard Rag” by Phillips, require fast tonguing. Each vocalist is up the task, not tripping or becoming tongue-twisted, and the vocals add another dimension to the ragtime experience.

The album also features pianist John Bennett accompanied by minimal rhythm—tuba and drums on “Maple Leaf Rag,” washboard on “Black and White Rag,” drums on “La Comparsa” and “The Mule Walk.” Bennett also shows his considerable arranging prowess. All but one of the numbers not arranged by Johnson are Bennett’s.

This CD will appeal to all those who love ragtime and/or traditional jazz. Although it was recorded some years ago, it is still available. At https://blackswanclassicjazzband.hearnow.com/ragtime-revelry one can find ordering details.