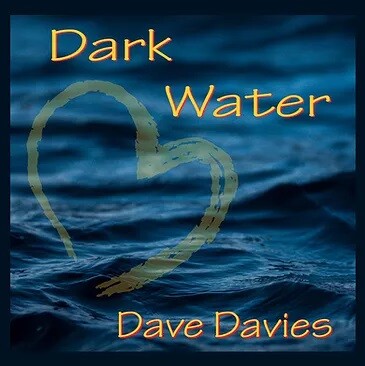 Dave Davies shines as one of Ithaca’s most talented and most versatile musicians. In recent years, he’s best known for his work with the Gypsy swing octet, Djug Django. In that combo, Davies plays guitar, trombone, sings lead and harmony, and composes original material to complement the band’s vintage repertoire.

His musical skills seem to have no boundary. He also plays trumpet, tuba, and upright bass. And as a founding member of the Gourmet Jug Band, he adds percussion as an ace washboard player.

Many of those various talents come to the fore on his new CD, Dark Water, an eight-track album recorded and mixed over the last four years by Will Russell at Electric Wilburland studio in Ithaca.

Over his 30-plus-year career Davies has four previous discs, most featuring jazz standards and swing-dance numbers. His first album, 3 by 5, showcased two projects—the Dave Davies Trio and the Hotfoot Five—in the early 1990s. The Hotfoot Club released Don’t Ever Say Goodbye in 1999 and a “Best of” disc in 2008.

Ten years ago, Davies issued Downstream Where the River Meets the Sea an ambitious, mostly original album, under his own name.

Now Dark Water might well be considered a kind of “concept” album, in which Davies the songwriter reflects on the pervading sense of dread that overshadows 21st century America.

“Big Brother” gives way to Davies’ 2020 adventurous “Orange Circus,” a satirical composition about the troubled Trump presidency. The late drummer, Al Hartland, keeps a solid, finger-snapping rhythm percolating beneath the lyrics before an inventive set of musical surprises paint a picture of a Fellini-esque psycho-circus, complete with trapeze artists and dancing bears.

After a bridge in three-quarter time channels a calliope, keyboardist Lieberman improvises effortlessly. He pounds out ascending chords juxtaposed with slightly dissonant figures, as Davies sings, “There might be blood at the Orange Circus…”

Leaving the surreal D.C. scene, Davies delivers an upbeat anthem, “My Musical Town.” You might assume he’s singing about Ithaca, but the song’s characters are clearly from New Orleans:

“Longview Blues” suffers unfortunate fret-squeak throughout, but otherwise rolls along through the mist, as Davies is backed by just two able bandmates, pianist Chad Lieberman and bassist Harry Aceto. The laconic lyrics promise to “keep on the best I can” before a minor key bridge resurrects the tune, punctuated by quick piano fills and perky guitar lines. Though his guitar might screech a bit, Davies salvages the song with his wonderful, easy-going yet soaring vocal.

Davies’ sublime singing does the trick again with the yearning “Stay with Me,” a mid-tempo plea meticulously harmonized and arranged.

Inspired by Joe Zawinal’s “Mercy, Mercy, Mercy,” this tune gives the Party of Four—Coogan, Davies, Gottlieb, and Robinson—a chance to bask in the spotlight. They nail the chorus and add depth and dynamics with clever duets in the middle of the song. Lieberman’s organ break leads inevitably to a jubilant climax!

Davies plays all the instruments—guitar, vocal, trombone, and bass—on the title tune, “Dark Water.” After a fingerpicking intro, his buoyant vocal promises that, no matter the rising tides, “I’ll be by your side.” His ’bone-blowing takes centerstage here, first supporting the vocal then taking off on a break raggin’ the waves!

“Howl of the Underdog” returns to stark reality. This discerning diatribe against big business, big money, big brother, and big dogs is sparked by stop times and a catchy hook. It’s relentlessly uptempo as a train roars and Eric Aceto’s five-string fiddle flies behind the vocals. “Aah-ooo!” indeed!

“Welcome to the World” concludes the set, as the songwriter warns that it’s “time to get cozy with uncertainty.” Nevertheless, the tune bounces along mid-tempo as Davies’ always-potent lead vocal is ably backed by those supporting singers, while Lieberman comps capably behind them on piano. “Even though my heart is breaking,” the song—and the album—end abruptly and surprisingly. It’s hallowed vaudeville wisdom: always leave ’em wanting more!