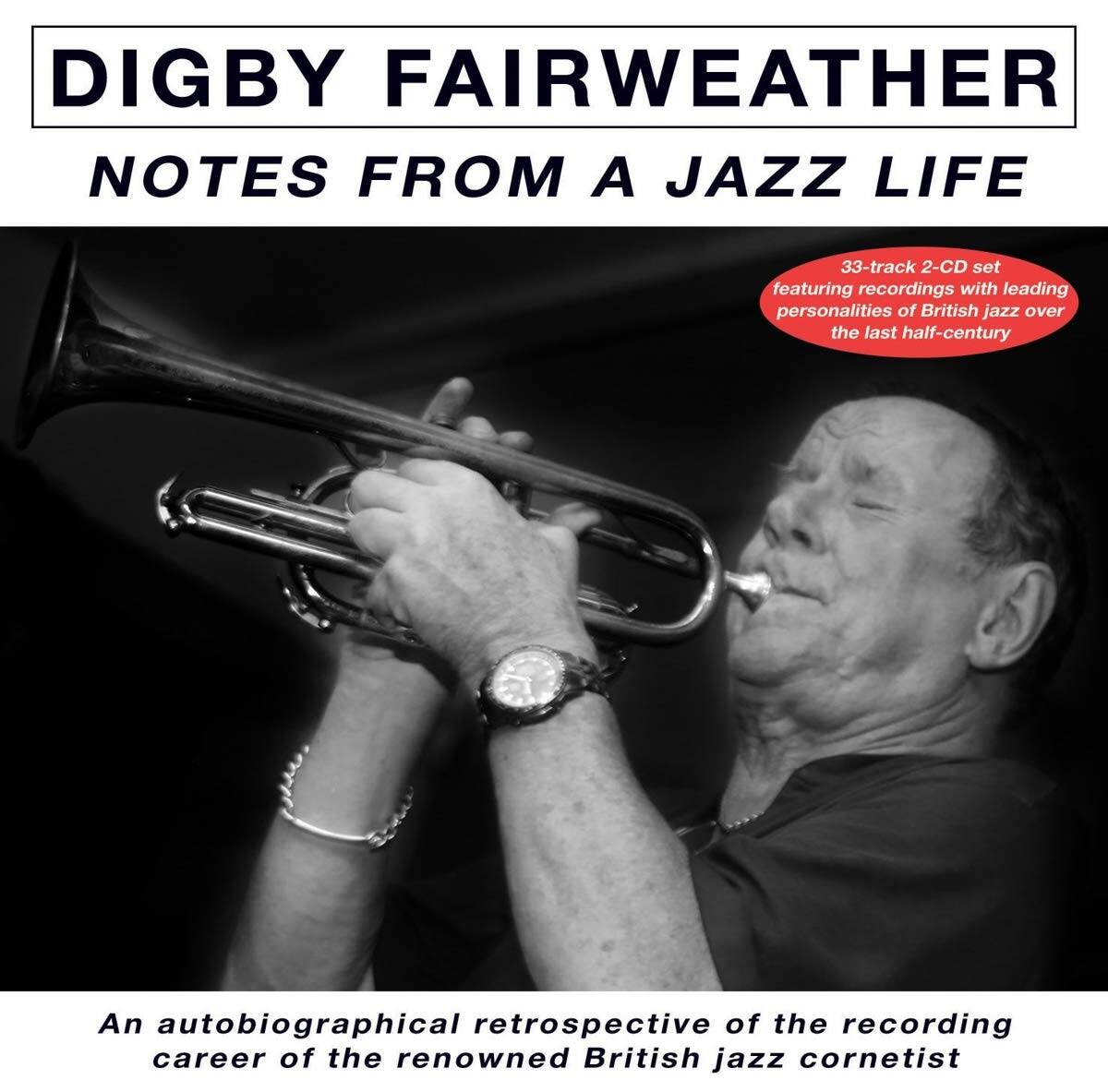 A few months back Dan Barrett had an essay subtitled “What’s in a Name?” which listed off all the amazing jazzmen blessed with monikers that are almost too good to be true. I would add cornetist Digby Fairweather to that list. What a handle for a British Jazz musician! But of course British jazz was full of too-good-to-be-true names like Monty Sunshine and Kenny Ball. Though a member of the generation that followed the trad boom, Digby has earned his place among those great names with a career now entering its 50th year—almost 45 at what he considers the professional level.

This is an example of a special kind of collection I’ve learned to enjoy. Many jazz musicians have a reels of tape collected over decades and a few of them have created “greatest hits” albums mixing live cuts and a choice tracks from their hard-to-find back catalog. Unless they have become known for a theme song, a jazz musician’s greatest hits aren’t usually the crowd favorites, they are the performances they are proudest of, whether because of their own contribution or the success of the greater whole. These albums provide not just a retrospective look into the musical mind of the artist but are also nearly guaranteed to feature great music throughout. They also trace an arc through decades of history that the usually short careers of pop stars couldn’t hope to follow.

The music on Notes from a Jazz Life is a diverse assortment of classic jazz rooted in the tradition but also crowd pleasing for its moment. Jazz fans in the 1970s were a more numerous and diverse bunch than they are today. One of his first groups was formed with the “purpose—possibly more questionably for jazz purists—to play Dixieland and Swing but also turn on the jazz-fusion if and when we felt like it.” None of the later stuff makes it onto this collection, but having insights like that into every band featured is very helpful. He has been part of too many groups to even begin listing. Fortunately, Digby describes what made each one musically distinct in the exhaustive yet personable liner notes stretching to 28 pages and bursting out of the jewel case.

The notes themselves are, at least for someone like me, worth the price of the album. This isn’t a “so and so got drunk and then…” type of narrative. The regular lineups and personnel changes of a number of bands are recorded for posterity and a glimpse is given at both how British jazz musicians saw themselves in the decades after the boom and how they saw the changing audience for jazz.

Musically, very little of this is what you’d call British Trad; the play is a bit more timeless and modern. The jazz scene was huge in the UK in the ’70s and beyond, with dozens of clubs around London. There was nostalgic play, and then there was the naturally evolving and living tradition of classic jazz. Most of these recordings fall into the later. There are some wonderful jams here. For me the 1978 cut of “Struttin’ with some Barbecue” featuring Fairweather, Pete Strange, and the Lennie Hastings Trio is transporting. You can feel the band pausing to take in Strange’s remarkable trombone solo. Oh, how I wish I was around for that scene! Though at the time they probably felt like the good days were behind them!

Digby plays with large number of quotations, from the direct Louis Armstrong solo that opens “Isn’t She Lovely” to more hidden notes within the playful exchanges of the band. These musicians all inherited a respect for the early years of jazz from the generation that came before them. A respect I wish had more currency in American music programs.

The 33 track double CD progresses in chronological order from 1971 through to 2012. It is a testament to Digby’s continued artistry that I enjoyed the more recent material as much or more than the “historical” cuts from his early days. Digby is still active with his Half Dozen band, and they have an album of new material coming out soon on the Acrobat label. I look forward to it. While we wait I would consider this a must-have album for traditional and classic jazz fans, particularly those with an interest in the UK scene after the boom.