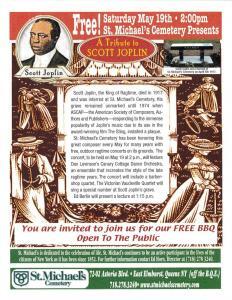 The Syncopated Times intended to run a review of the Scott Joplin Memorial Concert, held every year at his graveside in St. Michael’s Cemetery, Queens.

During the crunch of press time, there was a delay in obtaining pictures of the May 19th event. The month in which the story would have seemed timely slipped past. We’ve left ourselves the equivalent of Post-It notes to make sure we are ready to go ahead of the event next year. (Let’s hope the glue holds that long).

We wanted to highlight the annual memorial because of the presence of artists who should be familiar to our readers, particularly Dan Levinson, and Neal Siegal. Had we covered the concert it would have focused on their efforts, with perhaps a paragraph or so on Scott Joplin himself. Other news media have different audiences and a different focus. It makes sense to explain the significance of Joplin more fully if your audience may be unfamiliar with him. Still, any coverage of the event should have included the names of the living musicians who prepared for it and made it possible. It should have also reflected the spirit of joyful celebration at the event itself.

The New York Times ran a story about the memorial titled “The Forgotten Entertainer” which had a maudlin focus on the sad and sensational aspects of Scott Joplin’s life. While using Dan Levinson as a primary source and fact checker the article also failed to mention him or his band, The Canary Cottage Orchestra, by name.

The slight inspired Mr. Levinson to share the following note on his Facebook page, and write a letter to the editor of The New York Times. We share them in their entirety because he details well the efforts and stresses artists go through making important events such as the Scott Joplin Memorial Concert possible. The people making our kind of music don’t expect a bowl of green M &Ms when they show up to play, but they deserve to be named and credited for their efforts.

A Note from One of the “Forgotten Entertainers” I’d be lying if I said the omission of the band’s name, the musicians’ names and the vocalists’ names in the New York Times article on the Scott Joplin Memorial Concert at St. Michael’s Cemetery on May 19 – aptly titled “The Forgotten Entertainer Rag” – didn’t bother me. In saying this, I’m trying to put aside my own selfish agenda, but it’s worth pointing out that I built the Canary Cottage Dance Orchestra from the ground up, beginning a little over 14 years ago. I wrote all the arrangements – they’re not transcriptions of previously recorded performances – including arrangements on four Joplin rags specifically for this event, in addition to the two we already had in the book. From the beginning, I wanted a vocal quartet as part of the ensemble, and with the help of Neal Siegal, we made it happen.

I carefully choose each musician for this engagement – Conal Fowkes, Kevin Dorn, Joanna Sternberg, Leigh Stuart, and Rob Hecht. Neal assembled the Victrolian Vaudeville Barbershop Quartet with Paul Santino, Hal Cohen and Bill Lundy. I coordinated with the sound crew through the cemetery administration, and ended up having to bring my own sound equipment for the instrumentalists when the indoor rain location was chosen, two days before the event, and the professional sound crew was canceled. Neal brought the sound equipment for the vocalists. And Neal and I mounted a massive promotional campaign at our own expense to get the word out.

At the end of the show, the journalist interviewed me, and then we spoke over the phone twice the following Tuesday so he could fact-check, and I complimented him on taking the time to make sure every detail was accurate, including the band’s name. (The mis-ID below the quartet photo turns out to the photographer’s fault, not the writer’s.) In the end, we each received a one-way ticket to Oblivion.

Granted, this article appeared in the Metro section of the New York Times, not in the Arts and Leisure section, where our names would certainly have been mentioned. The readers of the Metro section are apparently more interested in sensationalism – the WHAT, WHERE, WHY, and HOW – and less interested in the WHO, i.e. the name of the band and names of the musicians and vocalists. And the article is about Joplin, not about us. I get that. But still…there was an opportunity to include my name, but all I got was “the band leader”; and all the musicians got was “the band”.

The tragic, negative and morbid tone of the piece is also a sore point with me. We were there to celebrate Joplin’s music, not to mourn the tragedy of his life. And we did. Nobody walked away feeling depressed or saying “Poor Scott.” It was truly a joyous occasion. But that’s not how the writer chose to present the mood of the event in the article.

I’ve never written a “letter to the editor” in my life, but this one pushed all my buttons and incited me to action. I sent the letter below to the editor at The NY Times two days ago. (The address is [email protected], in case anyone else would like to follow suit. Letters to the editor should ideally be 150-175 words and need to include the writer’s address and phone number – not the original writer of the article – YOURS.) Here’s what I submitted to the editor:

THE FORGOTTEN ENTERTAINER RAG
by Alex Vadukul for The New York Times
May 24, 2018
Letter to the Editor by Dan Levinson
May 30, 2018

There’s a sad irony in Alex Vadukul’s May 24 online article “The Forgotten Entertainer Rag” about the recent concert at St. Michael’s Cemetery in Queens in honor of the “King of Ragtime,” Scott Joplin, who’s buried there: the article forgets to identify the entertainers. For over two hours, the Canary Cottage Dance Orchestra, an ensemble I’ve led for 14 years specializing in music of the early 20th century, performed Joplin’s rags and other songs from the Ragtime Era for an attentive, sit-down audience. The dedicated musicians in my group who gave so much of their talents are referred to only as “a six-piece band” and “the band”.

Furthermore, the article is a complete misrepresentation of the joyous spirit of this annual event, which is both a celebration of Joplin’s music and a special opportunity for the community to come together. Mr. Vadukul’s article instead chooses to focus on the tragic aspects of the composer’s life (and death), selectively citing remarks from attendees that express pity for him. Indeed, Joplin died depressed and destitute, having not received the acknowledgment he deserved. But that’s not what this event is about. However, by neglecting to properly acknowledge the artists who helped to make this event what it was, The New York Times has perpetuated a key element in driving Joplin to his grave.

[I also sent this correction to [email protected]: in re “The Forgotten Entertainer Rag” by Alex Vadukul, published online May 24, 2018. A photo of the Victrolian Vaudeville Barbershop Quartet is mis-ID’ed as the “Victorian Vaudeville Quartet”.]