Fig & Fox: A Remembrance of Nat Morison, Patriarch of Welbourne

Nat Morison – patriarch, devotee of early New Orleans jazz, Mets fan, host of the annual Welbourne Cakewalk/Stoke Stomp, and treasured friend of many in the jazz communities of New York City and New Orleans – passed away at his home in Middleburg, VA on October 10 at the age of 83.

Nat supported jazz and jazz artists for many decades by attending performances in New York City – where he spent most of his youth – and New Orleans – the birthplace of his beloved music – and by hosting an annual, by-invitation-only, Great-Gatsby-esque outdoor house party on the Saturday after Labor Day. On even-numbered years, the “Welbourne Cakewalk” would take place on the grounds of Nat’s stately farmhouse in Middleburg, VA, “Welbourne”.

In 1833 Nat’s great-great-great-grandfather, John Peyton Dulany, purchased the original building, which had been constructed in 1770, and substantially enlarged it. Further renovations in the 1850s and 1870s turned it into the majestic structure that stands today, whose grandeur is reminiscent of something out of Gone with the Wind. On odd-numbered years the “Stoke Stomp” would take place at Nat’s brother George’s home, “Stoke”, in neighboring Aldie, VA. 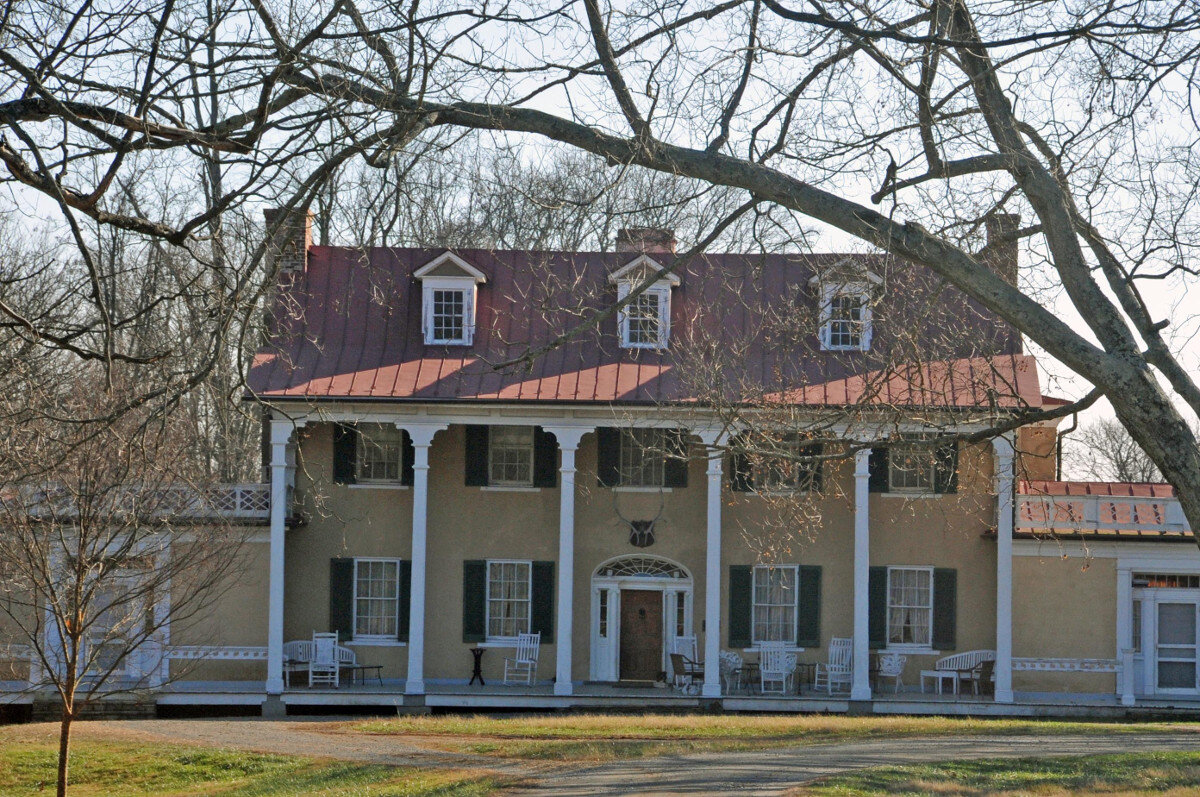 Inspired by a passion for early jazz that their father had instilled in them, Nat and George began hosting the parties in 1974. Two or three bands would alternate sets, beginning in the late afternoon and continuing until midnight. After that, musicians would often engage in informal jam sessions that would carry on into the wee morning hours.

Nat was what the jazz community would affectionately call a “moldy fig”, a term undoubtedly familiar to readers of this newspaper. He was passionate about jazz, but not all jazz. His interest was limited to the earliest of early jazz, specifically the music associated with such pioneers of the New Orleans style as King Oliver, Johnny Dodds, Kid Ory, Jelly Roll Morton and, later on, Bunk Johnson and George Lewis. The image of Nat sitting on the edge of the raised dance floor directly in front of the bandstand, sporting his iconic straw boater, smoking his pipe, and shouting for the band to “play some King Oliver”, will forever be ingrained in our minds. 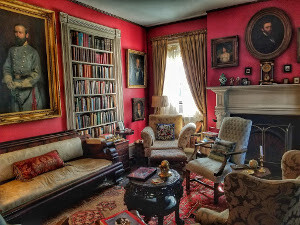 Nat was a real-life Virginia Gentleman, addressing both strangers and friends as “Sir” or “Madame”, or by their last name if he knew it, preceded by “Mr.”, “Miss” or “Mrs.”. He stood, in the presence of a lady. When appearing in public he dressed stylishly, in vintage formal attire with vest and pocket watch. He was what many would call a character, though he never seemed pretentious in demeanor or appearance. Nat made enough of an impression on writer/director Richard Squires, however, to motivate him to write a screenplay. The 2004 film Crazy Like a Fox, starring Roger Rees as “Nat Banks”, is a fictionalized drama, inspired by Nat and Welbourne, about a man who is evicted from his eighth-generation family home and farm in Virginia.

I first met Nat and the Morison family 30 years ago at The Red Blazer Too Restaurant in New York City, when I was performing with a band led by banjoist John Gill. I’m honored to have been invited to perform at the Welbourne Cakewalk/Stoke Stomp 17 times during the event’s 45-year history, first with Terry Waldo’s band and later with my own bands. Nat’s passing marks the end of an era. I already miss him deeply.

I feel fortunate to have been able to celebrate Nat’s life and his devotion to early jazz on October 25th at Welbourne with hundreds of others who knew and loved him. From points north, east, south, and west – including Vermont, New York City, New Orleans, and California – came family, friends, and musicians to pay tribute to the Patriarch. It was at once a traditional New Orleans funeral – complete with marching jazz band – and a traditional Irish funeral with a bagpiper. Nat had planned the whole thing down to the last detail, including the specific songs he wanted played by the jazz band and the piper.

It began, as per Nat’s wishes, with the piper playing on Welbourne’s familiar front porch. Then the jazz band, led by clarinetist Michael Magro, paraded down the long driveway toward the house, playing “Wabash Blues” and “Just a Closer Walk with Thee”, in front of a horse-drawn wagon bearing the casket. Once on the porch, we played the songs Nat had requested – “Just a Little While to Stay Here”, “The Old Rugged Cross”, “Nearer My God to Thee,” and “Over in the Gloryland” – between readings of prayers and psalms by Morison family friend Right Reverend Martin Townshend and Reverend Richard Weymouth, Nat’s brother-in-law. 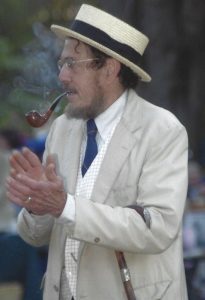 Following the service on the porch, the family, a few of the musicians and some of the guests got into cars and drove in a procession behind the horse-drawn wagon along a dirt road from Welbourne to the family graveyard three miles away. At the gravesite, the piper played “Amazing Grace” and then the band played “How Great Thou Art”. After the gravesite service, the piper played “Danny Boy” as the casket was lowered into the earth. After the casket had been lowered, the band sailed into a lively version of “Over in the Gloryland”. Then the family, the guests and the musicians headed back to Welbourne for a celebration of Nat’s life.

An estimated 500 were in attendance, but that’s a very rough estimate because people came and went all afternoon and into the evening. In addition to Nat’s wife, Sherry, the family members present included his daughter Rebecca, his sons Ames and Joshua, Joshua’s wife Amanda, Nat’s brother and sister-in-law George and Hope, Nat’s nephews Dulany, South, Holmes, and Beal, Dulany’s wife Eleanor, South’s wife Maggie, and Holmes’ wife Megan. The musicians who lent their talents to the parade, the front-porch service, the gravesite service, and the celebration of life at the house were Ben Polcer, David Sager, Tomas Majcherski, Kiowa Wells, Mark Kotishion, Jason Jurzak, Peter Ford, Rich Levinson, Steve “Spoons” Torrico, and Molly Ryan.

Below is an eloquent and moving tribute to Nat that his son Joshua wrote for the event’s printed program. Joshua’s imagery paints a perfect picture of the Patriarch of Welbourne.

It’s impossible to picture a world without Nat. He was a patriarch in the good, old sense of the word. One followed his lead because, almost inevitably, his way was the right way. He would certainly tell you so. But for someone so forthright, stubborn and outwardly old-fashioned, he also evolved in a manner that is exceedingly rare, opening his mind to new ideas and his heart to further compassion. He was an iconoclast in a world that needs more of them.

Nat Morison was a certain New York, a certain New Orleans. See him in the April heat, sky-blue stuffed rabbit peeking out from his jacket’s breast pocket as he tapped his foot to buskers’ “jass” along Royal Street. See him, one foot on a brass rail, one elbow on the bar, a topped-off wine glass of Manhattan sliding his way across polished mahogany as rain falls on Gramercy Park outside the window. 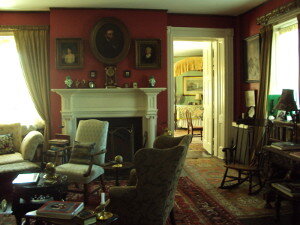 But above all, Nat Morison was Welbourne. Listen to the pipe clicking between his teeth as he banks a blaze against the Parlour’s backplate to warm his guests some winter night. See him flash in bandana, rolled-up khakis, bare feet, to deftly field a grounder in the front lawn’s high grass. Or on Christmas Eve, reading to children of Katherine Hope by the juddering light of candles on the tree, his gravelly voice breaking, a single tear working down his cheek. Few witnessed his true peace: quiet at his desk, Mets game murmuring and toddy’s ice popping as his sepia fountain pen scratched across his ledger. Fewer saw him face the end with another, light-jacketed even in tunneling wintry gusts, clasping his floppy hat to his head, kneeling to a downed horse, a gnarled hand gently stroking its furrowed brow.

The world is changed now. Nat, for his part, would not have it more solemn. Sure, he’d like to know the reservoir is full, the horses fed, the furnace not running overmuch. He’d just hope the bourbon is holding out, the hounds are baying, and Welbourne is as it was.

So see the boater, walking stick, waistcoat, spectacles, braces, impish grin; smell the trail of smoke winding from the Victrola through the house; and hear, before it goes, the click of a gold watch fading on the breeze- Joshua Morison