A question that phonograph collectors and historians often get asked is, “what was the most popular song to be recorded in the 1890s?” This question can be difficult to answer depending upon the criteria, and the sort of analysis you want to do. In this period, there was a distinct structure of the class of each type of popular music. Opera and classical were always the highest on this scale, and ragtime was the lowest, but even though people would almost always claim opera was their favorite, the reality of what was most popular could come as a surprise to some.

The record that almost always shows up in lots of brown wax is some version of “The Laughing Song” (or “The Holy City” if you really know your cylinders). People often speak of this song in terms of its obvious popularity, as it can be found all over the place on the internet nowadays. While this can come as a little annoying to seasoned collectors, it continues to be rightfully placed in history. The piece was initially recorded by the first black recording artist George W. Johnson, and soon he became known for this very song.

While we don’t know the exact origins of the song, it started to show up in record catalogs as early as 1892 (for reference, Johnson started making records the previous year). At this time the song seems to have spontaneously appeared in Johnson’s repertoire, which at that time was much smaller than even the relatively few titles he recorded in his entire career. 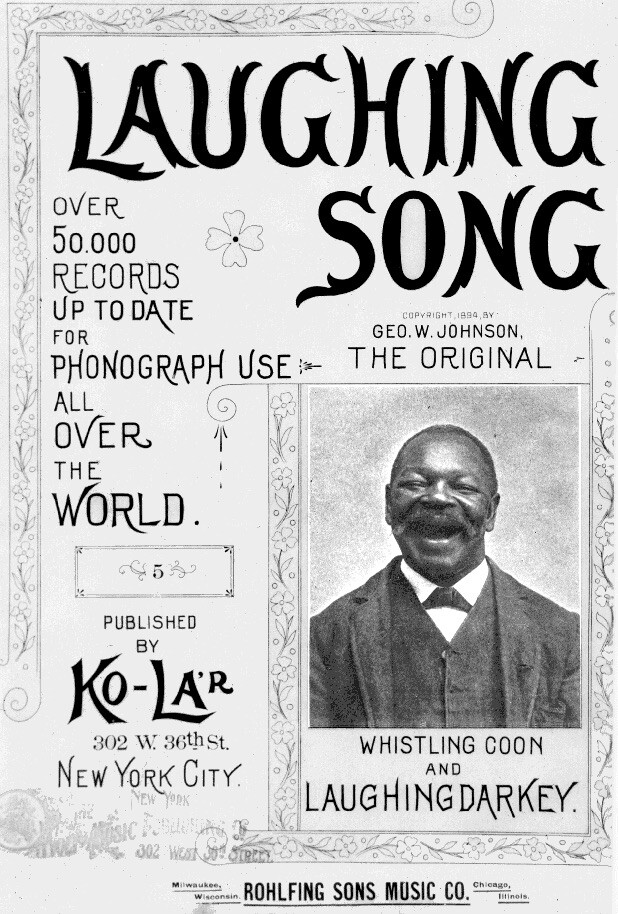 The piece was already quite popular by 1894, but in that year the piece would be rocketed into levels of popularity that we associate with it now. Thanks to the hand of studio pianist Frank P. Banta, the piece was finally written down into the arrangement that made it famous. It can seem somewhat random that Banta was given the credit for this, yet at the same time, his ever presence in phonograph labs at the time would make such a thing easy.

Banta was still a very unknown and rather new addition to the phonograph world in 1893, but he had likely been playing “The Laughing Song” with Johnson at least since ’92 (also the year when Banta joined the phonograph world). Banta was a very capable arranger and accompanist, being able to transcribe anything into any key that was needed, and could play anything hummed out of the blue. These freakish talents made all the phonograph folks love him unconditionally, and with this in mind it proved well in crafting the perfect arrangement of Johnson’s “Laughing Song.”

While Banta was not given the composer credit on the cover, he is most definitely credited on the inside as the arranger. Awfully nice of him to omit his name from the cover to give the spotlight to Johnson, who had little success and triumph in his life by that time. The sheet was published by the mysterious Ko-La’r which continues to puzzle historians to this day. It could have been a location Banta took the sheet to that agreed to publish it, but we still do not know. It is likely some sort of acronym, but for what is unknown. The sheet makes bold claims with its statement on the front:

Over 50,000 records up to date for phonograph use all over the world.

And keep in mind that this was still when the song had only been recorded by Johnson for about two years.

By just about the next year, versions of “The Laughing Song” by other performers were showing up in record catalogs, such as that by whistler John Yorke AtLee. Banta knew he had done well with this piece, though he was never given credit for its composition in any catalogs and on any record labels. Despite this, his very arrangement was the one that we hear on so many different versions by Johnson and others.

The signature yet rather simple composition style it lends is great for improvisation and embellishment and ideal for studio accompanists—so, thankfully, no two versions of the song are the same. This was likely the intention of Banta’s arrangement, as even in 1894 when he (supposedly) wrote down the piece he was already following the edgy young bucks who were playing the syncopated music that would soon be called “rag time.” It is tantalizing to think that already in 1894 Banta was playing ragtime, and considering that scholars keep pushing back the date for the official beginning of the ragtime era itself, it wouldn’t come as a surprise.

Nobody thinks to credit Banta for this incredible collaboration, but it was quite significant, even if he was never really given any direct credit for the song on records or in catalogs. Johnson went on with this song and made quite a name for himself, being known for this song and others such as “The Laughing Coon” and “The Whistling Girl,” both of which unfortunately have unknown origins, but were also likely written by Banta, as they have exactly the same structure and composition as “The Laughing Song.”

While yes the lyrics of all these songs contain all the usual very offensive period stereotypes, they also hint at a lot of what was to come in the world of ragtime songs. All the cake-walks, fancy women, ballroom brawls, and throwing of razors would soon be all over the place in the popular music world. These songs, particularly “The Laughing Song” provided for Johnson a very secure career and paycheck for the rest of his life, even after he left recording. And even after the records really fell out of favor, laughing songs on records continued to remain a great novelty, but their initial association with ragtime and with Johnson faded with time.