In 1895, a twenty year old Fred W. Hager organized his military orchestra of 26 musicians. At that time, Hager was the youngest professional bandleader in New York, and with the sort of musicians he had in the orchestra, all the major bandsmen and music folks took notice. Hager had sourced his musicians from a variety of places, and with his recent graduation from the New York conservatory, he was able to choose the best. One important source that proved valuable for Hager was the Twenty-Second regiment band, who was later to be known as Victor Herbert’s military orchestra. Hager used many of Herbert’s musicians from the very beginning.

It took until 1898 for Hager’s military orchestra to show up in recording studios. He brought them to Edison’s lab, which at the time was recording some of his violin solos. Hager’s increasing success with his orchestra and violin solos became the talk of the recording industry in 1898, and his name started showing up in the exclusive trade magazine The Phonoscope. The September 1898 issue featured a nearly full page portrait of Hager to accompany an article singing praises for the award winning quality of his violin solo recordings.

Hager soon caught wind of the newly formed Universal Talking Machine company (the professional name for the Zon-O-Phone label), and he took all his pride and hand plucked musicians along with him. From nearly the birth of Zon-O-Phone, Hager felt frisky enough to use the name Victor Herbert’s Band on their label. With all that ambition, Hager in 1900 or so decided to take his Herbert and Gilmore’s band musicians to the Columbia Phonograph company. By 1901, Hager had a near monopoly of the musicians each major studio used and could hire. But he was only to keep-a-moving from there.

Meanwhile in Pittsburg, Victor Herbert was beginning to take notice, and he was furious. We know Victor Herbert would go on to be one of the core founders of ASCAP, and it seems that these ideas began to surface in his mind. Hager’s sneaking around was unacceptable. He did not take any immediate action, but he continued to hear about all of this illegal activity from the sidelines.

To make matters worse, Hager openly advertised his services to all of these companies in local papers and in his weekly Bronx park programs. A piece of one advertisement survives in Hager’s own scrapbook. He wanted to make sure all his regular fans and fellow music folks knew that the record labs were so fond of him and his orchestra. It is likely that this very conduct was specifically not permitted in his contracts with Columbia and the Globe record company (who made Climax records).

In 1902, Hager began to take some studio jobs at the New York location of the Lambert indestructible record company. He recorded for Lambert while at the same time loaning a portion of his musicians to the Edison Phonograph company. His distinct, perhaps drunken sounding, violin playing screeches through on Lambert records by the American Parlor Orchestra. It was also in this year that a large group portrait was taken of Hager and his orchestra in the main lab of the Columbia phonograph company. The publication of this image included an extremely detailed description of each musician in the orchestra, describing the employment of each musician. It is from this publication that much of the information for this article was derived. 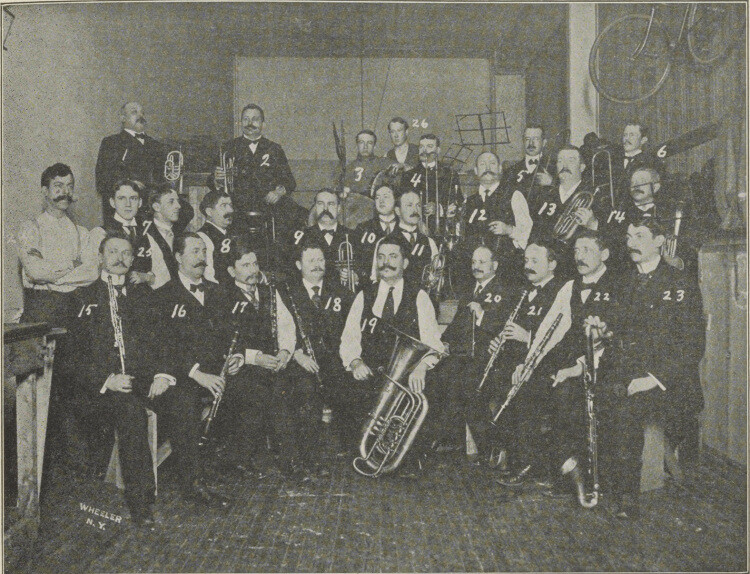 Hager’s final step to reach his climax in musician monopoly was to take on the stubborn folks at Victor. With Edison, Zon-O-Phone, Columbia, Lambert, and Leeds under his partial control, it seemed he had the upper hand while working out a deal with the Victor management. Whatever he did, he was able to pull out a very nice contract with Victor. His contract at Victor was to record in Philadelphia every week for three months in 1903. Victor even started a new numbering block for Hager’s full orchestra, staring at 2000 and ending around 2200.

Under the Victor management, Hager’s orchestra was known as The Victor Grand Concert band. Under this name they recorded a fair amount of the ultra-rare 14 inch DeLuxe Special Victor records. These mystifying records were 14 inches wide, and played around 60 rpm, making for as much as eight minutes of playing time. It seems no surprise that at nearly exactly the same time Columbia issued a bunch of 14 inch records under the Columbia orchestra name, which as we know was really Hager at this time. These records were very innovative for the time, but ultimately did not sell well, as they were inconvenient to play and to store for the record buying public.

Hager was ever so glad to have reached the top. Each company’s musicians were under his control, it seemed his fighting ambition and tact had paid off. With all this sharp bluster and bluff, Hager got what was coming to him, and it hit him hard. Just a short while after Hager’s term at Victor and Lambert, Victor Herbert put his foot down. Herbert sued the Zon-O-Phone company for illegal use of his name on their label. This lawsuit was aggressive, and obviously Herbert was favored by the court, as he had nothing to do with the use of his name on the label. This was a slap in the face for Hager. All that ambition for musician monopoly had come to a jolted stop.

After the lawsuit, Hager openly worked for Zon-O-Phone and Edison (and he did continue to supply Columbia’s new music director Charles Prince with a majority of his musicians). He had for now learned his lesson, he did not return to such toxic over-ambition until the early and middle 1910s.

From the start of the Zon-O-Phone, they were engaging in illegal activities, their very foundation was built on illegal piracy. But the success of the company’s innovative patents were a cushion that provided Hager with a veritable pot-luck of ventures to pursue. The environment was perfect for Hager to go along with the illegal activities, and for a long time he was unapologetic about it. Hager was known for his burning ambition, willing to take every opportunity he was given, at whatever cost. He remained this way into his old age, even in 1944 and 1945 pursuing large projects like a play with incidental music.

With all of this in his background, it is quite ironic that many decades later he was associated with and paying his dues to ASCAP, the organization that Herbert helped to found after suing him.