From Trumpets to Strumpets the New Orleans Burlesque Festival

We’re all familiar with the New Orleans Jazz & Heritage Festival and the French Quarter Festival, two of the Crescent City’s most popular celebrations of music.

But every September the focus shifts from trumpets to strumpets at the New Orleans Burlesque Festival. This year, the 11th annual bawdy bash takes place Sept. 13-15, at two venues, the House of Blues, 225 Decatur St., and the Civic Theatre, 510 O’Keefe Ave.

“We’re bringing our audiences the most beautiful and talented stripteasers from coast to coast, dancing to the sounds of a hot New Orleans jazz band,” says festival founder Rick Delaup, dubbed by the Times-Picayune as “the godfather of New Orleans’ modern burlesque scene.”

As far back at the dawn of the Great Depression, striptease shows have been staged in the City that Care Forgot. In the 1930s, the Dauphine Club featured dancers cavorting on stage in nothing but fig leaves. In 1942, Izzy Hirst and Harold Minksy opened the Casino de Paree on Bourbon Street, according to girlie show historian Rachel Shteir.

After the war, Manhattan street photographer Weegee (a.k.a. Arthur Felig) compared Bourbon Street to “the Bowery with a cover charge where the strippers strip around the clock.”

From the mid-1940s through the 1960s, burlesque was a main attraction in the French Quarter. Its epicenter was Bourbon Street, nicknamed “Harlot’s Row,” and it featured the largest concentration of exotic dance clubs anywhere in the U.S., venues such as Poodle Patio, Hotsy Totsy, Chez Paree, the Mardi Gras Lounge, Casino Royale, the 500 Club, and the Sho-Bar.

To start those tassels spinning, the musicians at Leon Prima’s 500 Club played outrageously uptempo music driven by an insistent jungle beat. While the dancers all wore pasties and G-strings, the cats in Sam Butera’s band all wore fezzes.

“The French Quarter had a seamier side in those days,” says Delaup. “Pimps, prostitutes, criminals and mob figures inhabited the Quarter. And B-drinking, in which strippers tempted men to buy them drinks for a cut of the profit, was rampant—and illegal. And, since everyone dressed up to attend a show, the girls often didn’t know if they were sitting next to a wealthy oil man or an oily thug.”

Having researched the history of the New Orleans strip scene for 23 years, Delaup has interviewed dozens of former dancers, comics and musicians. His initial interest in burlesque was sparked by meeting Evangeline the Oyster Girl, also known as Kitty West, who headlined Bourbon Street clubs in the 1940s and ’50s.

During the 1960s, New Orleans District Attorney Jim Garrison made quite a show of “cleaning up” Bourbon Street. The clubs were raided, and girls were arrested on charges of obscenity.

In 1995, New Orleans was one of the first cities to participate in the modern-day burlesque revival. Shows featured burlesque dancers accompanied by a live jazz band, as in the heyday of Bourbon Street’s bawdy bistros. Thanks to New Orleans native Delaup, the tradition continues today.

In 2001, he organized a burlesque workshop called Tease-O-Rama, at which he hosted a panel discussion with legends of burlesque and a workshop with the original Evangeline the Oyster Girl. It was at this event that he first befriended Dita Von Teese, the California brunette now widely considered the world’s top burlesque star.

In 2005, Delaup produced his own flagship show, Bustout Burlesque, reminiscent of Bourbon Street in the 1950s. With the strippers backed by a live traditional jazz band, Bustout Burlesque ran monthly at One Eyed Jacks, formerly the Shim Sham Club.

Later that year, Delaup lost his home to nine feet of water in the aftermath of Hurricane Katrina. In the house were all the costumes and props for the show. While most of the city evacuated, Delaup returned to New Orleans to rebuild Bustout Burlesque. Six months later, he debuted a new version with a new cast and band that performed weekly at Tipitina’s French Quarter. At the time, it was one of the only theatrical offerings in the city. The show now plays monthly at the House of Blues.

Delaup founded the New Orleans Burlesque Festival in 2009. The festival’s centerpiece is Saturday night’s competition in which dancers compete for the title of Queen of Burlesque, starting at 9 p.m. at the House of Blues. Showcases, workshops, panel discussions and parties round out the weekend.

Master of ceremonies for the Queen of Burlesque competition will be San Francisco-based illusionist Calvin Kai Ku. The show will also feature a performance by New Orleans soul singer Naydja CoJoe.

“We assemble the most glamorous and eye-popping burlesque dancers in the world to perform over three nights in sultry New Orleans,” Delaup says. “Comic emcees, singers, and variety acts flesh out the shows to provide the most entertaining, classy, and risqué showcases you’ll ever see as we celebrate this classic form of adult entertainment that made Bourbon Street famous worldwide.” 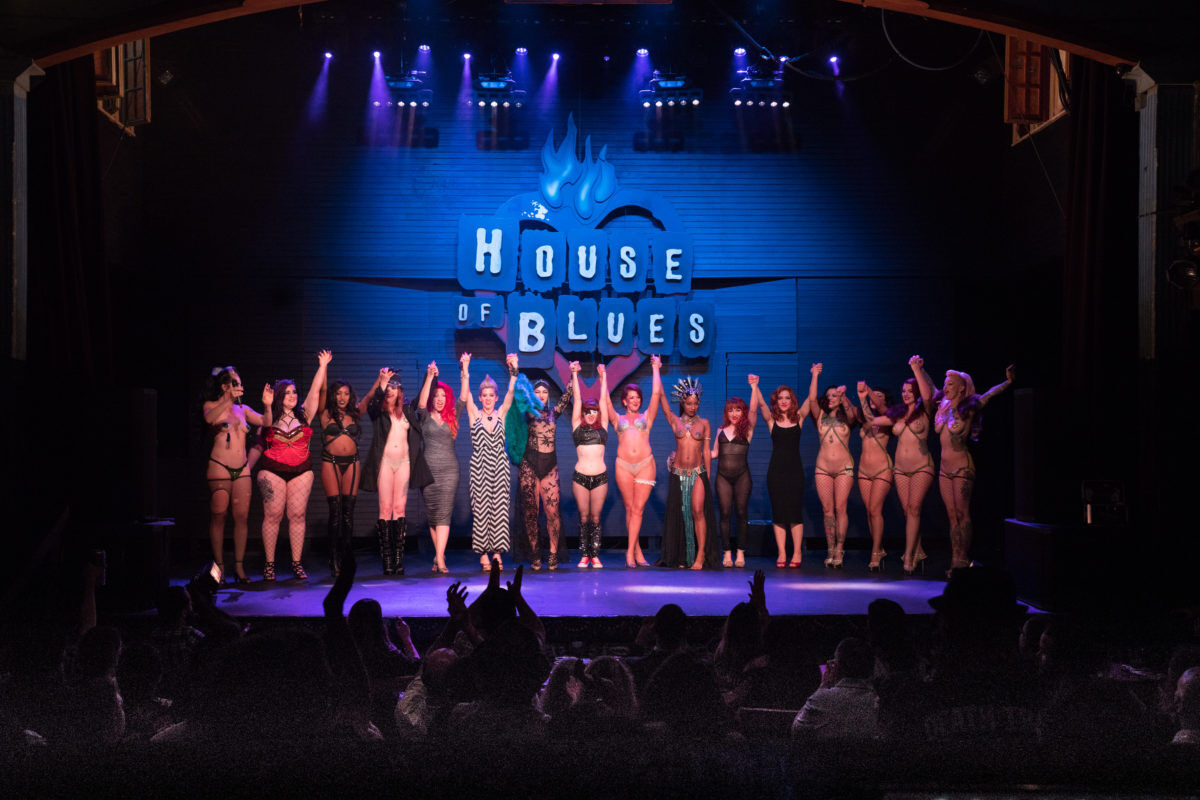 Festival-goers will keep their eyes peeled to watch dancers such as Donna Hood, L.A.’s blond mondo-burlesquer, British fan-dancer Banbury Cross, or Raquel Reed, the NYC Rockabilly Roller who was crowned the Queen of Burlesque in 2017

The 11th annual New Orleans Burlesque Fest runs from Friday, Sept. 13, through Sunday, Sept. 15, at the Civic Theatre and House of Blues. Tickets for the various events range in price from $22 to $67; neworleansburlesquefest.com/.