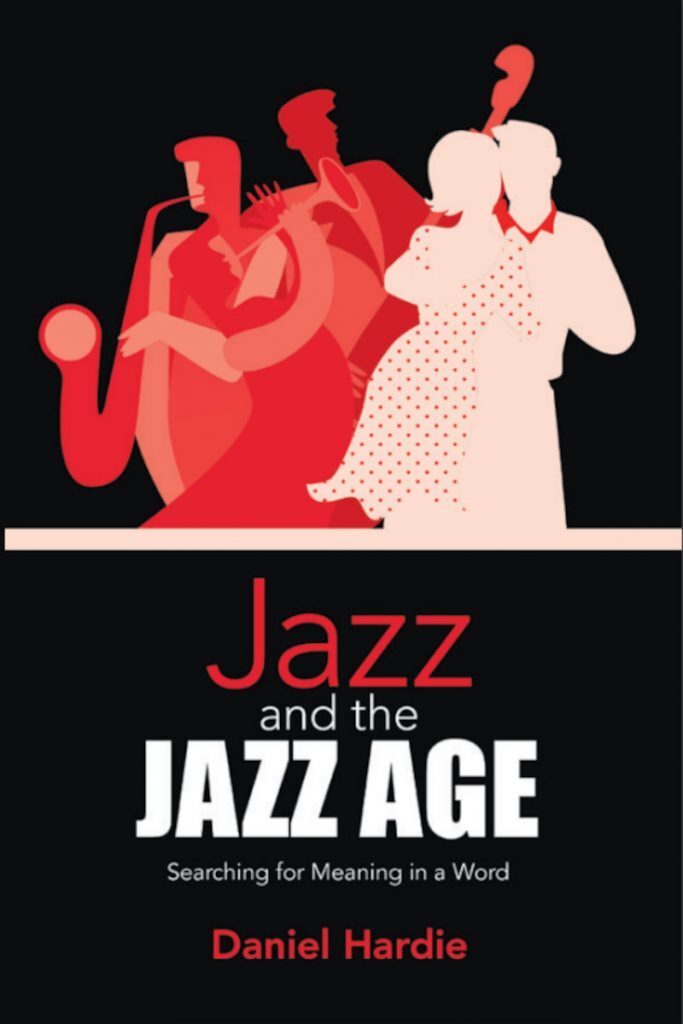 Jazz and the Jazz Age: Searching for Meaning in a Word is Daniel Hardie’s sixth book about early jazz in 20 years. His previous titles, Exploring Early Jazz (2002), The Ancestry of Jazz (2004), and the Birth of Jazz (2006), give you an idea of his focus on the origins of the music, particularly the Bolden era in New Orleans, and the diaspora of New Orleans musicians, both white and black, that preceded the recordings of the Original Dixieland Jazz Band in 1917.

His most recent work before the present edition, Jazz Historiography: The Story of Jazz History Writing (2013), instead gets at the original sources, the people that during the jazz age and later created the story we learn today. That book deeply informs this one, which attempts to ask the question, what did jazz mean to people living through the 1920s?

His past research is drawn upon to tell the story of jazz in the public imagination of the 1920s, “The Jazz Age.” While he sometimes goes forward as far as the 1940s to highlight how our own conception of the period was formed, he primarily relies on first hand accounts from the twenties, asking as they might have: What is good jazz? Where did it come from? How does it relate to the fast pace of modern times?

As a comparative history of what people in the 1920s felt jazz was and what it meant in the big picture the book largely fails. The focus is too much on actual rather than experienced history. It is too focused on the music itself and how it was talked about rather than how it was experienced in dance halls, on records, and over the radio. To tell that story, what a flapper felt about jazz is more important than what a critic wrote about it. He does not pursue those street level sources, aside from citing a handful or period hot takes about “Jazzmania”, and referring frequently to Billboard sales rankings.

Capturing the meta story doesn’t seem to be in Hardie’s nature. Instead his gift is in tying together facts and trends; the comparative instrumentation of early bands, the significance of a style’s transfer between cities at a certain time for the resulting sound.

Hardie’s experience recreating the sound of the Buddy Bolden band, in print and on stage, gives him a unique point of entry. For example, early jazz critics frequently stressed the importance of drummers to separating the jazz sound from what had came before. Even though a drummer isn’t the first thing we think of in this era, several of the sweet bands were led by drummers, and Hardie shows us why.

Before the prominence of saxophones the jazz sound was dominated by drum and banjo or piano and violin combinations, and the early European jazz bands retained the string band instrumentation of James Reese Europe’s Cleff Club concerts into the twenties. Hardie’s investigations of these topics grows your understanding of jazz as music, if not your understanding of jazz as metaphor for a decade.

The book tells the story of jazz itself illuminatingly. Beginning with a prehistory in New Orleans, following the rails to California and the riverboats to Chicago, then on to New York and the world stage. Starting at that early date, rather than arbitrarily beginning in 1919, which F Scott Fitzgerald defined as the birth year of the Jazz Age, will be of great benefit to a reader who has only knowledge of later events and artists.

Hardie frequently lets his sources speak for themselves. An excellent two page quotation from Paul Whiteman‘s biography about his first exposure to jazz in California increased my fondness for him. Rather than gloat from his perch as “King of Jazz” Whiteman says, “All I did was to orchestrate jazz. If I had not done it, somebody else would have. The time was ripe for that.”

The greatest success of the book, where it may influence the thinking of those even well read on jazz history, is how it demonstrates that the Jazz Age was dominated by sweet jazz rather than hot. On some level we all know this intuitively, but when we picture the flapper sitting at the bar we imagine her listening to Louis and Oliver in Chicago, or Fletcher Henderson in New York. Generally speaking were she to land in one of those places a girl of the times would request some recent hit by Art Hickman or Vincent Lopez.

Gilbert Seldes wrote in 1923 that “although nearly ever negro jazz band is better than nearly every white band, no negro band has yet come up to the level of the best white ones, and the leader of the best of all, by a little joke, is called Whiteman.” The opinion he expressed was shared by critics throughout the decade, but nearly no one alive today would agree. Why is that?

Early critics saw the sweet jazz of Whiteman as an evolution from the clackity clack of the early white bands like the ODJB, manifestly superior because it retained some of the jazz feeling while reining in the silliness. Though some of this hot style was retained by the New Orleans Rhythm Kings and other white groups, surviving the jazz age and blooming during the revival, it would not dominate the soundscape. After short crazes for novelty jazz, and for classic female blues, the sweet bands dramatically outsold the hotter bands in the general marketplace for the rest of the decade.

Hot clubs, beginning on college campuses in 1926 and taking greater prominence in the 30s would come to define how we understand jazz almost a century later. They began the jazz discography movement and formed narratives about which jazz was more authentic, more worthy of praise and emulation. They literally wrote the histories and their conclusions framed our perceptions of jazz from the revival period on. Hot Jazz was determined to be the “natural jazz” a quasi folk music superior to the popular sweet music of the day. The black musicians were tapping into something authentic. Sweet jazz was cut out of the story, becoming largely forgotten over time.

Much of our received wisdom about jazz in the 20s would be unrecognizable to people who lived through the decade. Radios and record stores were filled with the music of Whiteman and other sweet bands. As Hardie puts it “Many of the performers enshrined by the later tradition were unknown to the record purchasers of the day.” The records we prize the most, those of Louis’ Hot Five, and Morton’s Hot Peppers, came to be widely appreciated only after the Jazz Age ended with the crash of ’29.

Hardie uses as illustration a prominent jazz record collectors’ club at Princeton that had only one member in 1928 who owned recordings by Louis Armstrong. He was characterized as “a specialist in pretty rough stuff”. Most of the “important” groups, both white and black, are only known now due to the work of later collectors and researchers. Not decades later, only a few years off set, but enough that their preferences do not represent an accurate appraisal of what jazz meant to those experiencing it at the time..

A short but very interesting section explores the first bands to circle the world spreading jazz to Europe and the Commonwealth countries between 1917 and 1923 or so. This was the section that had me reaching out to YouTube with great reward. The experience of finding these ultra obscure outfits from a century ago had me wondering how our modern experience will change our perceptions of jazz yet again.

For decades there were gatekeepers reissuing certain types of recordings in a self fulfilling demand cycle. Today nearly every recording made in the 20s is equally available to everyone for free. This favors those groups who recorded the most, often groups that were popular at the time. There are no gatekeepers. What will it mean for the music going forward? Who knows.

If you are looking for a short overview exploring the development of early jazz in the late teens and twenties, as well as the real position in history of major artists and bands, this book is a great primer. Anyone who has yet to read these histories elsewhere will find this book engrossing and perception shifting. While it could have benefited greatly from an editor, Jazz and the Jazz Age, is an important new approach to conceptualizing early jazz.

Jazz and the Jazz Age by Daniel Hardie
iUniverse (2020)