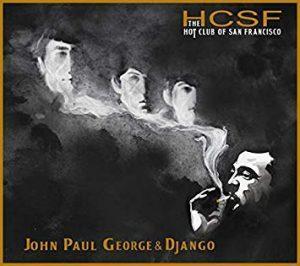 I’ve heard sports fans discussing football “Dream Teams,” a hypothetical assembling of great historical players and coaches, putting together theoretical plays, and games, styles, and skills, to make an ideal super-team. Jazz fans have similarly speculated about historical jazz musicians from different times playing together and influencing each other’s music. At some point, Paul Mehling, leader of the Hot Club of San Francisco, asked, “What would Django do?

What if he hadn’t died and had lived long enough to interpret Beatles songs? Because you know he totally would have.” But since Django is gone, Mehling and his gypsy-swing ensemble stepped up to act for him, crafting and road-testing arrangements and tune selections of Beatles tunes for years, resulting in their new CD, John, Paul, George and Django. Mehling makes it clear that the CD title isn’t intended to diminish Ringo Starr’s essential contributions, however, the album is about his bandmates as composers.

It’s rather gutsy for Mehling to take on this exciting challenge, as purist fans with strong feelings may question any changes to the original music or musicians that are the apples of their eyes, as: “That’’s not exactly the way the Beatles played it!” or “The instrumentation isn’t the way they originally arranged it!” and so on. Hopefully, they will come to realize that the intent here is to honor and respect the achievements of both groups, and show a new potential for their abilities. The Beatles early on inspired a very young Paul Mehling and drew him to play guitar, and later, the intensity and gypsy-jazz style of Django Reinhardt brought Mehling to gypsy jazz/swing, so this must be a project of love and respect for both to drive his question of “what if…”

The continuous, crisp acoustic rhythm guitar support, the distinctive original sound of the lead Selmar-Maccaferri guitar design originally used by Django, the ever present stand-up acoustic driving bass, and the violin highlights and solos by Stephane Grappelli, all part of Django’s Hot Club of France, were applied to Beatles tunes to bring the creative genius of both camps together for this unique, brilliant 54 minute CD. Thirteen of these Beatles’ songs were written by John Lennon and Paul McCartney: “All My Lovin’,” “Because,” “Michelle,” “I Will,” “Here, There and Everywhere,” “You Won’t See Me,” “The Fool On The Hill,” “Julia,” “You Can’t Do That,” “For No One,” “Hey Jude” combined with “Duke & Dukie” by Django, “Things We Said Today,” and “Yellow Submarine.” Two others were written by George Harrison: “If I Needed Someone” and “Don’t Bother Me.”

Musicianship is simply wonderful, the combinations sound seamless and natural, arrangements are superb. Most of these tunes are played as instrumentals, with the beauty of the Beatles compositions, and the driving soul of Django Reinhardt and Stephane Grappelli’s Quintet of the Hot Club of France combined into a unique new form. The three with vocals are: “If I Needed Someone,” with group vocal, and both “For No One” and “Things We Said Today” beautifully sung by rhythm guitarist Isabelle Fontaine, making you believe them as her personal stories and her words.

With the first time listening, as an enthusiastic fan of both Django and The Beatles, I was dividing my listening to each component, but sort of one at a time. At second listening, I was better able to listen to the delightful combination as a whole, to realize just how well this has been accomplished by a very motivated Paul Mehling and his choice musicians, and how much effort it must have required. It is so well done and enjoyable, I enthusiastically recommend it!