Jonathan Ng: Dreaming On My Feet 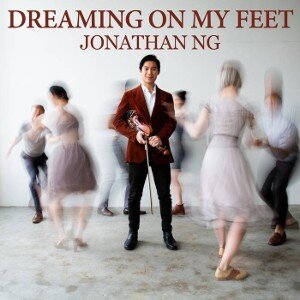 Jonathan Ng, is a lindy hop, balboa, and blues dancer with classical violin training. He traveled widely with Ellis Dyson & the Shambles, a band that merges guitar ragtime with a swing sound. He’s also played with a number of leading musicians in the dance world.

Looking at the lineup of violin, accordion, guitar, bass, and drums, I was expecting a gypsy jazz feel to Jonathan Ng’s first EP, Dreaming On My Feet.  But what he seems to be doing is another merger– joining his appreciation of both Django and Basie in six interesting arrangements.

“Jordu” kicks off with the familiar violin sound, but as he progresses against a steady dancers rhythm you know that what’s in store is a little different. Ng is a creative violinist, “Dreaming On My Feet” brings in touches of several sounds, including a bit of western swing. Particularly on “Honeysuckle Rose” the versatility of the accordion comes into play.

People often forget the critical role violin had in the earliest jazz bands, and it was the 40s before it became unusual to find accordions in jazz and swing groups, including of course the Moten Band.

You can tell an album has dancers in mind when instead of a track length it lists BPM next to each song. “Stars Fell on Alabama”, stripped to its essence, clocks in at only 79 beats per minute, the rest range from 130 to 214.

“You’d Be So Nice To Come Home To” is an instrumental romp for each musician, even giving the bass some time to solo. “After You’ve Gone” closes the album. It has the most successful vocal, and the interplay of violin and accordion also make it a memorable take. It’s no surprise it was released a little ahead of time as a single.

Ng has what it takes to make it in the music business. I get promotional materials for all kinds of albums I’ll never open let alone review. It saddens me that some hopefull artist is paying an agency to send me their latest experiment in electrofusion jazz-funkadelia. Jonathan Ng does for himself better than an agent ever could. With me he reached out by way of a mutual contact, he followed up, and he sent his disc with extra information as a professional looking package of materials. Listening to a recent Hey Mr. Jesse Podcast it seems he did the same with them. He knows just who to contact.

He knows his audience, from the dancers in front of the bandstand, to readers and listeners at home. And he’s a knockout lead on violin when there aren’t that many to be found. He’s got a promising future leading his own bands and I’d love to hear him filling out the sound of some others.