King of Ragtime: The Story of Scott Joplin by Stephen Costanza 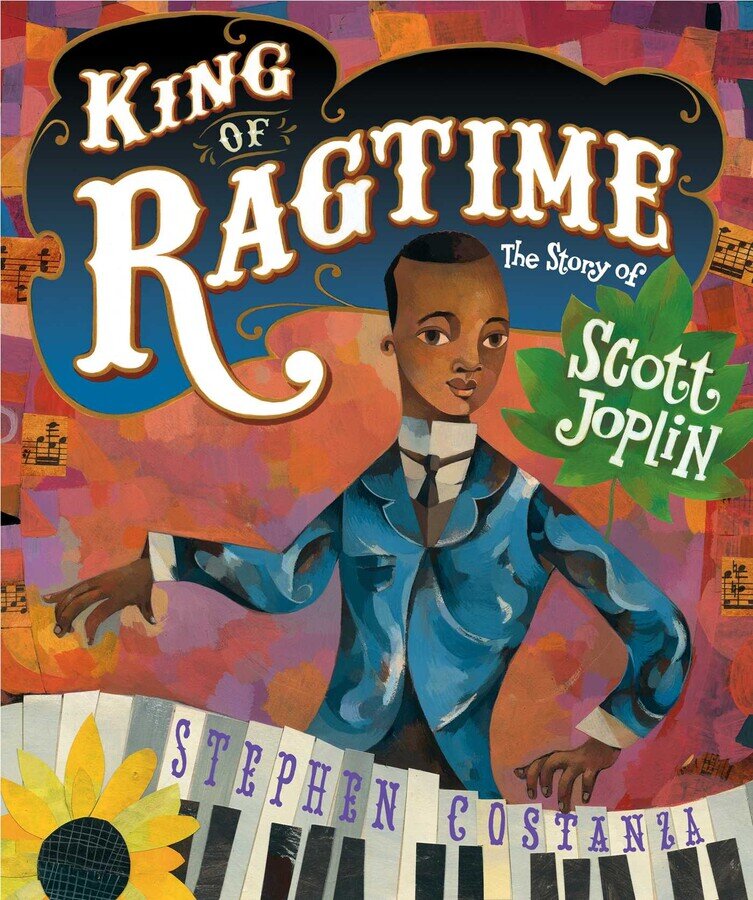 Though far beyond the publisher’s target age group of 4–8, I am thoroughly enchanted by this book about Scott Joplin. The drawings are playful, the colors glorious, the text almost poetic, and the history is reasonably accurate. It opens with a two-page spread—about 20 inches wide and 12 inches high—showing Southern Blacks in the immediate post-Civil War period at work in the fields and homes. The text begins,

In the valley of the Red River
where the soil was as rich
as most folks were poor,
four states sat side by side
like colors on a quilt . . . .

That hint prompted me to notice that the colorful design of these two pages is like that of a quilt, a theme that occurs in many of the book’s two-page spreads as well as on the back of the dust cover.

Turning to the next two-page spread, we see the people now singing, dancing, and shouting “Juneteenth,” celebrating the end of slavery in Texas. Scott Joplin’s introduction comes on the next page, as a young boy dancing with his mother. The text reads,

Scott, the son of a man
who had been enslaved,
would someday make America dance.

The following pages show the young Scott making music with his parents and siblings, playing the piano in a white family’s home where his mother worked, studying music with a teacher (Julius Weiss), and finally setting off on his life as a musician. As a young man, he’s pictured playing an upright piano in a Western saloon while, among the seated patrons, two men are playing cards. We see five cards in the hand of one player: all aces, and in that player’s back pocket we spy three more. In his opponent’s hand we can see only three cards, but they are also aces, with two more protruding from the top of one boot. This bit of humor is not something that most young children would grasp, but adult readers would appreciate the joke, which points to another feature of the book: whereas it’s designed for the enjoyment of young children, it also has a sophistication that can delight their elders. For ragtime aficionados, he gives an occasional wink by hiding Joplin titles within his text. In describing the music being made by the Joplin family, he writes, “Music filled the air like a breeze from Alabama.”

Ragtime had been developing as a distinct musical style in the 1880s, though it remained little known outside of African American circles. Its exposure to the wider American public came with the Chicago World’s Fair, in 1893, where attendees reported on how this exuberant, new music filled the air. It was not heard within the Fair grounds, where racial policies excluded Black performers, but outside the Fair, in surrounding clubs, saloons, and dance halls. A brilliant, two-page spread shows the festive Fair grounds, with Joplin as a tiny figure in the lower left corner, holding his valise and marveling at the sight. The text’s description amplifies his experience:

In 1893, Scott Joplin arrived in Chicago,
where the World’s Fair was in full swing.
He was dazzled by the electric lights
and the world’s first Ferris wheel,
But most of all there was the MUSIC.

The following pages depict the explosion of RAGTIME, along with graceful dancers. Then comes a picture of Joplin with the music going around in his head, with the circle surrounding his head echoing the Ferris wheel. The last few pages show Joplin publishing his “Maple Leaf Rag” and other pieces and becoming a renown composer, the King of Ragtime Writers.

While racism was inescapably a major factor in Joplin’s life and career, presenting this facet of his biography to young children can be problematic. The author/illustrator does not dwell on that aspect, but neither does he hide it. His references to Joplin’s father having been enslaved, to Juneteenth, to racial segregation, and to the exclusion of Black performers from the World’s Fair might be passed without comment, but they also present opportunities for a youngster to inquire about the situations, or for an adult to point them out. The book allows for many possible responses without pointing in any particular direction.

Stephen Costanza has produced a book that succeeds on several levels. It should delight young children while, at the same time, provoke chuckles and admiration from adults. It is a book to treasure.