Man Out of Time by Reginald Robinson 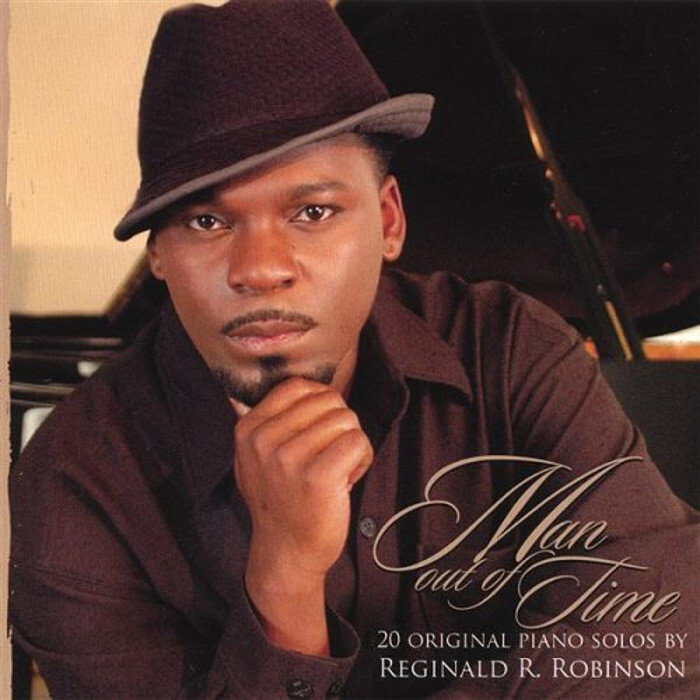 Subtitled “20 Original Piano Solos by Reginald R. Robinson,” this self-produced compact disc is an eclectic mix of rags, tangos, waltzes, a blues, a march and some pieces that defy easy descriptions.  Robinson burst upon the ragtime scene a few years ago with a bevy of original compositions and a rags-to-respectability story that warmed the heart.  Today, with four CDs and many festival appearances under his belt, he is a seasoned performer and has established a voice to call his own.

Man Out of Time, Mose, The Pride of Queen City, Lightning Strikes Twice, The Amethyst and Rosalea Two-Steps are all brisk rags, the first two being somewhat reminiscent of James Scott.  Janet and Each One As She May are slower rags with lush passages and a hint of Joplin .  So Deeply, Ansaar and Afro Latina are slow, romantic tangos, while A Ragtime Jubilee has all the earmarks of a period march.  His waltzes, Head Over Heels, Dance of The Sea Creatures and My New Life, are generally slow, often unsyncopated and show European influences.  Mr. Murphy’s Blues is a great boogie-blues which becomes very inventive within the 12-bar structure.

The remaining cuts aren’t easy to pigeonhole and might just be called “Robinson-esque.”  The Tomahawk and The 19th Galaxy are both very fast showpieces with bits of stride piano thrown in.  Don’t Turn Away is very slow and ballad-like, which only needs words to turn it into a love song.  Four Horsemen opens with a Latin rhythm before becoming frenetic and somewhat arrhythmic.

Some of this is nostalgia music that would fit neatly with the early years of ragtime.  There are, however, flashes of invention and select pieces stand out as being of a style that has come to be recognized as his own.  My favorites out of 73 minutes of music included Mose, Queen City , So Deeply, Mr. Murphy’s Blues and Each One As She May.  The sound is clean and there are no liner notes whatsoever.

There is good ragtime here and some very pleasant waltzes.  There is also exploratory work – some European, some Caribbean , some less definable.  The title may be autobiographical, for I sense Reginald Robinson is searching for where he fits musically, but we are treated to some very interesting compositions as his journey progresses and the final destination may not be as important as the journey itself.

Man Out of Time / Mose (To My Father) / The Pride of Queen City (Honoring Sedalia Trains) / Lightning Strikes Twice (for Jon Weber) / So Deeply / Ansaar / Janet (To My Mother) / head Over Heels, Over You / The Amethyst (for Trebor J. Tichenor) / A Ragtime Jubilee / Dance of The Sea Creatures / Afro Latina / Mr. Murphy’s Blues (In Memory of Leroy Murphy) / Rosalea Two-Steps (for Marnie & Chris Ware) / The Tomahawk / Each One As She May / Don’t Turn Away / Four Horsemen of The Apocalypse / My New Life / The 19th Galaxy.