By the time you hold this paper in your hand, I will have achieved the grim distinction of being exactly the same age New Yorker founder and editor Harold Ross was when he died. Ross, of course, accomplished so much more than I have in my comparable time on this planet. He edited every issue of the magazine from the first until his death—a total of 1,399 weekly issues over 26 years. I’ve edited 65 monthly issues of The Syncopated Times, though it feels like more. Measuring my meager accomplishments against those of such a titan of the blue pencil, I should be ashamed to complain.

Harold Wallace Ross, born November 6, 1892, was remarkable in every respect. Largely self-educated, and barnstorming as a reporter all across the country, Ross covered the notorious Leo Frank murder trial in Atlanta. When the recent flap over possibly discontinuing the US Armed Forces newspaper Stars and Stripes was discussed, I was chagrined not to hear any of the ostensible journalists mention how Ross, as an Army private, had been perhaps its greatest editor.

Ross was recommended by his superior, Major Mark Watson, to receive the Distinguished Service Medal, stating that his work stood out so conspicuously as to entitle him to special mention. Since the DSM was rarely awarded to personnel below the rank of colonel, Ross was passed over for the honor. 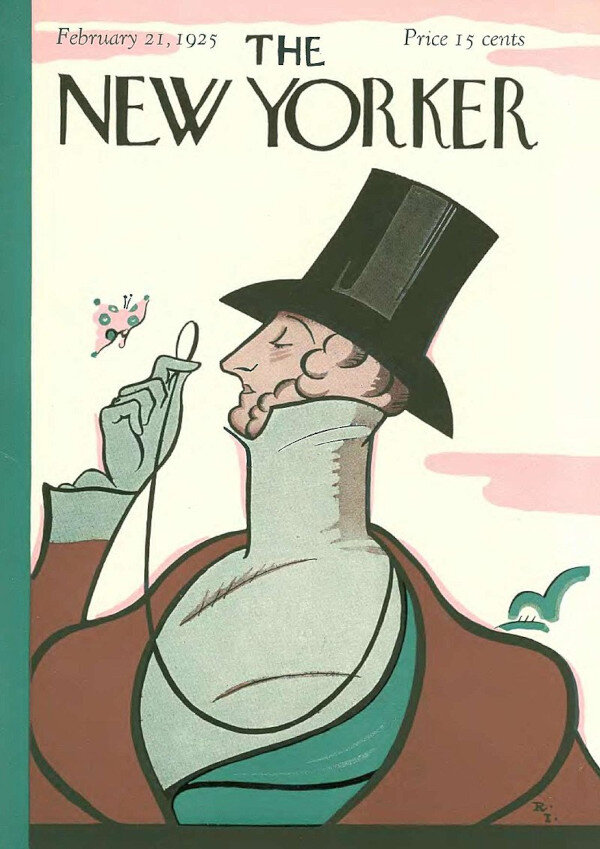 While in France, Harold Ross met other characters at Stars and Stripes, most notably Alexander Woollcott. After the war, and a few more editing jobs (including time spent at the creaky humor magazine Judge) he launched The New Yorker, with his first wife, Jane Grant, with the first issue dated February 21, 1925. And he kept at the helm until he died, on December 6, 1951, at the age of 59 years and one month.

I’ve mentioned my admiration for the Ross-era publication in previous issues. In the April 2016 paper, I was positively rhapsodic:

I do sometimes pine for the days of Harold Ross’s New Yorker, which came out once a week, full of surprise and delight, featuring the greatest writers who ever wrote in American English.

I have at hand a rather battered copy of The New Yorker for March 4, 1944. Credited writers include S.J. Perelman, Dorothy Parker, Shirley Jackson, Wolcott Gibbs, and Edmund Wilson. Presumably E.B. White and James Thurber were in the office on West 43rd St., contributing uncredited “Talk” pieces. It’s almost impossible for me to fathom all that shimmering literary brilliance in one place at the same time. What wouldn’t I give to spend half an hour chatting with any of those giants?

In my December 2017 column, I recounted a conversation I had with Joe Bebco, soon to be Associate Editor, regarding the appearance of profanity in venerable periodicals:

“People are used to seeing these words online,” he said, “but when one is on the printed page, it’s a permanent, physical thing.” He then mentioned how, as a reader of The New Yorker, he was astonished by the level of profanity he now encountered there. “It’s like listening to a librarian swear,” he said.

I couldn’t help but think of that brilliant roughneck, Harold Ross, who created The New Yorker as a genteel and sophisticated alternative to the rowdy humor magazines of the 1920s. Ross, and his long-term successor, William Shawn, kept the language within the publication clean. It wasn’t just a matter of appeasing the Postal authorities, who were still observing Anthony Comstock’s standards. There was a certain elegance in expressing ideas without recourse to the vocabulary of the barracks or the locker room.

The astute (or even semi-conscious) reader may begin to detect a leitmotif here. I admire and somewhat identify with Ross, though having read his biography Genius in Disguise: Harold Ross of the New Yorker by Thomas Kunkel, Thurber’s The Years with Ross, and of course Brendan Gill’s Here at The New Yorker, I’m not inclined to adopt him as a personal role model. I have my own frailties and foibles, ones that are more tailored to my individual needs. It only remains for some intrepid sleuth to unearth those babies so future generations may recoil at them.

Nonetheless, I take this mile-marker quite personally. I’ve been watching the clock my whole life (and not just in the sense of “Geez, it’s getting late and my deadline is in five hours”). My health has been compromised for decades, and in pandemic terms I can boast what amounts to a Whitman’s Sampler of comorbidities. Aside from indulging in my major pastime of Staying Indoors, I’ve beguiled the hours by watching myself outlive people I admire. In that regard, I am a horse that no one would have bet on. Even my father would have laughed at those odds.

The ticking of that clock gets louder with each milestone. As admirable as it is to drop dead at one’s desk in the service of—something, I decided a while ago that it isn’t my career goal. I recently talked with a life-long friend of mine and said, “I am the busiest lazy person you know.” (Or it might have been “laziest busy person.”) My objective as a lazy person has always been to do as little work as possible—and I picked a hell of an occupation (“obligation,” my Inner Freudian just typed) in which to do it.

Someday, someone else will be doing this job—and if fate is kind, I will have the privilege of cheering or heckling that poor fish from the sidelines. Harold Ross never got the chance.