“I’m going to miss this epidemic,” more than a few jocular Facebook and Instagram visitors are sentimentally waxing about the eventual end to the miraculous, yearlong, nightly, live-streaming broadcasts of Meredith Axelrod and Craig Ventresco.

Nightly for the last year—yes, every night, for 365 days straight (save for one night in 2020 in deference to Black Lives Matter, ever since March 17, 2020) they’ve played 45-minute sets without break—ending each with the admonition, “Don’t touch your face!”

Fortunately, early into the shut-down, I came upon this San Francisco-based duo’s incendiary concerts of rarely-played, early American, popular “vernacular music” (mostly written between 1870 and 1930) played on dual guitars- primarily ragtime, vaudeville novelty songs, early jazz, blues, western, and early folk songs. Broadcasting from their humble kitchen, they play with verve  in the styles of the original period recordings upon which they’ve built their career and an encyclopedic repertory. Alternately they supplement their string playing and vocals with what seems like an endless combination of instruments: four, six, and 12-string guitars, uke, mandolin, banjo, cello, glockenspiel, jug, nose-whistle, autoharp, and Meredith’s own brand of voice-trumpet and yodeling. 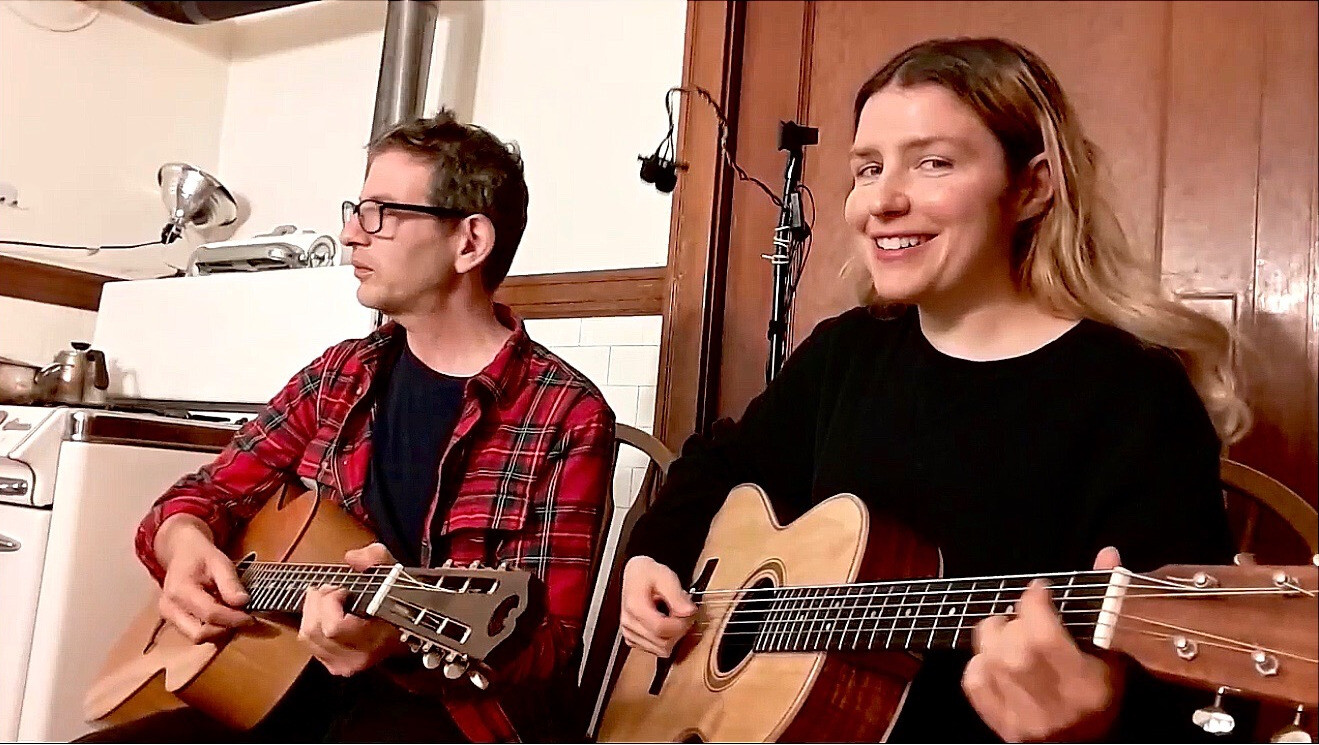 There has been no shortage of excellent music being made by innovative, driven musicians online during this crushing shutdown and it is being disseminated in a lot of new imaginative formats. However, compared to Craig’s and Meredith’s nightly live-streams, few other broadcasts seem as natural and ideally made for social media; few are so authentic, homey, charming, surprising, comforting and spontaneous -not to mention amusing, and idiosyncratic.

I became hooked during my first online visit early last March; quickly becoming a regular (among many regulars) at their virtual kitchen table. I was pleased and more than surprised to discover that even familiar “Standards” that Meredith occasionally sang included opening verses and stanzas I’d never heard—trust me, I know a good many rare verses. But even more to my delight and more frequently they perform a great many songs I’ve never heard—eliciting from their savvy, vociferous FB fans (a number of whom are musicians) comments typically along the lines of……. “Where the heck do they find these tunes?”

The answer is that they have been, for years (Craig since age six) avid 78 RPM record collectors. Craig estimates that their collection contains about 4,200 records and wax cylinders—many of which (but not all) have two sides. To call their repertoire vast (especially considering their relatively youthful ages) is not an overstatement. For the first three or four months of their nightly sets, they didn’t repeat songs. Do the math: that alone is roughly 75 hours of music without a repeat!

Then there’s the matter of their playing: calling Craig a “firebrand guitarist” is also an understatement. It’s not just about his speed but his wild weaving of combined melodies, ornaments, runs, and harmonies (of a natural and traditional nature but assembled like a magnificent masterful stew) that send many of the listeners to Facebook’s comment section with fire and explosive emoticons and an endless stream of bubbling hearts. Listeners are constantly marveling at his fluid use of the entire range of the fret-board on any of the several string instruments he plays; they try to fathom his unconventional hand positions and his own mysterious picking techniques that are the endless wonder of many of the viewing guitar and uke aficionado.

About his technique, he says, “I’ve been told that my right hand technique is unique but I’m inclined to believe that there is nothing new under the sun. I don’t spend two seconds worrying about my right hand, because I’m always so concerned about my left hand! I figure the right hand will play whatever the left hand wants it to.”

While not trying to emulate any particular artist, and largely self-taught (he had some lessons as a kid and a handful of classical lessons years later), Craig says he takes his guitar playing cues from the likes of Lightnin’ Hopkins and Blind Lemon Jefferson; he take some harmonic sensibilities from barbershop quartets likes of The Haydn, The American, and Peerless quartettes and some melodic and comic sensibilities from Gilbert &. Sullivan. While he feels his tastes are too varied to pigeonhole, he added that Big Bill Broonzy’s “Pig Meat Strut” could be said to epitomize a favored guitarist and song. Elaborating on his preferences he also said he has a fondness for songs like “Rose Of Washington Square,” “I Know That You Know,” and “When Reuben Comes To Town.” [My own favorites of his include: “Pony Boy,” “Mariah,” “Don’t Take Me Home,” and “Georgia Camp Meeting.”] As for his ragtime education, he says, “I learned most about ragtime from old piano rolls and 78s but not from any specific performer.”

Meanwhile, Meredith is alternately the lead singer, the specialty soloist, rhythm bassist, and a mindreading accompanist (having worked closely with Craig since about 2004, including steady, twice-weekly gigs around the Bay area, before COVID). Largely self-taught, Meredith’s bass solos (particularly on guitar but also occasionally on cello) regularly garner joyful outbursts from their loyal international assembly of viewers, as do her novel solos on glockenspiel, jug, voice-trumpet, and sundry assorted instruments. Jointly they play seamlessly, creatively, and are beautifully deferential about passing back and forth instrumental melody and harmony lines.

The couple have a fondness for ludicrous story telling comedic novelty songs performed by vaudevillians the likes of Billy Murray, Arthur Collins, Eddy Morton, and Clarice Vance and novelty tunes like “I Want To Go To Morrow,” “Clancy’s Wooden Wedding,” and “Show That Fellow the Door,” as well as lyrical tongue-twisters that leave everyone marveling, not only how they are able to sing the songs clearly, but how they are able to remember all the words (well, nearly all the words; a bit of slippage is natural; it’s authentic; it’s even fun and always forgivable given the voluminous material they cover).

Meredith, without extensive formal vocal training (only some very briefly while in her 20s), beamingly delivers lyrics and nearly everything she sings, meaningfully with expression and lots of character (most often affectionately and humorously); she articulates clearly (but naturally), has stellar intonation, sings without vibrato and yodels in a bright, ringing, clarion voice. She says she learns songs by osmosis—listening over and over to original 78 RPM recordings, only occasionally referring to original sheet music to parse tricky lyrics that can be particularly difficult to decipher on old records.

As informal and relaxed as the show appears to be, it requires dogged preparation: “It’s my responsibility to come up with half the selections” (Meredith is responsible for the other half). “Sometimes I know exactly what I want to play and I don’t need preparation,” however, he’s quick to add, “sometimes I want to learn a new piece and I put many hours in. We treat it like it’s our job…which it is!” The lyrics, he says, of ninety-eight percent of the songs, he memorized over years of playing them, but for a few (rarely and hesitantly) he uses cue-sheet showing only the initial word of a verse….”just to keep from possibly going blank.” Prior to airtime, his numerous stringed instruments have to be tuned, (“one at standard pitch, another three whole steps down and one, primarily for chordal accompaniment”) facilitating quick changes and guitar swapping with Meredith, as needed throughout the broadcast.

Although he says he’s gotten slightly more comfortable “streaming,” surprisingly, as seasoned as Craig is, he confesses that it gives him stage-fright, although actual live audiences don’t make him nervous; adding that he even needs to seriously unwind after the broadcasts because of nerves. Meredith describes the practical rigors of daily preparation as a challenge that is like living “almost a monastic life.” For their efforts, however, they’ve certainly proven to be pros about starting each show promptly at 8 pm (Pacific), in-tune, and playing fresh sets nightly that roll-along spontaneously, casually and cheerfully.

Their music making is positively the main attraction, but what also makes their live-stream a standout to me (and I believe their audience) has something to do with the vibe of their show. It’s similar to the feel of the early, adventurous days of experimental live-TV of the 1950s (before laugh tracks). It’s not slick; it’s homemade, and endearingly, it’s even a tiny bit shabby. With a little applied imagination, they might be favorably compared to Lucy and Desi, or Burns and Allen (but without any of those teams’ sarcasm). They can be quite loopy (and who isn’t these days—and who wouldn’t be after a year of this) and sometimes their banter borders on a mix of Kafka and Professor Irwin Corey when they aren’t otherwise respectfully acknowledging viewer requests and seriously crediting composers and lyricists. 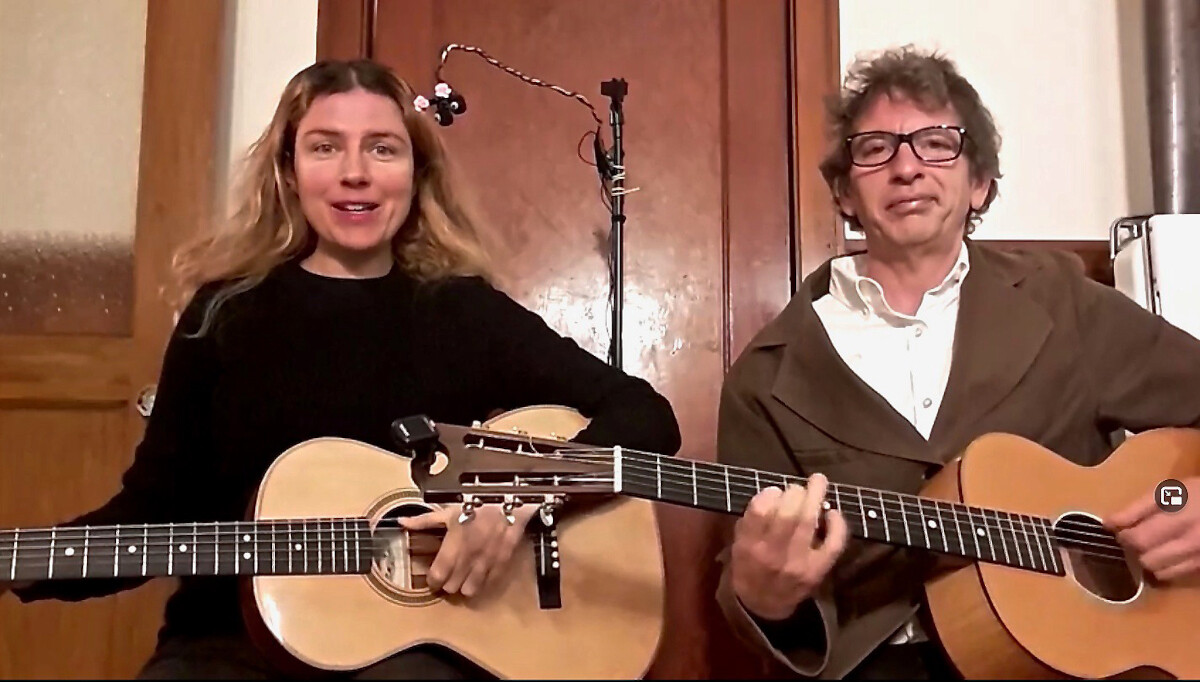 Loopy as they can occasionally be, they come across as authentic and almost intimate. Perhaps that’s accentuated because they sit in their kitchen, close to the camera (in order for us to see their fret board techniques); they essentially fill the video frame; their performances are truly “up close and personal.” Evident in their deferential treatment of each other (verbally and musically) is a respect, appreciation, and support of each other, sprinkled-in with a shared sense of humor and an appreciation (even affection) for their audience. [Loads of affection!] Their personal interplay is downright inspirational; it’s an exemplary way of being—especially in these irritating, intolerant times.

Meredith says that the reward of the live-stream for her (beyond making it possible to pay the rent) is knowing that they’re sharing the same wavelength with their audience; that the feelings created by the music are shared in real time with friends and fans. In fact, there are ample examples of community from the live, online comments. Unlike most other broadcasts, their audience’s remarks are an active part of the evening, filled with familial banter, and faux cultish jokes (the kitchen and their cockamamie microphone have become genre of jokes unto themselves and the mystery of what’s inside the green pot on the stove is a sub-genre…. spoiler alert: spaghetti sauce). Among viewers there are expressed concerns for the health of fellow viewers, there’s music-history and guitar-geek commentary, but overwhelmingly there are active, in-the-moment, visceral responses to what’s being played and sung and how it’s being played, and sung.

Meredith say that the surprising thing about their yearlong unintended undertaking has been how genuinely nice and supportive the viewers have been. Beyond online tips, beyond words of praise, heartfelt appreciation and gifts (including water bottles, a Chicken kitchen clock, and a beautifully resonant restored mandolin) what has most surprised her is that “a community has come together around the program”—which to some extent, beyond the urgent economics, has been the goal of their music making.

I share the sentiment. In this regard I too will miss the epidemic when it’s all over and when live music in physical venues resumes and that great time when we can once again touch our faces.

My thanks to Susan Brentnall for the extra push to write this article and for the friendly, savvy community of characters on C&M’s nightly stream.