“Jeff, I’ve got a gig for you this Labor Day,” whined my friend Stu Ingersoll in his ponderous yet always welcome voice.

Stu had a gig on his 1906 oyster boat, Flora, in the middle of Long Island Sound hosting members of one of the most prestigious yacht clubs on Long Island. We’d anchor at 4 pm and the guests would arrive in their boats between 4:30 and 5. The early arrivals would tie up to Flora, with subsequent guests tying up to them and so on, creating a spreading flotilla with our boat as the “Mother Ship.” The visitors would clamber across the yachts between them and us until they reached Flora’s deck, where Stu on tuba, our mutual friend Art Doran on banjo and I would be waiting to regale them with tunes of yore while they ate and drank supplies of expensively catered goodies. It sounded like a marvelous adventure, AND our trio would also partake of the gustatory delights!

“If we set sail from the Boat Works around 10 am, we should be there in good time. Wear the usual.” The “usual” was vintage New England summer garb: khaki trousers, light blue Oxford shirt, suspenders (no clips: real braces with buttons on the outside of the pants), a patterned red tie and a boater hat—sennit straw, please; no plastic or Styrofoam knockoffs!

I drove into Stu’s boatyard at the appointed hour and he, Art, and I boarded Flora to begin our slooww journey through the Essex Shoal Channel, down the Connecticut River, into the North Atlantic Ocean and finally crossing into Long Island Sound. Flora’s maximum speed was eight knots, so we had plenty of time to take in the sights on this gloriously sunny, late summer day. Vacationers out on their motor and sailboats large and small floated by, marveling at Stu’s magnificent craft, lobbing comments ranging from “What a work of art!” to “How do you keep that tub afloat?” Stories (and of course beer) flowed freely as we continued our voyage south to the rendezvous point and, as was always the case when I was onboard Flora, the time passed too quickly.

We anchored at the appointed coordinates and awaited our first visitors. As we kept vigil, I looked in every direction to see nothing but calm sea. My wife Anne and I have performed on many cruise ships, and those leviathan floating cities somewhat distance you from the endless water below. Although Flora’s 50 tons spread over 60 feet (so, she was no dinghy) I felt a buzz being unable to see land…OK, the beer contributed to the buzz as well.

Around 4:45, we spied the first cruiser motoring toward us. It was a decent-sized craft, around 39-40 feet, and looked VERRYYY expensive. Over the next 30 minutes, dozens of almost identical boats appeared. While we were surprised at the nautical homogeneity, this did nothing to prepare us for what we subsequently encountered. Stu was in the wheelhouse sorting details and Art and I exchanged a glance, held our tongues, and proceeded to witness the arrival of our guests.

The sailors approaching Flora across the decks of each other’s boats all made Thurston and Lovie Howell look like insolvent beggars. Each woman was dressed in an outfit that would have purchased our entire boat, let alone the instruments there-on. The late afternoon sun gleamed off the jewels adorning these ladies, no doubt sending a special Morse code to the land several miles away: “Wish you were here; Can you believe what Muffy is wearing?; The dress on Mrs. Throckmorton looks as if it’s still on the hanger!” I sat hunched behind the piano bolted to the deck, accompanying Art as he strummed his banjo and bellowed “Who’s Sorry Now?” at the indifferent bevy of pulchritudinous patricians, afraid of having my ear removed by one of the multi-carat rocks on their fingers. These people did not frequent the bars and saloons in which I pounded away along the CT shoreline!

The men were even more Stepfordian. Each wore a nearly identical ensemble comprised of blue double-breasted jacket, white linen trousers, white-and-blue-striped Brooks Bros. shirt, red ascot (the few mere millionaires amongst them sporting red ties from Milan), Gucci loafers—sans socks…it was the final day for white pants and the showing of ankles without being gauche, dahling—and, to a man, a jaunty Captain’s skipper hat, complete with gold embroidery across the front and on the visor. Their jaws jutted out so far that a sudden summer rainstorm would have seen us bailing their lower lips out with shot-glasses lest they drown. They all had names ending in Roman numerals—Ernest Portnoy II; Robin Flintloo IV; Thaddeus Aidweph VI; Garmold Mumbly IX; and, most impressively, Quigley Ulbrecht Vandersnoot MDCCCXCIX, whose ancestor, QUV I, had amassed his fortune making fish hooks out of animal bone. 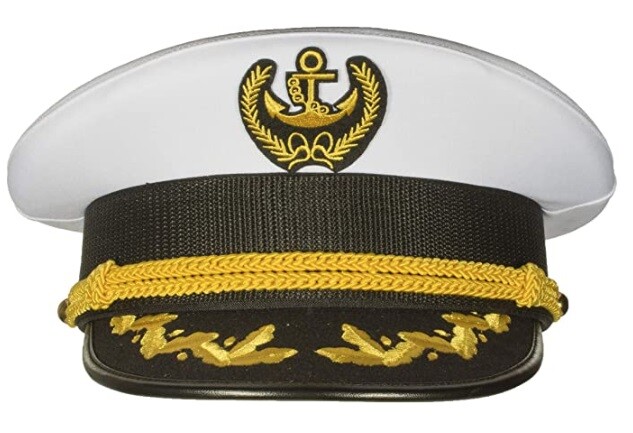 These aristocrats had ferried across the Sound to slum it on Stu’s oyster boat and boy, did they have a time! Bottles of $300 champagne; platters of rare albino lobster; a shed-full of shad roe; acres of Almas caviar; three cases of Coors (WAIT, who brought those on here??) and more noshes for nobility than one could swing at with a narwhal cane: all were in endless supply as the day turned to dusk and our trio jazzed up Depression-era ditties including “Jadeites From Heaven,” “The Best Things in Life Are Mine” and “Brother, Can You Spare a Daimler?”

The engagement was set to wrap-up at 7:00 pm. That time came and went, and the revelers remained. Art was getting antsy, and Stu was getting stewed (somebody had to drink the Coors). I was getting bored. I nudged Art, who piped up, “Hey Stu, this gig should have ended an hour ago; we’ve still got to get home!”

“I tried to shoo them off the boat, but nobody is ready to leave. The guy who is paying us isn’t even here; he’s back at the club! We’re stuck here until they stagger back to their own boats…”

Neither Art nor I were impressed with Stu’s defeatist attitude.

“I’ll take you down into the hold to show you the engine and how it starts. I’m sure you snappy seafarers will appreciate superior craftsmanship!”

As they bobbed and weaved across the deck, beckoning all to accompany them down into the hold, Artie winked at me, “We’ll be setting sail in no time.”

Flora had a piston-engine which made a comforting “pockita-pockita” sound when running. Stu would start it by lighting a match to a wick. Ten seconds later the rope would burn down, and the engine would ignite.

“Ten, nine, eight…” Art counted. As he reached “one,” KA-PHWOOM, a huge belch rocked the boat from below and an immense column of black, oily smoke burst forth from the hatch, immediately followed by sputtering skippers covered from hat to loafers in black soot. Never had rats so quickly left a ship; everyone sprinted back to their respective “yachts” and within three minutes we were alone on the high seas. Except for the soundtrack of coughing and retching, the tableau resembled a sped-up silent film.

“Oh dear,” Stu sighed. “Do you think we should forget about a tip?”

By now, it was 8 pm and dark. I was elected to steer Flora home. Although the most sozzled of our trio (Art hadn’t taken a sip since the 1970s, so Stu and I always divided his share), I was also the youngest by 35 years. I was nervous, as I had no idea where we were or how to get back to where we needed to be.

“Don’t worry, Jeff,” Stu soothed, “The compass will take you home. Keep it set to 332o WNW and wake us in about four hours.” He then went into his berth at the back of the wheelhouse and shut the door. There were no additional berths, so Art took the first-mate’s chair and was instantly snoring while I piloted.

There I stood, feet firm, legs wide, knees knocking as we “pockita-pockita”-ed across the water at our full eight-knot speed. Muttering under my breath, “Keep the boat at 332o, keep the boat at 332o,” I gradually calmed down and even began to enjoy the voyage.

He came to my side, a regular Smee.

“What is that ahead of us?”