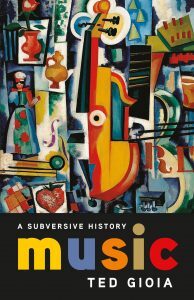 Author Ted Gioia may be known to readers of Syncopated Times through his writing about jazz, which includes many articles and the books: The History of Jazz, How To Listen To Jazz, The Birth and Death of The Cool, The Imperfect Art, West Coast Jazz and Jazz Standards. Gioia has also written about blues, work songs and love songs. I’ve read much of this material and have found it incisive, well researched and written.

Music: A Subversive History, however, is a step beyond anything Gioia has written. His last book Love Songs: The Hidden History also had a central thesis which he used as a means of investigating the history of music. Gioia takes a similar approach in this book, but here his aim is even higher and his investigations run wider and deeper. He pulls the curtain back on the formulaic history that we have all been taught and shows us that innovations in music can be explained in a new way.

While most musicologists have been willing to try and build on or to simply repeat common, top-down perspectives, Gioia demonstrates that music history-like all of history-has been written by the powerful. The truth told in this book is that the creative impulses that have driven musical creativity for centuries arose from beneath, from society’s marginalized-slaves, outsiders, outcasts, women.

Gioia takes us back to the earliest cave dwellers, who used music as a community ritual, to help with the hunt or the harvest. He points out that research done in the caves at Lascaux, France shows that the famous cave paintings therein were purposefully placed at the most acoustically propitious places in the cave; well-situated to amplify the singing or chanting accompanying the hunting rituals that involved the animals represented on the cave walls.

When that period of group/tribal participatory ritual ceased, a new cycle started that continues to repeat itself through the centuries: music arises from the underclass or from women — Sapphic poetic singing in Greece, the Shijing songs in China, slave songs in Andalusia, advancements in harmony in the Middle Ages, blues and jazz in the U.S. — and takes hold in the culture. At that point in the cycle, the power elite-secular or church-is threatened by the energy unleashed and either tries to suppress it, repress it or co-opt it; sometimes all three.

There is so much rich history in this book; so many interesting and startling facts and stories that I found myself making three times the usual number of notes that I would when reading a book for review. How many of us knew that in ancient Greece, some instruments & gigs were so low class that slaves were imported to play them? How many of us have considered the fact that advances in horn-instrument making derived from the need to have different kinds of sounds for different activities: hunting, fighting, boxing, punishing slaves.

Yes, these are all violent activities and, in fact, the history of music can also be seen as a tension between the love-making, war-making and religious potentials of music. Gioia mentions several examples of songs that initially had a more “carnal” meaning, that were then co-opted into material suitable for religious or state purposes: Sappho’s work and the Greeks, the Gita Govinda and Hinduism, the Song of Songs and Christianity and the Shijing and Confucianism. He mentions that the largest artistic expenditure this country makes on art is what it spends supporting military bands. The fact that women often explored the more mysterious, magical, ineffable side of music was one important reason for the historical suppression of their contribution. 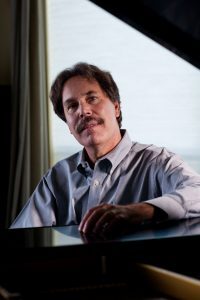 Readers of Syncopated Times probably are most invested in 20th century perspectives on music. Gioia reaches back to the 19th century, into the roots of minstrelsy, the songs of Stephen Foster, the growth of spirituals, ragtime, the blues and jazz, to explain how American music was beholden to music created by slaves. He talks about the uneasy relationship between blacks and whites in the subtle-and unsubtle-ways that racism affected our adoption of these innovations. At the turn of the 20th century, songs could be risqué, but the cover art for the sheet music had to feature “negroes,” not whites. In some ways, this cultural ambiguity and double-standard is still with us.

In an interview with Gioia I explore some of these ideas in greater detail, but I’ll conclude this review by recommending this book wholeheartedly to anyone with the curiosity to understand how and why music has evolved the way it has and who wishes to gain insights into the intertwining of violence and spirituality that music has brought and will continue to bring, into our lives.

Read: An interview with Ted Gioia on Music: A Subversive History