Recently, I moved into a co-op apartment building in Manhattan. If you’re not aware, the concept of a co-op is that each resident owns shares in the building rather than each actual apartment, which (in theory) gives a nice sense of community and personal responsibility to your home.

(Side note: no-one is above the co-op rules. Madonna herself got the boot from her fancy co-op on NY’s Upper West side for violating the building’s rules. Whoah!!)

Anyway, the process of applying for my apartment involved an interview with the building’s co-op board: residents of my building whose job it is to weed out the weirdos. So it goes without saying that I was on my best behavior. (I even ironed my shirt.) I don’t think it’s an exaggeration to say that I charmed the hell out of them, and all was going well, until I was asked the inevitable: what do you do for a living? (Hmm… do I lie? Computer programmer is vague—and quiet enough) but eventually I settled on the ugly truth: musician. And not even one of those cool musicians who wears a beanie and makes dope beats on his laptop; but jazz musician. 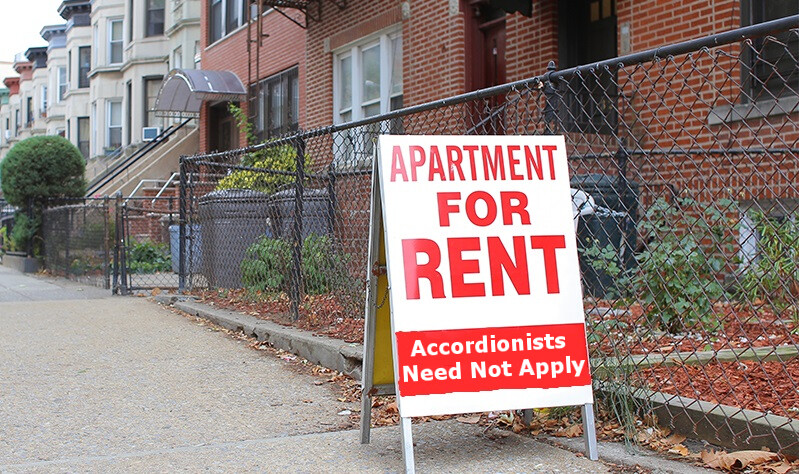 Now, I can understand anyone’s reluctance to live next to me. We probably don’t have the best reputation, and perhaps rightfully so. And of course, this led to the inevitable “We like you; but we’re worried about the noise. You’re not going to play your instruments, are you? Can’t you go into the park to practice?”

My charming demeanor held its ground. “I understand your concerns, but it’s my job. I have to practice every day. I will be respectful and keep respectful hours, close all windows, and soundproof as best I can to minimize noise.”

Other than that, the interview went well, from what I could tell. But sure enough, the next day, I received an email:

We think you’d be a good fit for us, but we are concerned about the noise disrupting our building. So we have an odd request..

The request? That I bring my saxophone to the empty apartment, and play my saxophone for them, while they stood on the other side of the closed door and checked the volume level. (Yes, this really happened.)

Of all the auditions I’ve had over the years, this one was the weirdest. (Only in NY.)

However, I did like the place. So I turned up with my horn, closed myself into the apartment, chose my best mezzo-piano volume and played the prettiest and most inoffensive Girl From Ipanema that anyone has ever heard. (Elevators around the world were weeping with envy.)

When I finished, I opened the door, with the co-op board approving of my song choice, volume level, and granting me approval to live there.

So this story does have a happy ending, and in the few years I’ve been there, have had zero complaints (touch wood).

But of course, in cities like NYC where apartment living is the norm, many musicians are not as fortunate as I, with a lot of cats dealing with neighbors banging walls and leaving notes in protest.

So far be it from me to leave my colleagues behind. Have no fear—I’m here to help with the Professor’s guide to dealing with crabby neighbors:

1: Buy a chihuahua. Those little buggers never stop barking that specific frequency that makes you want to strangle them. So your neighbors will be so pissed at your dog’s yapping they won’t even notice your instrument noise.

2: Set off the fire alarm. Not the most effective method, but you’ll get a good half hour practice in, until the fire trucks depart.

3: Drug your neighbor. I know this sounds immature, but so is playing music for a living. And relax, you’re drugging them, not poisoning them (we’re not animals!)… it’s just a light sedative to send them sleepytown while you work on your hot licks (it’s for their own good after all). So, knock on your neighbor’s door, and ask to borrow the sugar. Before you return it, crush up a sleeping pill and mix it in. When you hear their kettle boiling, wait one hour, then get out your horn and enjoy a few hours of peaceful practice bliss.

I hope this helps solve your neighbor issues! And no matter how much grief you get from them, remember it could always be worse… you could be Madonna.