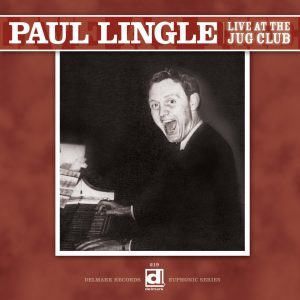 Paul Lingle spent most of his life playing for people who didn’t really listen.  From the bars and dime-a-dance joints to the Dixieland band one-nighters and the cruise ships to the Orient, he eked out a living in the San Francisco bay area wherever he could, ultimately developing a style that could be heard above the patrons’ background chatter.

But a few people did listen, and one of them had a tape recorder.  The resulting tape wound up in the hands of Paul Affeldt, producer of Euphonic Records, and subsequently into the vaults of Delmark Records, who bought the Euphonic catalog and is slowly re-issuing the contents on compact discs.

This isn’t parlor ragtime.  Lingle had an infectious, swinging, stomping style that was strongly visceral, with muscular right-handed melodies against a heavy left-hand beat – always that great, driving beat.  He was a supremely talented musician, a legendary – almost shadowy – figure who shied away from recording opportunities, thus leaving us few examples of his considerable skills.

Lingle’s approach to this music was always more ragtime-ish than jazzy.  He had a great sense of syncopation and even the selections that are usually associated with traditional jazz sound like ragtime under his fingers, the one exception being September In The Rain, rendered in an a-rhythmic cocktail style (probably to satisfy a well-lubricated patron who thought nothing of interrupting the recording session to request a tune).  The two Lingle originals are worth noting: Black & Blue Rag features rather simple melodies with much left hand interest, while Dance Of The Witch Hazels is fast, catchy and devilishly difficult.

This music was recorded in 1951 under less than desirable conditions, which makes the results all the more amazing.  Liner notes by Bob Helm give us a good glimpse into Lingle’s life.  It’s almost sad to hear all of the background chatter.  Those poor souls didn’t truly understand what they were missing.  If I had been in the Jug Club that night, conversation on my part would have been impossible.  I would have been a worthless companion, hanging instead onto every note Paul Lingle played.  Volume two will be released soon, and I plan to be at the head of the waiting line.

Good Gravy Rag / Black Bottom Stomp / 2:19 Blues / Strut Miss Lizzie / Blame It On The Blues / I Wish I Could Shimmy Like My Sister Kate / Tin Roof Blues / Louisiana Rag / Ostrich Walk / Pastime Rag #3 / Shim-Me-Sha-Wabble / Tia Juana / Ace In The Hole / Squeeze Me / Black & Blue Rag / September In The Rain / Dance Of The Witch Hazels / I Ain’t Gonna Give Nobody None O’ This Jelly Roll / New Orleans Joys / Down Home Rag.