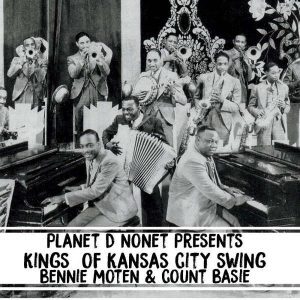 The Planet D Nonet is a swing band from Detroit founded by drummer RJ Spangler and trumpeter James O’Donnell. They maintain a pretty heavy gig schedule around the Michigan hotspots and have released a dozen albums and a 45 in the last decade. Their albums are comprehensive explorations featuring original transcriptions, new arrangements, and a themed focus. Some seek out bluesier numbers, two have focused on the music of Sun Ra.

Every spring they produce a concert honoring a jazz legend. Past concerts have shined the spotlight on Duke Ellington at the Cotton Club, Fletcher Henderson, and Billy Strayhorn. The 2017 concert started with a focus on Kansas City Jazz more broadly but honed in on the 20s Bennie Moten band with Count Basie as a member. Before that change of focus, several songs from the repertoire of Julia Lee were assigned to singer Camille Price and those were left in the final concert. They provide an enjoyable change of pace from an otherwise largely instrumental set, with male vocals appearing on a few numbers.

Before I go any further I need to talk about what really makes this album stand out. The album is delivered in a beautifully designed CD case, and instead of liner notes a 34 page 6″ by 6″ booklet weaving through the history of Kansas City Swing and the Moten Band. No downloads here.

A huge amount of preparation went into the booklet and into the concert that is served up on the CD.

Greg Milewski transcribed Moten/Basie classics including “South”, “Jones Law Blues”, and “Rumba Negro”. Others contribute transcriptions of “Moten Swing, “Time Out”, and “Prince of Wails”. The band also delivers tight versions of “Good Morning Blues”, “there’s a Squabblin'”, and “Bouncing Around.” From Julia Lee, we hear “Sweet Lotus Blossom”, and “If It’s Good.”

The musicians spent months in preparation for the concert. The pianist Michael Zaporski rises to the task of channeling Moten and Basie, and the rest of the band lives up to performing the tracks chronologically with a corresponding development of style through the album. (The Julia Lee songs are inserted where the set most needs them.)

Overall it is an excellent concert worthy of  Kansas City’s golden age, and the Motor City’s for that matter. Detroit is blessed to have a group of musicians preparing musical gala’s on this level. They recreate the music brilliantly but bring their own fire to it. In his autobiography, Good Morning Blues, Count Basie recounts an incident where he arrived late for a show in Japan and thought his band had started without him. It turned out the Japanese group opening the show was just that good at mimicking the Basie sound. This album also reaches that highest form of flattery. Fans of Moten and Basie should flock to it.

Buy the album at planetdnonet.bandcamp.com