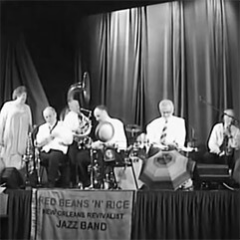 As I have often said, the U.K. has been blessed with many traditional jazz bands since the revival of the late 1940’s, and the Red Beans ‘n’ Rice band is another of them. The group hails from Norfolk and was founded in 1992.

Like so many of the U.K. bands, Red Beans ‘n’ Rice favors the New Orleans style, meaning much emphasis on ensemble work. Syncopation is another mark, and it is particularly evident when Jim Finch is on drums. He has obviously listened to the New Orleans marching bands and successfully incorporates the street beat, especially the bass drum syncopation, in the tracks on which he appears.

In addition, Robin Burgess’ sousaphone playing is not “leaden’” two-beat, and that, coupled with Norman Munroe’s and John Bright’s steady four-beat banjo chording and the drummers’ eschewing the backbeat, means the band does not become ponderous, as so many with the brass-banjo-drums rhythm do, the brass bass laying down a heavy beat on one and three and the banjo an equally heavy two and four in each bar and drums a weighty afterbeat. No, here it has the feel of a four-beat rhythm.

The front line and almost a third of the rhythm section remained constant throughout these three years of the band’s existence, and much of the band’s consistency is no doubt attributable to this fact. But some of that accord must be attributed to the leader as well, Robin Burgess. Regardless of personnel, he directs the group into achieving the same sound over both discs.

While most of the tunes will be familiar, their treatment by the band keeps them interesting. On most of them the ensemble work is prominent, and it is a joy to appreciate how the band members complement each other. The switching of the lead, the solos, and the counterpoint by the other horns —all prevent the “same old, same old” response from the listener to what is so often, with other bands, a repetitious pattern.

In addition, the arrangement can contribute significantly to how a tune’s “meaning” may be communicated. A nice illustration of this is found in “Just a Closer Walk with Thee.” It opens with a muffled drums intro, then the ensemble picks it up at a slow dirge tempo for several choruses. After these, the snares are thrown back on and following a roll-off, the tune is taken at a spirited march tempo, the lead being traded among the front liners, the others playing counterpoint in turn. Following the coda where the cornet leads, the tune ends with an 8-bar snare drum closer, echoing the intro. There is nice drum work throughout—judicious bass drum accents as well as the snare work. The whole arrangement suggests the jazz funeral in New Orleans where the band leads the mourners to the cemetery with a slow dirge, then after the body is cut loose takes up a sprightly march to lead the second liners out of the cemetery.

The choice of tempos also enhances the performances. As we might expect, the blues are usually taken at a slow tempo, but on occasion the band departs from what is often considered de rigueur for blues, “Perdido Street [Blues],” for instance, being taken at a fairly brisk tempo. Other tunes most often taken at a sedate pace are given a bit of a fillip here, such as “When My Dreamboat Comes Home.” Conversely, the odd tune is taken at an unusually slow tempo, such as “Algiers Strut,” which is very relaxed.

Once or twice the tempo tends to get a little away from the band, as it does in “You Tell Me Your Dream,” “Bogalusa Strut,” and “Say Si Si,” but these are minor aberrations. Another slight flaw is the impaired sound quality in “Bogalusa Strut,” which is rather strange as several others tracks were recorded in the same place at the same time. Yet there is a noticeable acoustic variation here—the band seems to be a tad distant. Although the expression is still clear, the rhythm is a bit muffled. Since the tunes were all recorded on a cassette back in the day, such blemishes are to be expected These are all slight defects and few in number, however, so that they do not materially interfere with the music—or one’s enjoyment of it.

Two of the tracks in particular stand out for me. The first, John Riches’ clarinet rendition of George Lewis’ superb “Burgundy Street Blues,” accompanied only by Norman Munroe on banjo, is one of the best I have heard. The other is the sole rag on the play list, the May Aufderheide composition “Dusty Rag”—one of her finest. Although piano is usually featured in ragtime, here the band shows that rags can be played quite competently without one, following in the footsteps of Ken Colyer, Chris Barber, and others, who included in their repertoire ragtime numbers played by full (and “pianoless”) bands.

These two CD’s are very good ones, indeed, played by a band which has not enjoyed widespread notice or renown. Since this is Volume One, I certainly hope that there will be successive volumes, perhaps bringing the band up to date. (There appears to be only one other recording, Meet Me with Your Black Drawers On, listed as by the Red Beans ‘n’ Rice New Orleans Revivalist Jazzband on the now defunct Raymer Sound label [RSCD 753, released in 2002], but I have not yet come across a copy or heard it.) The band deserves to have more recordings available. Contact Stuart McLean at <[email protected]> for more information on obtaining this dual set on Practical Sound Systems.

Dallas Blues; Magnolia’s Wedding Day; Burgundy Street Blues; Just a Closer Walk with Thee; Lily of the Valley; You Tell Me Your Dream; What a Friend We Have in Jesus

Personnel: as above, except Jim Finch, drums

Personnel: as disc one, except Jim Finch, drums