Requiem for a Publisher

The reader will note that a rather morbid undercurrent has run through this column over the past two months. In May, I noted the death of Frank Jacobs, a writer I much admired for his satirical contributions to Mad Magazine and who remains largely underappreciated outside its readership; in June, I remarked on the unfortunate coincidence of my age with that of New Yorker founder and longtime editor Harold Ross at the time of his passing. In spite of the country now deliriously opening up to sunshine and fresh air after the Long Intermission (which I should duly celebrate), I regret to say that this column is poised to be a hat trick for the Grim Reaper.

On Wednesday, May 26, Don Jones, editor and publisher of The American Rag, died at the age of 89. The following morning, his wife Cathie posted this statement on Facebook: “I have sad news this morning. My sweet husband, your friend, publisher of The American Rag, earned his angel wings last night. Don had hospice care for the past seven months and passed peacefully at home holding my hand. He studied and practiced Buddhism for 25+ years and believed in reincarnation, so I expect we’ll meet him again.”

I was shaken to hear the news. His presence in the world was of monumental importance to me if only that The Syncopated Times would not exist if I hadn’t purchased the Rag from him in December 2015. In fact, where I am in my own journey at this moment is, for good or ill, directly attributable to our lives intersecting at a crucial time for us both. 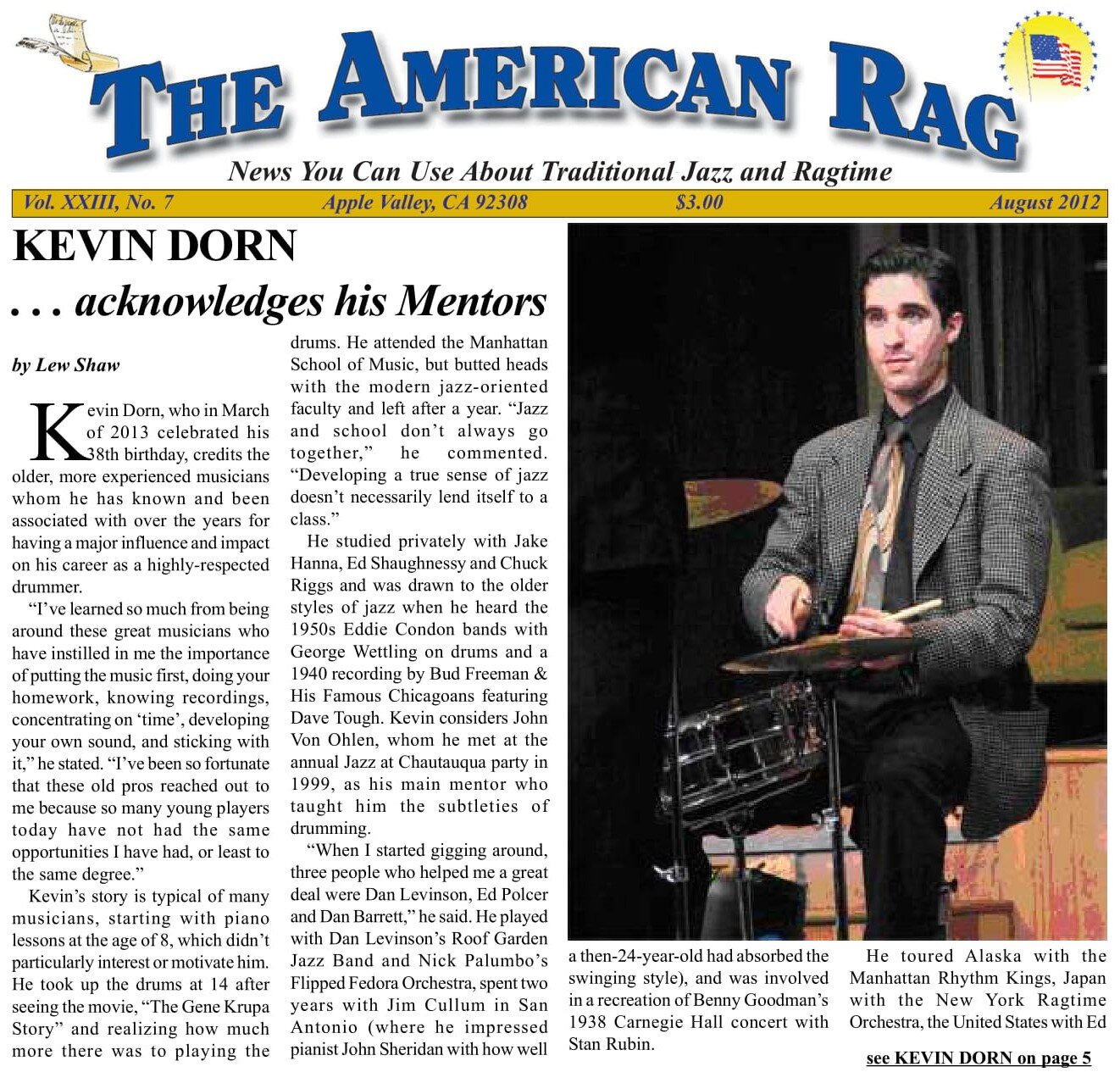 I was sitting at my computer in Upstate New York, minding my own business, only to open an email from Don Jones to discover that I had been recruited as a writer for The American Rag. I did not apply for the job. It turned out that Russ Tarby, editor of JAZFAX, had been hired to fill the position on the paper of compiling Festival Roundup which had been left vacant by the death of Frank Grace. Russ recommended me, since I then was writing a column for JAZFAX and had demonstrated to his satisfaction that I could swing a keyboard.

As to what prompted me to make an offer on the Rag and take it over, all I’ll say here is that I sensed the publication was in trouble. At first I tried to convince someone with publishing experience to tender a bid for the paper. That seemed a happier solution, since another could do all the heavy lifting and I could just write an occasional article and live my life. I could continue doing my radio program, reading books, playing piano, working crossword puzzles, and maybe attempting to write novels. It transpired that I took on the heavy lifting myself.

You never really get to know someone until you do business with each other. Negotiations were not smooth—but they proceeded. Don had invested 21 years of his life in The American Rag, and here was an upstart with no name and no track record offering a pittance for his established business. It was the hardest bargain imaginable. Off the table was a computer loaded with the requisite publishing software, but he accepted my money. (“You’ll never be able to publish The American Rag without this computer.”)

In the end, he was absolutely right. I never did publish the Rag, since I immediately relaunched the paper as The Syncopated Times, and I taught myself to use open-source Scribus for layout. But Don did send me all the extant computer files for the Rag. What happened after the transfer of ownership is more convoluted, and should be cloaked in the mist of forgetfulness. I will say that running the gauntlet of publishing my first issue, and contending with my own learning curve, the USPS, and the various documents and permits that I needed was made more challenging with the ankle weights Don Jones provided me. I overcame that additional resistance and felt improved thereby.

Though Don and I were inextricably tangled through our respective publications, I never really “got” him. Others knew him far better than I did. He used his paper as a political bully pulpit—and I have struggled (not entirely successfully) against any inclination I might have to do the same. I’ve spent six years trying to make all the pieces fit—the professed Buddhism and the mindset redolent of Fox News—and I remain mystified.

When Don called me last year, he said that he was bedridden but that he was enjoying his life. He was unable to walk due to arthritis, but tooled around his house on a motorized scooter. He was cheerful and affable, and I really enjoyed our conversation. I realized that I quite liked the man, and wish I had gotten to know him under less stressful circumstances.

Politics may make strange bedfellows, but jazz makes stranger ones. We live in a world at the moment where we are quick to disown people over their opinions. I have known many people who held beliefs I consider repellent, but I still loved them. If we stop seeing each other as talking points and begin to see the underlying humanity, we might start to get along. Words, particularly when twisted into the balloon animal shapes of polemic and propaganda, fail us. Music, somehow, doesn’t.

Don Jones was a unique force of nature, and with each passing month I more deeply appreciate the magnitude of his sustained achievement—because I have his job now.