As the 4th of July fireworks fade from the sky, a contingent of St. Louisans and jazz fanatics from over 30 other cities will prepare to enjoy sparks flying a bit closer to the ground.

The seventh annual River City Mess Around spans the weekend of July 5-7, and features six local jazz and swing bands for a dancing audience. The band line-up is a true reflection of St. Louis’ long-standing, and diverse jazz music identity, with each group representing a necessary flavor of danceable jazz music.

The weekend begins on Friday July 5th with The Sidemen performing in the Architecture Room of the City Museum, an inimitable downtown attraction and source of great civic and artistic pride in St. Louis. 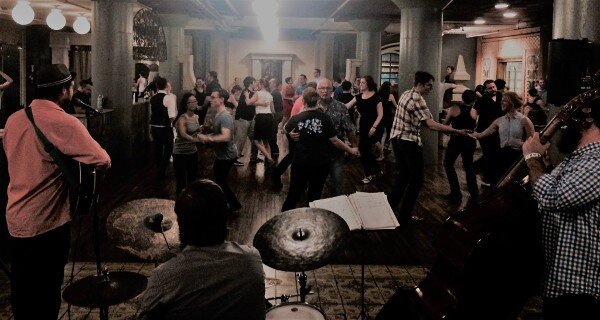 In the traditional jazz realm, the Arcadia Dance Orchestra will be offering a treasure trove of 1920s and 1930s arrangements under the direction of TJ Muller on Sunday afternoon. In addition to a variety of popular hits from this time period, the band will feature resurrected tunes from local African-American bandleaders Charles Creath, Dewey Jackson, and Oliver Cobb. This effort of creating an unmistakably St. Louis sound and repertoire is what breathes life into the event producers’ motto, “Dance local.” Dancers will be inspired to break out their Charleston, and other toddle-based steps, and may even employ their best interpretations of foxtrot and Peabody.

Additionally, Muller’s small group band, the Gaslight Squares, will perform in the dreamy gazebo at the historic Lemp Mansion, a supposedly haunted landmark associated with the infamous Lemp Brewery dynasty, on Saturday afternoon.

Banjoist Jacob Alspach switches to electric guitar for a swingier feel at this outdoor dance. Luckily, shade abounds, and the adjacent air-conditioned carriage house provides a watering hole and respite from the heat.

Saturday night takes place at the historic Webster Groves Masonic Hall, one of those fraternal halls that for dancers are the living rooms of any North American city. An open-to-the-public dance lesson will kick off the weekend’s most populated event, and long-time favorite Miss Jubilee will furnish dance music throughout the evening. The band is known for their territorial mélange of jazz and swingin’ low-down blues, which is inspired by African-American artists such as Big Bill Broonzy, Victoria Spivey, and Stump Johnson. 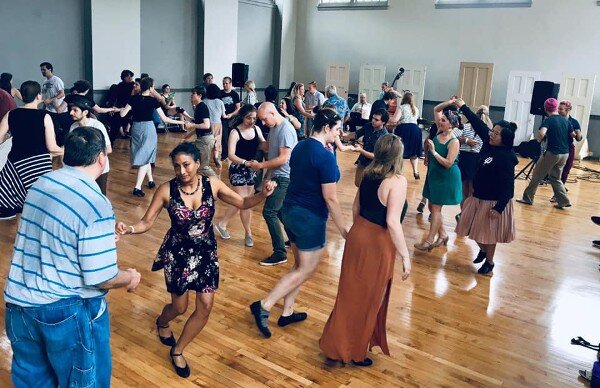 Two dance contests take place at the Saturday dance. The first one is a Short Showcase contest in which contestants, either alone, in pairs, or in trios, will present their original choreographies to recorded music for a chance to win a coveted pass to the Nevermore Jazz Ball & St. Louis Swing Dance Festival in November 2019. The second contest is a Jazz Battle, a head-to-head tournament style contest fueled by the live music of Miss Jubilee. Competitors will be encouraged to dance musically in an improvisational manner for a chance to win a cash prize.

When the main dance ends at midnight Saturday night, the late night dance party begins at the low-lit Central Studio of the Skinker-Debaliviere neighborhood. Here, until almost four o’clock in the morning, Sweetie and the Toothaches will cause a foot-flying riot with their driving jump blues and swing. Their sound is not only appropriate for the most favored partnered swing dance styles, it’s ideal for regional styles such as St. Louis Shag and Imperial Swing.

The closing party of River City Mess Around features local legend Tommy Halloran and his Guerrilla Swing band at the cozy musical hotbed called the Focal Point in Maplewood, Missouri. Halloran’s post-war jazz and blues has a magical originality, and with references ranging from Armstrong to Monk, puts forward a rhythmic and tonal versatility that appeals to all jazz and swing dance fans. There’s a reason this artist has been on the line-up since the beginning of the festival.

The first River City Mess Around was merely a group of dancers roaming from gig to gig, dance floor to dance floor, in a semi-organized way. Seven years later it is a musical reunion that can only be experienced in St. Louis, Missouri.

Christian Frommelt is a passionate swing dance instructor, performer, and social dancer who has dedicated his life to bringing people together through music and dancing. Christian is the foremost aficionado of St. Louis Shag, which he learned in his hometown from original jitterbugs through interviews and close study.