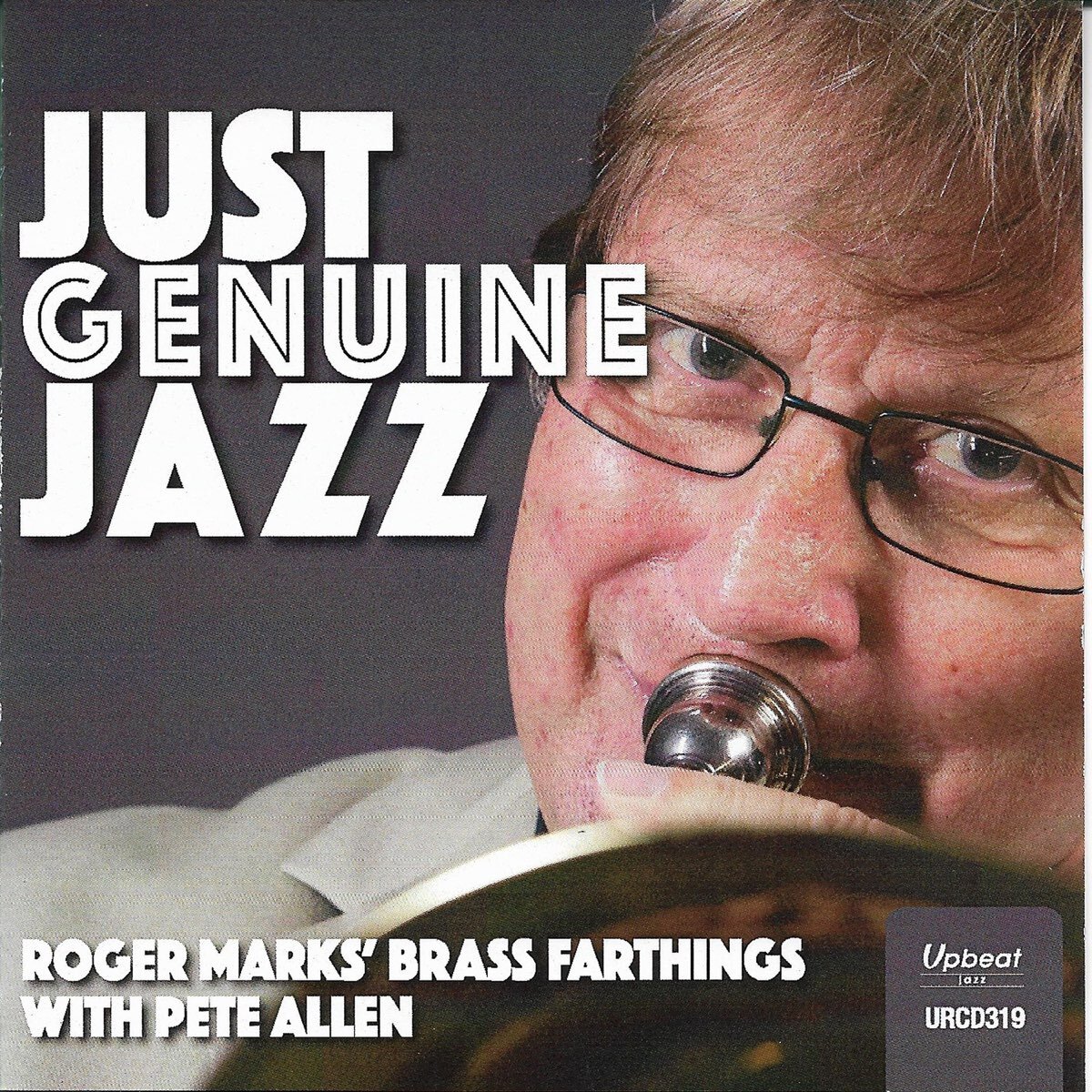 The personnel of the CD under review here, Just Genuine Jazz, is almost identical to that of a previous Upbeat Records issue by this same group, Roger Marks’ Brass Farthings’ Higher Ground (UCD290). Only the bass has been replaced, Tony Mann taking the place of David Holdsworth. The repertoire on Just Genuine Jazz, like that on Higher Ground, consists of a variety of tunes and songs taken from an assortment of genres. As Marks says in the notes, the tunes have been chosen on the basis of their not having been done to death by other bands; another criterion being “the strength of the melody coupled with a certain degree of eccentricity if possible” (although he does not elaborate on “eccentricity”); and the final criterion being that he simply “likes them.”

The result is a collage of tunes: pop (“Love Me Tender”), Latin (“Spanish Eyes”), country (“I’m an Old Cow Hand”), folk (“Delia’s Gone”), hymn (“Abide with Me”), show (“Honeysuckle Rose”), etc. There is even a tune reputedly (if somewhat erroneously) from the larger-than-life 16th century English monarch Henry VIII (“Greensleeves”). If, as the cliché has it, variety is the spice of life, it can be found here in abundance.

Familiar as almost all of the tunes in these tracks will be, again the arrangements give them a new gloss. This can be seen in “Abide with Me” where the tempo it is taken at is a medium one, not the usual dirge. This tempo is maintained right through the closing ritard. Then there are two tunes that “demand” a Latin rhythm: “Spanish Eyes” and “South of the Border.” With no percussion in the group, the task falls to the string bass alone on the first and to the string bass and banjo on the latter, and they bring it off quite well.

The arrangement of “When Johnny Comes Marching Home” lends drama. After a four-bar intro by solo banjo, the trombone leads the ensemble through to a sousaphone solo, backed by the banjo. A clarinet solo follows, the clarinet staying for much of it in the high register, followed by a trombone solo, leading into the ensemble once more. After the ensemble chorus, all drop out save the banjo, which goes into a ritard, coming almost to a stop. The trombone then takes over, leading the ensemble at the same dirge tempo the banjo established and maintaining it until the end. This very nice contrast of the two tempos—sprightly to begin, then morphing into the dirge—is suggestive of the boisterous march to war and then the funereal return when Johnny didn’t come marching home, as was (and is) so often the case.

Two of the tracks feature trombone with no accompaniment: “Greensleeves” and “Caruso.” On the first, after presenting the melody, Marks improvises upon it in successive choruses, the tempo being a slow one. Along the way he makes use of the wa-wa mute and fast tonguing, legato phrasing, growls, and other such trombone techniques. Would the putative composer, the irascible Henry VIII (or someone else), approve all this? I would like to think so. The other unaccompanied trombone solo piece, “Caruso,” finds Marks displaying his command of the horn—precise tonguing, rich tone, very nice vibrato, particularly at the ends of phrases, easy legato phrasing.

In other circumstances some of the tunes’ titles might occasion non-jazz related thoughts. For instance “Love Me Tender” is thought by some to be based on “Army Blue,” the song sung by cadets at West Point on their graduation, or on the song “Aura Lee,” which was taken up by troops of both sides in the Civil War, and of course there is the looming Presley presence. But as Marks plays, one’s thoughts do not stray to such provenances. In the same fashion, the image of Jack Benny torturing an off-key version of “Love in Bloom” from his violin will not arise as the quartet gives it a jaunty treatment.

While some of us may look askance at the tune list, most of it outside the usual traditional jazz purview, we must keep in mind that others, such as Bunk Johnson and Louis Armstrong, have not hesitated to include numbers from many genres in their repertoires. One thing that everyone will certainly be able to agree on is that this CD provides 60-odd minutes of very pleasurable listening.

Honeysuckle Rose; Abide with Me; I’m an Old Cowhand†; Greensleeves; Spanish Eyes; Oh, You Beautiful Doll!; Sunshine of Love‡; Love Me Tender; Mexicali Rose; South of the Border; Love in Bloom; Delia’s Gone (Bahamian song); When Johnny Comes Marching Home; Waiting for the Sun*; I Love You Because; Caruso; Little Ol’ Wine-Drinker, Me*.

No recording data given.