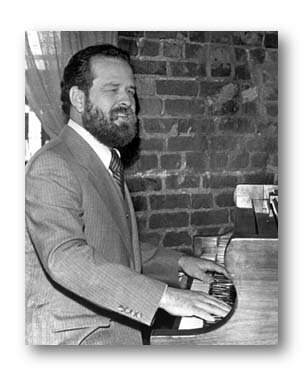 Bob Ringwald, the Sacramento based musician, known to the world as the actress Molly Ringwald’s father, and to many of our readers as a friend in jazz, died on August 3rd, he was 80 years old. His eyesight issues were recognized in his infancy, and by the time he was a teenager he was blind. His famous daughter says in his obituary, published in The Sacramento Bee, “Though he never wanted to be defined by his blindness, he couldn’t help being an ambassador for changing the perception of what is possible to do while living with a disability.”

Like many with a visual impairment Bob Ringwald was guided to play music. He began piano lessons at age five, eventually learning guitar and banjo as well. He started his first band at just 13. He played alongside modern jazz musicians at beatnik spots as a teenager, but was soon drawn to the early jazz styles for which he was known throughout a sixty year career. His first professional experience playing ragtime, honky-tonk, and jazz was at a Shakey’s Pizza Parlor is Roseville, California.

In 1961, a year after graduating from high school and marrying his sweetheart  Adele Frembd, he landed one of his favorite gigs. For 16 years he played piano and banjo at Capone’s Chicago Tea Room, a speakeasy themed pizza joint in Sacramento. He played with many bands over the years, including Sugar Willie and the Cubes, The Boon Dockers, the Fulton Street Jazz Band, based in Sacramento, and the The Great Pacific Jazz Band, based in LA. By the early 70s he was often playing seven nights a week at various nightspots, frequently as the intermission pianist at Turk Murphy’s Earthquake McGoon’s in San Francisco.

In addition to being a musician Bob Ringwald contributed to jazz in a number of other ways. While in LA in the 1980s he hosted “Bob Ringwald’s Bourbon Street Parade” on local KCSN-FM where he featured many albums from his own collection. He was also in constant communication with a large network of friends around the world as both a licensed ham radio operator and an early adopter of internet listservs. He had maintained the Dixieland Jazz Mailing List, founded in 1995 by Peter Lovric, since 1997. The large Our Kind Of Jazz Facebook Group, administered by Bill Sargent, began in 2014 as a spin off of the still active mailing list. These groups have established countless personal connections between jazz fans all over the world.

Ringwald was modest about the role he played in making Sacramento an epicenter for traditional jazz. He had been a board member of the Sacramento Traditional Jazz Society at its founding in 1968 and played the internationally famous festival they produced from its inception in 1974 and throughout its 44 year run. For many years he was the Guest Star Coordinator for the festival. He received just recognition for these efforts when he was crowned “The Emperor of Jazz” at the 2012 Sacramento Jazz Festival.