When I signed up for the Jazz Fest at Sea cruise (January 2-14 out of Miami) as a paying and playing passenger on a Big Birthday Trip present from my kids, the vicious hurricanes that raked the Caribbean beauty spots the cruise was to visit had not even been formed. When they later hit with such unbelievable fury, it was quickly apparent a whole lot of healing would be required.

Especially devastated was Puerto Rico, which Hurricane Maria sledgehammered as it traversed the length of the island, sparing little. You name the need—power, medicine, food, roads, and much more—and they need it. It was to be and is a long-haul recovery. These are neighbors, countrymen already struggling and in serious need of a big hand. So, about 3 a.m. one night, the time of wackiest thinking, I wondered whether we might be able to do some good while we were having fun cruising, jamming, and listening to a world class cast of jazz pros.

Maybe, music could help. I pitched a plan to hold a fund-raiser jazz concert to the Jazz Fest at Sea group and am looking forward to their aid in making the concert a reality. A helping hand from the MSC cruise line would also a big boost.

Shortly thereafter, I wrote a note to San Juan’s take-charge mayor, Carmen Yulin Cruz, to tell her of our plan and asked whether she, standing at ground zero, would suggest a worthy charity if we are able to pull off the concert. Mayor Cruz has been profiled on 60 Minutes, in The Washington Post, and in other national news outlets. She is tireless, and putting it mildly, outspoken. For weeks, she and her staff lived in a bunker under the baseball stadium because City Hall was not usable. She wore her pajamas inside out because, she said, “My world is inside out.”

In my note, I said I thought her city and her territory had been given short, rather back-of-the-hand attention and even if we didn’t raise much money, every step forward could be helpful. She frequently makes her rounds wearing a baseball hat, so I sent her one of our Potomac River Jazz Club hats for a little sartorial variety.

I thought she would merely turn the note over to a staffer and have them dispatch a polite reply thanking me for interest and maybe listing a possible charity. After all, she has a city to get back on its feet. I got more. 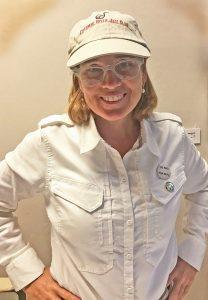 On November 14, as I ate my frozen gourmet four-cheese pizza while watching the Nightly News, the phone rang—and what a delightful surprise on the line. It was Mayor Cruz calling to thank us for the hat, to note that she is a big jazz fan (mentioning Nina Simone) and to report that a foundation is being formed to channel the donations they are receiving. There were no assistants funneling the call, Mayor Cruz picked up the phone herself to personally follow up. She’s lively, engaging, and personable. I asked her to send a selfie wearing the PRJC hat and an hour later, there it was in my email and it accompanies this piece.

With about six weeks to go until we set sail, I’m optimistic the concert will take place. I posted a little piece about the planning and mayoral response on Facebook and was emotionally overwhelmed by the wide and positive reaction to this little venture in the works. It caught the attention of Señor Senior, TST’s esteemed publisher editor guy, which is why you’re reading this now. On board, I hope to rustle up some of the pro players to knock out a chorus or two. And, if you’re cruising, come on by and drop some shekels in the noble cause tip bucket. Help turn the world of the mayor and her constituents right side out again.

Joel Albert is a photographer, musician and jazz superfan. He regularly photographs and films events held by The Potomac River Jazz Club. Find his videos on YouTube.