Shake-em-Up Jazz Band: The Boy In The Boat 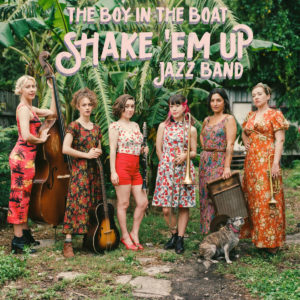 The selections include some interesting arrangements with strong guitar and bass influences. The playlist of 12 tunes has renditions of mostly well-known standards made famous by not only the Mills Brothers and Louis Armstrong, but Bessie Smith and Spike Jones.

“Say Si Si” has Marla on vocals as Chloe weaves that reed in and out of the lyrics.

“The Boy In The Boat” – a 1928 tune originally recorded by the Charlie Johnson Orchestra, it’s not a standard instrumental, but with the clarinet intro and Marla’s “wah-wah” sounds, it is a delightful number.

“Nevertheless” these ladies never sounded so good with the guitar lead and Marla, Molly, & Chloe performing in multi-part harmony ala The Mills Brothers.

“Salty Dog” – here Haruka sings a half-English, half-Japanese version with Molly on guitar and Dizzy on washboard; then the rest of the band comes in while Haruka acknowledges she “loves New Orleans the best.” (Haruka’s infant son, Shouta, accompanied the group on their European tour and during performances often sat contentedly on his mother’s lap!)

“I Double Dare You” – Chloe’s vocals and clarinet are outstanding and all the instruments are featured. This was my favorite piece.

“My Sin” – Marla’s vocalization is heart breaking and you can hear the sorrow in her voice as she claims to have loved “not wisely but too well.”

“Oriental Strut” – everyone joins in on this tune and the instrumental is elevated to sheer joy.

“Eh Las Bas” – lovely version of this standard with all instruments and vocals participating.

“You Always Hurt The One You Love” – with more soul than Spike Jones could ever imagine, Dizzy’s first recorded solo is beautiful.

“Nuts To You” – has the vocal trio (Molly, Marla & Chloe) in perfect harmony in this fast paced version with all the instruments and lots of scat singing.

“Wild Women Don’t Have The Blues” – a fitting choice as the last entry, this song epitomizes these young ladies as Marla changes the line to “Wild Women Don’t Have No Blues” – the No meaning “any” or New Orleans? Either way, this band is fun to watch and hear—let’s hope they continue on their journey and invite us all to join them!