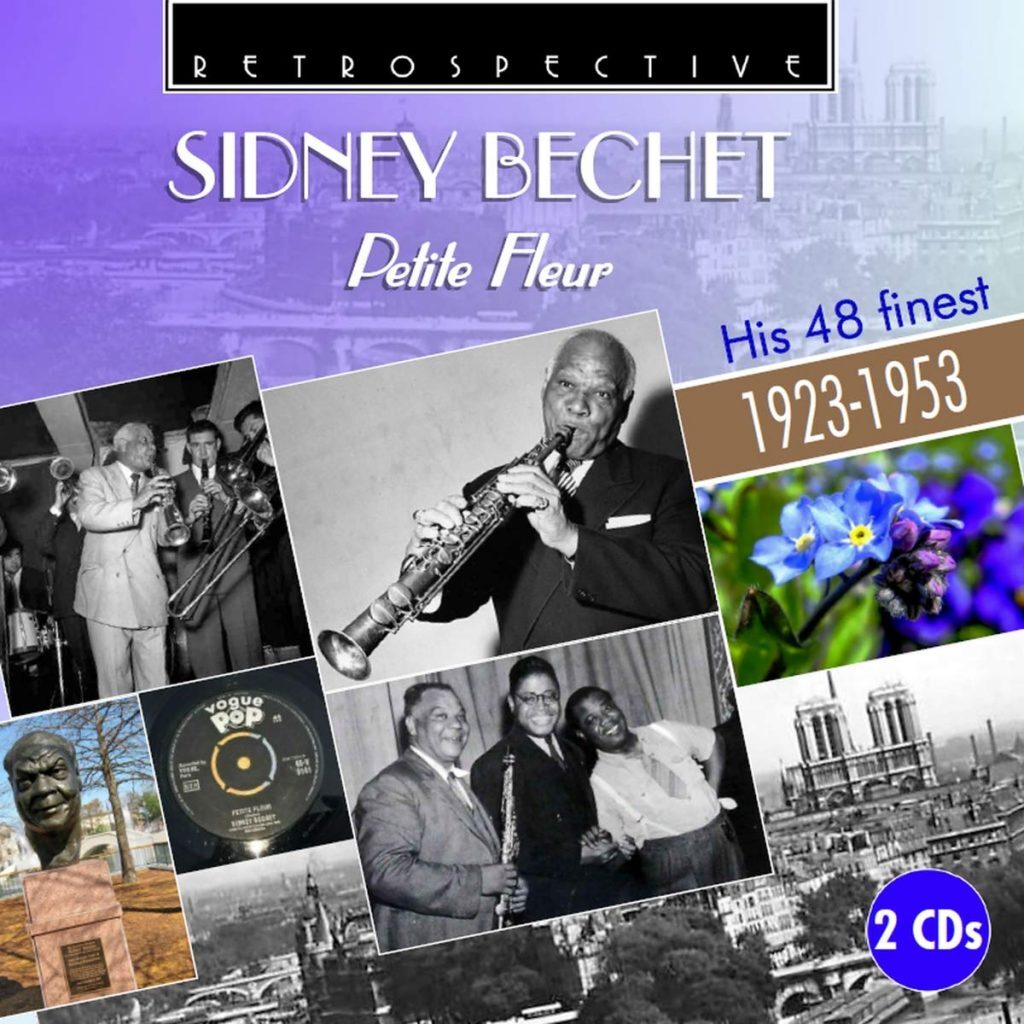 Since this album is a “retrospective,” drawing from previously recorded and issued material in the thirty year period 1923-1953, Sidney Bechet devotees will undoubtedly already have all of the tracks on this double album; so its appeal will be mainly to those with gaps in their collections or those coming to Bechet for the first time.

As will become immediately obvious to anyone unfamiliar with Bechet, he was a force to be reckoned with, easily overpowering many—perhaps most—of those with whom he played. On soprano sax he had no equal, his command of that instrument displaying awesome technique. His vibrato was pronounced, almost a quivering, and his broad, powerful tone lent volume to the sound. As a result he dominated the front line. It took a very strong trumpet or cornet player to hold his ground with Bechet, but as one will hear in these CDs some good trumpet players did manage to do that.

Frequently he went without any fellow front-liners, which allowed him to indulge himself to the limit, the lead being entirely his. Quite often he was backed by two or three players only, essentially Bechet plus rhythm, as is often the form of his Feetwarmers. As might be surmised from this dominating aspect of his performances, Bechet had a considerable ego, which he indulged on stage and off. It can also be seen in the “one-man-band” track, “The Sheik of Araby,” where thanks to multi-track overdubbing, Bechet plays five instruments— soprano sax, tenor sax, clarinet, piano, bass, and drums—with varying degrees of proficiency.

Featured are several Bechet compositions, perhaps the most famous being “Petite Fleur” [“Little Flower”], the opening track on vol. 1. Monty Sunshine (clarinet) with the Chris Barber band from the U.K. recorded this tune in 1956, and it later went on to land among the top ten of the hit parades in both the U.S. and the U.K. Other well-known Bechet compositions, at least among traditional jazz bands, are “Le Marchand de Poissons” [“The Fish Seller”] and “Si Tu Vois Ma Mère” [“If You See My Mother”].

Bechet’s life** was a bit turbulent—in 1922 he was deported from England after 11 days in jail for assaulting a prostitute; later he spent eleven months in jail in Paris for shooting a woman, an act he claimed was accidental as he meant to shoot a musician who had insulted him. He was deported to New York in 1929. According to many who knew Bechet, his manner was a little abrasive; so the gentleness, the tenderness, of “Petite Fleur” and of “Si Tu Vois Ma Mère” is somewhat unexpected.

“Si Tu Vois Ma Mère” may be seen as analogous to another “mother allusion,” that of painter James McNeill Whistler’s Portrait of His Mother, something of a tribute, perhaps. It seems that Bechet enjoyed a good relationship with his mother, who encouraged him from a young age to pursue his musical bent. The French titles he gave his compositions (others being “Dans les Rues d’Antibes” [“In the Streets of Antibes”] and “Les Oignons” [“The Onions”], which are not included in this set) also may be a nod to the last eight years of his life spent in Paris.

In spite of his being a difficult person to get along with but probably because of his musical prowess, Bechet played with many of the jazz giants of his day. In addition to those mentioned above, musicians such as Jelly Roll Morton, “Big” Sid Catlett, Sidney de Paris, Zutty Singleton, Earl Hines, J. C. Higginbotham, Rex Stewart, Henry “Red” Allen, Willie “The Lion” Smith, Vic Dickenson, Pops Foster, Art Hodes, Wild Bill Davidson, and so many others, appeared and recorded with Bechet, and all of them can be found on one track or another in this two-volume set.

Bechet was “one of a kind.” He took the playing of the soprano sax to a height never previously attained and perhaps not yet equaled. This compilation—arguably his “Finest” forty-eight, as the title claims—provides a very comprehensive overview of his accomplishments and gives support to his deservedly holding a place in the jazz pantheon.

**Anyone wishing more details can find them in John Chilton’s Sidney Bechet: The Wizard of Jazz (N.Y., 1987). Another book titled Treat It Gentle (London, 1962) is Bechet’s autobiography, dictated to Al Rose. The title is rather ironic, and in the recounting Bechet depicts himself as a kind, gentle individual, two qualities absent from his character, according Rose: “The kindly old gentleman in his book was filled with charity and compassion. The one I knew was self-centered, cold, and capable of the most atrocious cruelty, especially toward women.”

Among the many musicians and musical groups accompanying Bechet, who plays soprano sax or clarinet, are the following:

All personnel, recording dates, and locations are given in the booklet.