In these times of heated partisanship this paper tries to be an oasis of unity around a shared musical interest. It’s with some hesitation I even start this story but I will proceed because it presents as good an opportunity as may come to discuss the legacy of Stephen Collins Foster, the “Father of American Music.” 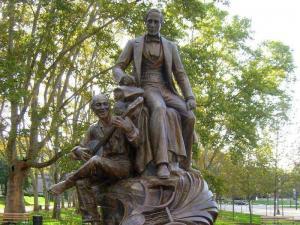 Memorial Museum and Theater in Pittsburgh where it had stood since 1944. Originally erected in 1900 it was moved there from an original location after repeated vandalism. The statue in bronze was created by famous Italian-American sculptor Giuseppe Moretti. It depicts an elderly black slave strumming a banjo as Foster, seated above him, writes lyrics on parchment. The imagery of a barefoot and happy slave at a white man’s feet has been a point of conflict in the city since the civil rights era. It may have even triggered the vandalism that caused the statue to be moved to a more public location so many decades ago.

In 2000 there was a petition to remove the statue and an alternative was proposed of adding an explanatory placard to the monument giving it more context. But nothing was done then, or in 2010 when the issue was raised during a restoration of the monument. At that point a text was even offered for a potential placard. As controversy bubbled yet again last year the city decided it was finally time to remove the statue. They are seeking a private institution interested in displaying it publicly, just not on city property, and plan on putting in its place a statue of a local African-American woman.

It’s a shame the placard was never added. Some context may have lessened the unease the depiction caused in so many viewers and provided the “teachable moment“ defenders of the statue insist it could have offered. I’m also troubled, as a fan of early jazz, that many find the image of a black man with a banjo inherently offensive. The original American art form, Jazz, and this most American of instruments should be available to anyone without raising any eyebrows. Learning banjo should be encouraged and celebrated.

The slave represented is “Uncle Ned”, the character at the heart of a Foster song of that title from 1848. The song is a sympathetic and subtly abolitionist depiction of a black man who shares universal human emotions. While the original lyrics are offensive to modern ears they were revolutionary in their humanity at the time. Frederick Douglass wrote that Foster’s songs “awaken the sympathies for the slave, in which anti-slavery principles take root and flourish.” Uncle Ned is credited with being the first commercial song to contain such sympathies. 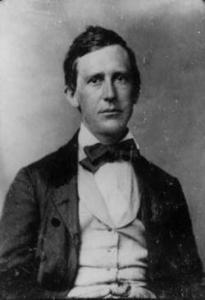 Stephen Foster, who died in 1864, wrote both Plantation Songs and Parlor songs. That is dialect songs like “Swanee River” and “Old Black Joe” as well as popular songs such as “Come Where My Love Lies Dreaming.” Romantic images of the South were very common in the decades before the Civil War, especially in the North. What is often forgotten is that minstrelsy was a primarily Northern phenomenon. Depictions of Southern life were often written by people with no experience of it. Lyrics revealed ignorance as much as racism and described a bucolic ideal.

Foster opposed slavery and many of his lyrics helped extend what was acceptable between the races. His song “Nellie was a Lady” was daring for its description of a black women as a “Lady.” Though blacks were often depicted as happy, lazy, and comically musical by Foster, and his peers, overtly racist and intentionally hateful lyrics became common only as songwriting grew into a commercial profession in the decades following the Civil War. The tropes of minstrelsy solidified as competition for pocketbooks led to increasingly exaggerated and hurtful characterizations. (Like comments on a story about statue removal.) Though Foster wrote for early minstrelsy he is credited with attempting to humanize the genre(1) and shouldn’t be associated with the “Coon Song” craze that came decades later during the reactionary Jim Crow era.

What he should be remembered for is ushering in a form of uniquely American songwriting, and in many ways the commercial songwriting industry. Before Foster most American culture was still imported from Europe. His songs were our first national “hits” uniting the continent along the railroad lines. They remained attached to his name with a cachet authorship in song did not previously have. He also wrote some of the earliest American Popular Music; songs written with the public taste and profit in mind. He created an expectation of structure and emotional depth that was lacking in the oral folk tradition.

Most of what we think of as folk music consists of songs that were polished up by professional songwriters in the late 1800s. They used scraps of lyrics that had previously been thrown together in the moment. Songs often had little coherency, and lacked the verse chorus structure that we now take for granted. Sometimes melodies were borrowed and sometimes entirely new creations were made to appear as if they had ancient origins. Foster’s were top down songs crafted to appear as if they were from the soil. Classical music and the Arts and Crafts movement were decades behind him chasing this Romantic era notion.

Foster was the first American to make a living as a song writer and his success inspired other smart men and women to join the new profession. Previous to Foster you might sell a song, or even several, but compensation was minimal, and you’d never consider writing songs full time. After all these were the 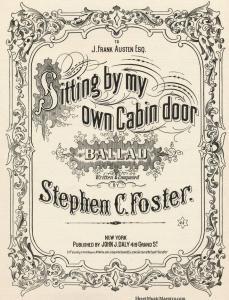 days of sheet music. The road from Foster to the Tin Pan Alley song mills of the 1890s is a short one. Though he made more money selling songs than anyone had before him he was never rich, and he had a love of hard living. Foster died at 37 years old with pennies in his pocket. He couldn’t have imagined people would soon be raising statues to him.

Pianos in middle class homes became ubiquitous in the decades after Foster’s death. His approachable songs grew in popularity until he took on a heroic stature. In the 1890s money was raised in Pittsburgh to honor their now famous son. When the statue was erected, 50 thousand people lined the streets and schoolchildren sang his songs.

The design of the sculpture was chosen by committee. A local paper reported one of the members saying the statue pictured Foster “catching the inspiration for his melodies from the fingers of an old darkey reclining at his feet strumming negro airs upon an old banjo.” This overtly romanticized sentiment captures perfectly the thinking of many Americans, black and white, in those early ragtime years. 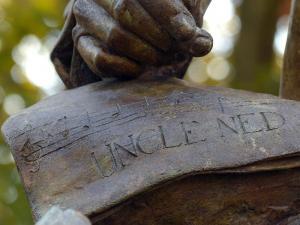 They were enamored with the idea that what made American music uniquely American, and distinguished us as a new and powerful nation, was an inheritance that came from Africa as well as Europe. W.E.B. Du Bois said “the songs of white America have been distinctively influenced by the slave songs or have incorporated whole phrases of Negro melody”.(2) It was that joint contribution they were attempting to depict- Ned holding the banjo while Foster holds the pen. It is a dynamic that doesn’t avoid all criticism, but it should be the same criticism leveled at John Hammond and Alan Lomax.

Because I know the history I can see the statue as the statement of racial peace it was intended to be. When I look at Uncle Ned I see a sympathetic depiction of a character. I easily found a very similar juxtaposition of Charles Dickens with one of his characters from the same time period. As the character Ned is already dead in the song I’ve also speculated that the statue could be interpreted as showing the two together in heaven.

Though I see what I see, and wish a plaque had been attached to the statue explaining it for modern eyes, I can also imagine what others coming across the statue see. Music education has suffered in the last decades and many will have no idea who Foster was. An unexplained statue won’t make up for this (but the museum across the street could help). As a white man I can’t know what a black family strolling the park feels when they see this statue, but I can listen, and for decades many

have expressed their disgust at what they take as an old and hateful caricature. From what I’ve found the controversy has never been about Foster himself, only this statue, and for that I am relieved. Foster’s contribution to American music is enormous, on a level with Scott Joplin and Louis Armstrong. His story should be taught and his songs sung. One statue outside a cathedral to his memory isn’t worth saving when that risks tarnishing his legacy by conveying an unintended, and incorrect, message. The energy spent grieving the statue would be better spent saving music education in our schools

(1) “These later songs reflect a growing uneasiness with the earlier style, ultimately leading him to a period of withdrawal from the lucrative minstrel genre. When his parlor ballads could no longer sustain him financially, however, he merged the two styles into a new hybrid genre, “the plantation melody.” The songs published under this rubric use musical strategies found in the ballads and focus on nostalgic themes, thus attempting to humanize the image of the oppressed slave.” Mathew Shaftel (2007), Singing a New Song: Stephen Foster and the New American Minstrelsy, Music & Politics Vol.1 Iss. 2 (2007)

(2) “And so by fateful chance the Negro folk-song—the rhythmic cry of the slave—stands to-day not simply as the sole American music, but as the most beautiful expression of human experience born this side the seas. It has been neglected, it has been, and is, half despised, and above all it has been persistently mistaken and misunderstood; but notwithstanding, it still remains as the singular spiritual heritage of the nation and the greatest gift of the Negro people.” W.E.B. Du Bois- Sorrow Songs

This story was originally published here on May 3, 2018.  It was printed in our June 2018 issue in slightly altered form and for archival purposes, the dateline has been changed.