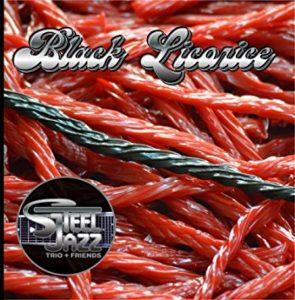 This is an unusual jazz album—pedal steel guitar is a rarely-used instrument in jazz recording and this is a self-produced album by a group who came together in the music department at Five Towns College on Long Island, NY.

On this CD there are fourteen original compositions making an hour of interesting listening. Brian Dumont is leader and pedal steel guitarist; Brandon Nichol is on guitar; Jared Burnett, bass; Tyler Odell, keyboards and saxophone; and Anthoney Bryan, drums. Each member of the team contributes several tunes with the exception of the drummer. Consequently, each instrumentalist gets his share of the musical spotlight.

In a phone interview with pedal steel guitarist Brian Dumont, I learned that the group has been together for only one year and that this is their second album. The individual members were interconnected through their associations in the music department at Five Towns College.

It is somewhat of a challenge to describe new compositions because both the listener and the reviewer don’t have previous auditory experience with which to compare. Let me just say that this CD makes for interesting listening throughout.

A few words are in order related to pedal steel guitar, as this is a somewhat rare instrument in jazz circles. The instrument is normally about the same height as a piano keyboard. The player sits and usually the left hand moves a metal bar to change the length of the strings, much like the guitarist uses fingers to fret the strings to get the desired note. There is a set of foot-pedals which tune the notes in much the same manner that the concert harp changes the string length so that the proper notes of the chord are sounded.

A compliment for Mr. Dumont is that the usual steel guitar musical cliché—a wah-wah sound made by country steel guitarists—is essentially non-existent on this recording. He tells me that his original instrument was the guitar and that several years ago, fascinated with the sound and the musical possibilities of the pedal-steel, he made the switch and he’s glad he did.

A Pensacola reference is in order. Several years ago, Doug Jernigan, a Pensacola native and one of the outstanding pedal-steel guitarists in Nashville performed for a Jazz Pensacola event. We put together our best local jazz musicians for a delightful evening starring Doug. He played beautifully on the instrument and explained the mechanics and details of playing that complex instrument. And, also to his credit, there wasn’t a single wah-wah sound the entire evening.

A year or so later, veteran 7-string guitarist Bucky Pizzarelli came for a Pensacola JazzFest. Someone brought an older LP for the artist to sign, which Bucky had made with Doug Jernigan. Bucky had just made another recording with a different steel guitarist and remarked that they’d originally wanted Doug for the current recording but travel plans were such that they had to get another steel guitarist.

Life is a series of compromises. What are the disadvantages of this recording? As I see it, there are two: there are no liner notes to accompany this CD. Also, there are all original compositions. Advantages: Cost of the CD is only $12. Also, the purchase will enable and encourage the emerging group to produce another CD which, they promise, will come with liner notes.