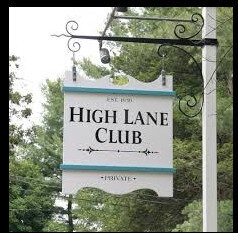 When I was a young sprat in the 1970’s my family belonged to the High Lane Club in North Haven, CT. It’s not as posh as it sounds. The club, for middle-class families, was situated on 4+ rural acres with a well-kept pool and lounge area, six tennis courts, and a basketball court. The standout of the property was the clubhouse, a massive three-story white clapboard building from the 1920s. The centerpiece on the second floor of the building was the ballroom large enough for 200 people, sporting a 6-ft-high stage, with spacious backstage and dressing areas, an extensive lighting board and acoustic piano. Stepping into the ballroom at age five, although I couldn’t articulate it then, felt like traveling back in time. The wooden walls, floor, stage, and 30-ft ceiling combined to create wonderful acoustics: warm, natural, and balanced. At evening events or during a show, the glass chandeliers sparkled, throwing gentle, shimmering shadows around the room.

Although ostensibly an athletic club (of which activities I reluctantly and fumblingly partook), the High Lane Club had a vibrant dramatic society that mounted an annual musical. From about age six to nine, I would spend many an evening on the floor of that ballroom, surrounded by the (minimal) 1st -4th grade homework that I never managed to complete as I was enthralled with watching the rehearsals. My Mom (who was always in the chorus) and Dad (who was usually the lead as he had the best voice in the club; while his vocals melded Mario Lanza with Marvin the Martian, he could sing in tune) were not able to afford a sitter, so they trundled me (and later my sister) along with them. I never complained! Everyone was so nice to this little, (sometimes) quiet tow-headed urchin who learned a good deal about what goes into preparing a production, albeit at a modest level.

I loved the lights, the lines, the songs, the starts and stops, the getting it just right over time. I thought the director had a lot of power the way he or she would tell people where to go and how to get there and they’d DO it! However, I soon realized that when it comes to a musical, the real power lays in the hands of the music director. The man who filled that role at High Lane Club was a talented, wry fellow named Jay Hickerson. Meeting him, getting to know him, and learning from him would change my life.

When I wasn’t gawking during rehearsals at the club, I was home pounding out rudimentary versions of tunes I was learning by ear or playing simple arrangements from easy-piano books (just reading the right hand and playing some chords I picked out that sounded okay with the left). My Mom was adamant that I learn to read music properly and take some lessons. The problem was that I was precocious, opinionated, and, frankly, often short-tempered and obnoxious, especially when confronted with something in which I was not interested; having someone try to teach me to do what I thought I was already doing just fine was going to be a challenge.

She invited Jay to take a crack at it. He was busy teaching during the day, performing in the late afternoons at retirement homes and, when not directing the musicals at High Lane, traveling around New England performing a fascinating solo show involving old radio programs and commercial jingles, but he agreed to have a go with me. He was friendly and personable with the right touch of authority to not-always-so-gently steer me in the right direction. We started out well. He helped me with my reading in both clefs and even listened to me when I told him that I would only (while rolling my eyes) try to learn the easiest pieces of Mozart, Beethoven, Chopin and their ilk if I were allowed to spend time playing ragtime, my first love. He readily accepted this diversity and proved adept at coaching me in all styles. What I HATED were the exercises: scales, Hanon, arpeggios…BLECHH!

Eventually my extreme antipathy towards the technical aspects of pianism caused some friction between Jay and me. He was patient, but he usually saw through my botched execution of a four-octave scale in contrary motion and my attempts to sight-read the pieces I’d avoided all week in favor of going over (and over, and over) “The Bos’n Rag,” “Peacherine Rag,” or “Hello, My Baby.” Over the next couple of years, my progress slowed, Jay became—rightly—more cross (although he never gave up on me) and we were both getting frustrated with the situation and each other.

One afternoon when I was 12, in the most mature manner I could muster, I told him I thought I should quit. I was tired of trying to learn the classical repertoire; I enjoyed listening to it but hated the way I massacred it. I falteringly expressed I wished to be my last lesson and that I was sorry as I’d felt I’d let us both down.

Jay looked at me for a moment and asked “Will you give me one more week? We’ve been doing this for about three years now. Give me one chance to try something.” I looked dubious but respected and genuinely liked him; he was funny and kind, and I was sincerely sorry to end our weekly meetings. I nodded assent and spent the next week tearing through all my rags and learning as many new tunes by ear as I could, all the while wondering what Jay had lying in wait.

When he arrived, he had a stern expression on his face and intoned, “I’m going to give you something very special today. However, this is not a gift; it’s on loan. If you wish to make use of it during our lessons, you will have to promise to learn, not fake, the remainder of your assignment each week, including scales, classical pieces, whatever I think you need to progress. I won’t ask if we have a deal until the end of the lesson.”

I sat arms folded on the bench and curtly nodded (really, I was a total brat!). He then took from behind his back a thick three-ring notebook and placed it on the music rack of the piano.

“Sure looks real to me,” I quipped, my twelve-year-old self thinking I was the embodiment of wit.

“Open it and you’ll see what I mean.”

When I opened it, it actually did look fake; it wasn’t music I recognized: There was no bass clef to be seen and there were funny letters above the melody written out in the treble clef. “Jay, what am I supposed to do with this?” I looked at him quizzically.

“You play the melody with your right hand and those symbols above refer to the chords you can play to accompany the melody.”

“I know a few chords, but a bunch of these look really hard.”

“They won’t be in time. You’ve always tried to get away with faking it at the piano in front of me; with this book you’ll get much better at it!”

“But won’t it sound too simple?”

“Not after I’ve taught you some methods to flesh out the information on these pages!”

That’s what he would spend half of our weekly lesson doing; he taught me chords, patterns, styles, riffs, fill-ins, intros, codas, and had me incorporate them into my renditions of the tunes in the Fake Book: tunes, by the way, that were standards from the 1910s-1940s. He eventually had my mom make me a copy at work and thus I had a copy of the first fake book that had ever come out in this country. Turns out long before the parade of Legitimate Real Books and Hal Leonard/Warner Brothers publications there were (and still are) underground books written out for musicians by musicians. Plunk your money down and rather than spending $5 per tune, for $50-75 you’d have more than 800 tunes at your fingertips IF you knew what to do with them.

Jay taught me what to do with them. He turned me around and showed me more joy than I can ever describe. He introduced me to further underground collections of music (the photo of one is on this page) and I devoured them all. My first Fake Book was always my favorite. I still have it and I love it, wrong chords and all (another thing Jay would do was make music theory fun by guiding me to improve the suggested harmonies in my fake books).

Jay’s retired now; he lives in FL with his wife, Karen. I know that he is aware of how fortunate I feel to have had such an open-minded, gifted musician and teacher devote time with me; I’ve told him many times. He turned my musical experience from struggling through an average of four pieces a month to working up 20-30 pieces a week to some semblance of performance level. I am a musician today because of Jay Hickerson. Thank you, Jay!