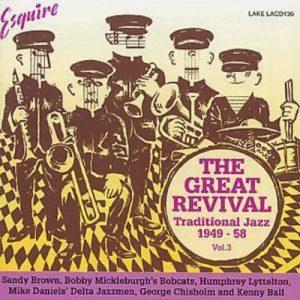 Among his many projects for his Lake label, years ago Paul Adams acquired and reissued most of the British trad jazz recordings that were originally put out by the Esquire label including the five CDs in his Delving Back series and the five CDs covered here in a series titled The Great Revival: Traditional Jazz 1949-58.

Each of the latter features several bands from the prime years of the British trad movement, providing early glimpses at some major names along with sessions by forgotten but worthy bands of the period. In exploring the British trad boom of the 1950s, one is struck by the sheer quantity of excellent (if sometimes now-obscure) recordings, and the variety which ranges from 1920s jazz and Chicago-style Dixieland dates to small-group swing and sessions that are closer to the music of Bunk Johnson and George Lewis.

Vol. 1 in this series focuses on Bobby Mickleburgh’s Bobcats, the Tony Short Trio, Cy Laurie, and the Christie Brothers Stompers. Mickleburgh was an exuberant trumpeter who leads a hard-driving sextet, pianist Short performs two numbers with a trio that includes clarinetist Pip Gaskell, the Johnny Dodds-inspired clarinetist Laurie is featured with two different groups (including rare titles from 1951 with a quartet that includes trumpeter Les Jowett), and the Christie Brothers Stompers (also from 1951) is represented by eight somewhat ragged ensemble-oriented numbers with the future star Ken Colyer on trumpet.

Vol. 4 starts out with a particularly well-conceived session by trumpeter Les Jowett’s Jazz Seven that has inventive frameworks and very individual soloists. Also included are the first two studio sessions of the still-active trombonist Chris Barber along with spirited sets by the Second City Jazzmen and the Merseysippi Jazz Band.

Vol. 5 is one of the strongest CDs in the series with Kenny Ball heard on his first studio recordings as a leader, and early titles from singer George Melly, clarinetist Terry Lightfoot, Acker Bilk, and Chris Barber.

Because the Lake label has stopped releasing new sets, now is the time to fully explore that label’s impressive output before The Great Revival 1949-58 series and other CDs in their catalog become scarce.

Since 1975 Scott Yanow has been a regular reviewer of albums in many jazz styles. He has written for many jazz and arts magazines, including JazzTimes, Jazziz, Down Beat, Cadence, CODA, and the Los Angeles Jazz Scene, and was the jazz editor for Record Review. He has written an in-depth biography on Dizzy Gillespie for AllMusic.com. He has authored 11 books on jazz, over 800 liner notes for CDs and over 20,000 reviews of jazz recordings.Yanow was a contributor to and co-editor of the third edition of the All Music Guide to Jazz. He continues to write for Downbeat, Jazziz, the Los Angeles Jazz Scene, the Jazz Rag and Jazz Inside.