The worlds of jazz and classical music are often mysterious to both parties, and sometimes jazz musicians can get overwhelmed with understanding the classical tradition. This can become apparent with the centuries old European musical terminology, still employed in today’s jazz notation.

So as a public service, I have undertaken the task of “translating” some of the most useful classical terms into the world of jazz, for the benefit of today’s working jazz musician. So here we go with the Professor’s Jazz Glossary of Practical Musical Terminology.

Let’s start with dynamics. There are scores of European terms to indicate subtle grades of volume to be interpreted by the performer. Things are not so subtle for jazz bands. In jazz, we can boil it down to a few notable dynamic levels: 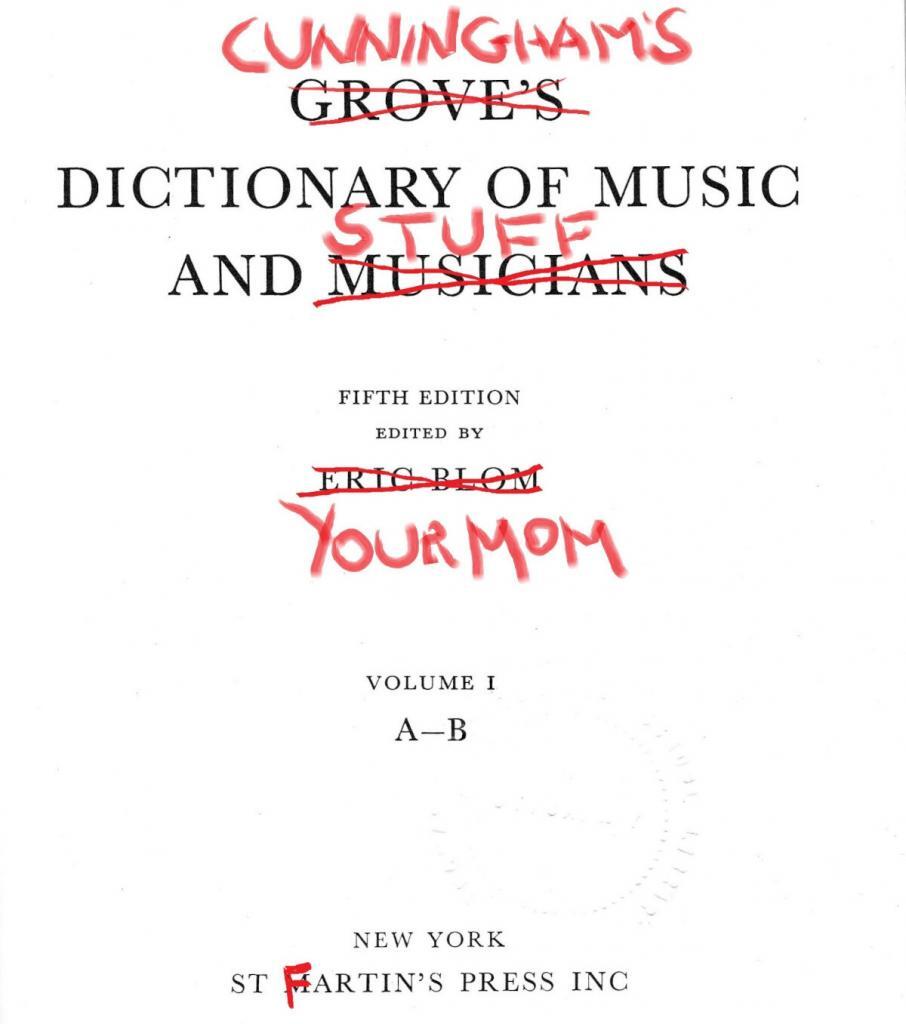 forte: the band is playing

fortissimo: the band is drunk

mezzo piano: the band has to read music

pianissimo: the band is on a break

And now, continuing with our general Glossary of Terms:

a cappella: when the vocalist calls a tune that the band doesn’t know

accelerando: when the drummer is excited

allegro: how moderato ends up when you have a bad drummer

rallentando: when the drummer is tired

accidental: the wrong notes the trumpet player plays because he had a root canal the day before the gig

atonality: the tuning of most pianos in NY bars

basso continuo: when the bass player doesn’t realize the song has finished

chord: what a piano player plays

broken chord: what a piano player plays on most NY pianos

descrescendo: when the manager of the club tells you to keep it down

crescendo: when the manager leaves the room

double stopping: when the bass player is late to the gig because the subway was running local

encore: what the band does when they realize there’s still five minutes left in the set

glissando: how trombone players play a run of fast notes

grace note: when you’re not sure if that melody note was an E or Eb so you quickly play them both to be safe

intonation: something you hide with vibrato

key: something a vocalist spends five minutes of stage time figuring out before the start of the tune

lamentoso: the way you play when you regret saying yes to the gig

modulation: what the band does when the singer starts the song in the wrong key

loco: what your parents thought you were when you told them you wanted to play jazz for a living

ostinato: what the rhythm section does at the start of the tune until the trumpet player remembers the melody

presto: that magical feeling you get when the bandleader produces your drink ticket

prestissimo: the speed at which the band goes to the bar when they get their drink tickets

relative minor: when the guys in the band hit on the bass player’s younger sister

ritardando: coming up to the part of the tune you haven’t practiced

segue: (this one has multiple meanings):

1. When the band can’t remember how the song ends so they go straight into another one

2. The means by which the trombone player gets to the gig coming straight from his mall-cop day job

slur: how the audience member speaks when he approaches the band after a few drinks to tell you he’s a really good singer

subito: the speed at which the band wants to be paid at the end of the gig

timbre: what clarinets would be better used as

transition: when your banjo player Paul now wants to be called Paulenne

tremolo: the sound of a band with a nervous bass player

transposition: when the stage is too small so the drummer has to set up on the floor

virtuoso: how every NY jazz musician describes themselves in their bio