It all began back in 2010 when the Jazz Legacy Dixieland Band was organized at Brigham Young University. Trumpeter Austie Robinson, trombonist Brian Woodbury, and clarinetist Jory Woodis formed the frontline, won some awards, and found that they enjoyed playing together. Along with pianist Kurt Reeder, bassist-singer Zoe Jorgenson and drummer Brennan Tolman, they eventually became an independent band.

Originally known as the Salt City Six, they recorded their debut CD Sunnyside Avenue in 2015. By the time they made their second recording, The Salt Lake City 7, they had changed their name to reflect the full name of the city of the band’s birth, and the expansion of the group with the addition of acoustic guitarist and banjoist Parker Speirs. While each of the individual musicians has experience playing more modern styles of jazz, they stick to 1950s-style Dixieland throughout these two recordings, sounding comfortable performing trad jazz. 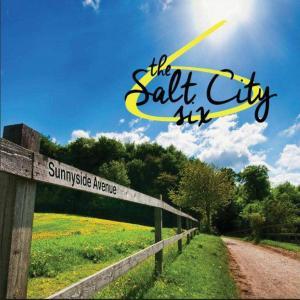 Sunnyside Avenue begins in exciting fashion with a version of “That Da Da Strain” that is taken at a racehorse tempo. Somehow each of the soloists manages to sound relaxed at the rapid pace. The title cut, “Sunnyside Avenue,” is an original by trombonist Woodbury which not too surprisingly uses the chord changes of “On The Sunny Side Of The Street.” Otherwise the set is filled with Dixieland standards and a few offbeat choices.

The group utilizes both witty arranged ensembles and freewheeling playing along with hot and concise solos. Trumpeter Robinson is extroverted in his playing, Woodbury frequently displays his sense of humor, and clarinetist Woodis is quite fluent.

The repertoire includes such unusual choices as “On The Flying Trapeze” (which has a stop-time chorus launching each soloist), “I’ve Been Workin’ On The Railroad” (with all of the themes), “Old Folks at Home,” and “John Henry.”

The latter has a fine vocal by Zoe Jorgenson before it climaxes with some wild ensembles. In fact, in addition to the fine musicianship and inspired repertoire, one of the main strengths of Sunnyside Avenue is the many almost over-the-top ensembles that are heard, including on “Someday Sweetheart” and “South Rampart Street Parade.” This is a band that is not afraid to take chances and to explode.

Other colorful touches include the group vocal on “I Ain’t Gonna Give Nobody None Of My Jelly Roll” (which precedes a crisp trumpet solo worthy of Rex Stewart), the use of guest tuba player Marcus Voght on “That Old Rugged Cross,” and the harmonizing trombone behind the clarinet on “Poor Butterfly.” 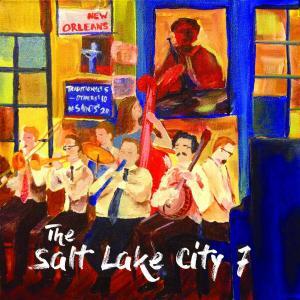 The Salt Lake City 7 CD benefits from the use of Parker Speirs’ guitar both in the ensembles and as an occasional solo instrument. Once again there is an original (“No Regrets”) that is based on another song (“Someday You’ll Be Sorry”), and a fairly wide repertoire that includes a witty “Take Me Out To The Ballgame” and a joyous “That Little Light Of Mine.” The solos are consistently rewarding and there are bits of humor, such as during the first half of the clarinet solo on “Milenberg Joys” and the use of multiphonics by trombonist Woodbury on “Basin Street Blues.”

Missing from this CD are the wild ensembles and the crazier tempos from the first disc other than on a very exuberant version of “The Sheik Of Araby.” However there are such highlights as the furious horn riffing on “Chinatown, My Chinatown,” the inclusion of the verse (along with an extra closing ensemble) on “Mandy Make Up Your Mind,” the surprise group vocal on “That Little Light Of Mine,” and the use of organ on a bluesy version of “Amazing Grace.”

The Salt Lake City 7 seems like a natural for the jazz festival circuit. It is a pleasure hearing colorful Dixieland performed by this young group of fine musicians.

A compact disc of The Salt City 7 album is available from www.jazzhangrecords.com