Performing live cuts to the essence of what we do as jazz musicians. We love performing in intimate settings (because jazz is traditionally acoustic music) but your band will often get called to play large festivals. This may also involve an outdoor stage and, as a result, will involve you having to deal with a Sound Guy.

The Sound Guy is the guy who sets up all the microphones, speakers, and PA system to amplify the band for a large crowd. Your Sound Guy can easily be identified as the middle aged guy in black jeans, black T-shirt, and long thinning hair. (Please note: black jeans will be worn no matter the weather, even a 100° NY Summer’s day.)

Handling an over-enthusiastic Sound Guy is an important skill for the professional jazz musician, and there are many tips to navigate this minefield.

Here’s the Professor’s Guide to Dealing with the Sound Guy:

Firstly, upon meeting, get him on side by asking him if he’s a musician. (And you need him on your side. After all, he has the power to make you sound like crap if he wants to.) Sound Guys are almost always rock guitarists who never quite made it. So they will happily delay the soundcheck to tell you about their latest Fender Stratocaster they just bought off eBay and are restoring the pickups which were not the original and blah blah blah…

This leads me to another very important point: most Sound Guys are frustrated rock musicians. In other words, they have no idea what jazz is. Show them a clarinet, and they’ll scratch their heads wondering why the hell the soprano sax is made of wood.

As Sound Guy is setting up his mics, it’s inevitable that at some point he’ll have to bend over, revealing some A-grade Sound Guy butt-crack. (Keen observers may note a few tattoos, differentiating it from standard plumber butt-crack.)

Once the microphones are set, your band will take the stage for a soundcheck- and this is always a challenging test of one’s patience. Please bring earplugs to the soundcheck. Sound Guy’s rule for testing the microphones is to turn up the volume on the sound desk so that the feedback scream is so loud one’s ears start to bleed. That’s the cue for Sound Guy to pull back the volume just slightly. (NB: Your Sound Guy needs painfully loud volumes to hear anything at all, after losing the top half of his hearing from that Motley Crüe cover band he used to play in.) 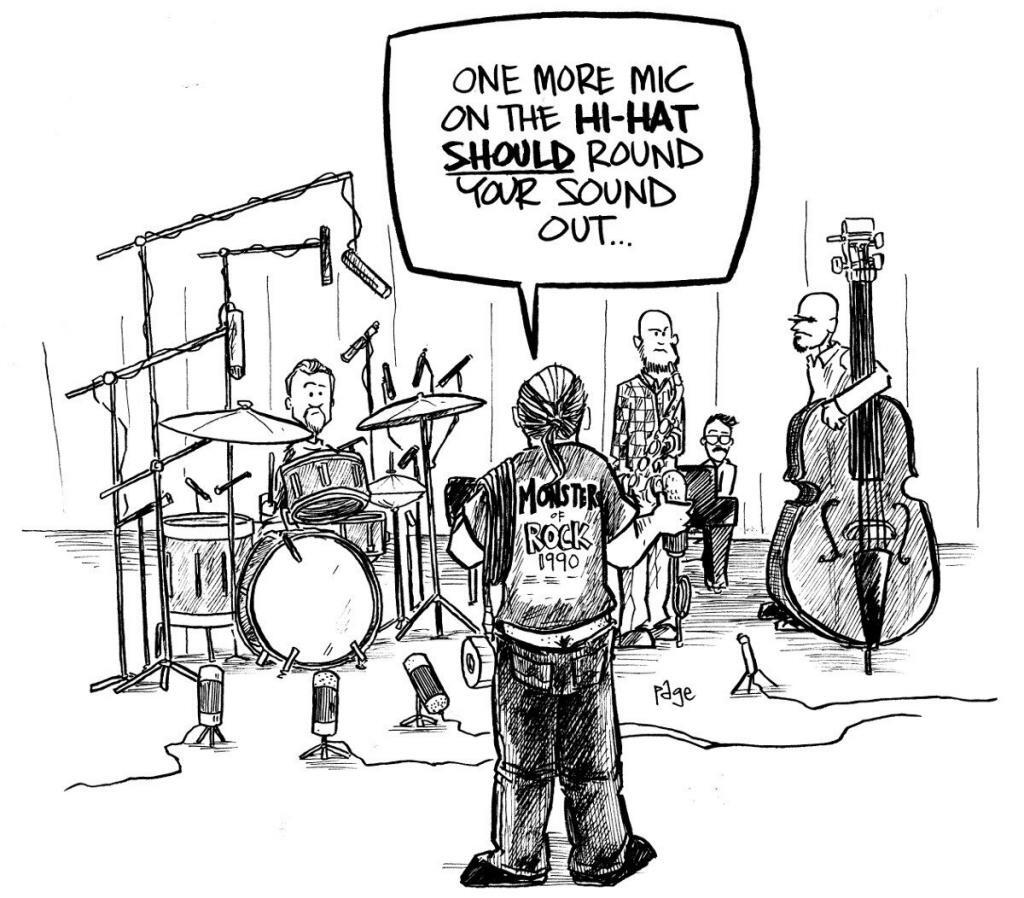 Now, the first instrument that needs to be soundchecked is the drum kit. In Sound Guy world, this is exponentially the most important instrument. It’s vital that each drum and cymbal have a minimum of two microphones on it. And the loudest drum needs to the bass drum. Here’s a test for bass drum volume: stand in front of the subwoofer speaker while the bass drum is playing. If the vibration gives you heart palpitations, you’ve hit the right volume level.

Please allow around two hours to get the drums soundchecked. This will allow the remaining eight minutes to check the rest of the band. However, six of those eight minutes will be spent with Sound Guy boasting about his new Neumann TLM microphone that he bought online, that really brings out the 10k. (That is irrelevant because Sound Guy lost his 10k hearing in the mid 80s. But he’s trying to impress you, so act interested.)

At long last, the band will have finished soundchecking. And it’s time to get ready for the performance.

But—Sound Guy’s job isn’t done! He will then proceed to fiddle with the knobs on his sound desk for the entire performance, because he feels that he’s part of the band, and knows which parts of the song should be louder. (Rule of thumb: the less idea Sound Guy has about what he’s doing, the more he’ll fiddle with his knobs.) This constant change of volume negates any time spent soundchecking the band, but is an important ritual in making Sound Guy feel useful, so best not to complain.

When the gig is done, Sound Guy will inevitably come up and say, “I don’t normally like jazz, but that was fun.” Shake his hand and thank him.. and thank the gods he didn’t have lights and a smoke machine.