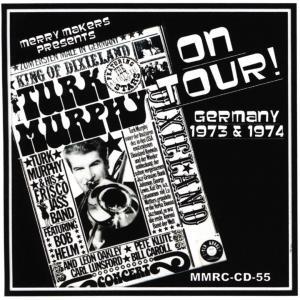 The performances on this CD were taken from recordings made at several concerts during the band’s tours of Germany in the early seventies and from radio broadcasts there. The personnel of the band at this time was one of the best that Turk Murphy ever assembled, and these tours were designed to be two of a total of four; but for unknown reasons Murphy decided here would be no tours three and four.

Such decision was not made, according to Leon Oakley, on the basis of the reception the band got—it was outstanding. To this day the abandonment remains a mystery.

Some five tracks are given to speaking and contain no music. For the radio segments, a certain PFC Craig Miller interviews some of the band members for his radio shows, giving it his best shot but betraying an almost total lack of familiarity with the music.

Murphy is asked to differentiate between “traditional jazz” and “dixieland jazz,” for instance, (in a nutshell Murphy points to trad. as being oriented toward the ensemble, dixieland toward the individual musicians); and Helm to elucidate any changes between the instruments of “yesterday” and “today” (and he replies, “Not too many that we use in this band”). So there isn’t a whole lot to be gained from these verbal tracks.

The music, however, is a different story. It is rich, full bodied, Oakley playing as if on fire and seeming to inspire the rest to do likewise, “Doctor Jazz” exemplifying this perfectly—such energy! Oakley’s lip is sure (there are advantages to being in one’s early thirties!) and he has perfect control, flubbing no notes, providing the ideal backing to vocals and soloists.

His vibrato is so fitting of anything he does. His vocals, too, are on the mark, as are those taken by Bob Helm and Murphy. On these recordings Helm shows no trace of the “sour” tone (a certain flatness) he so often had on the Yerba Buena Jazz Band recordings, especially when he plays soprano sax.

Murphy, as he did until the end of his life, plays a blustery trombone and demonstrates an amazing tonguing technique, especially on numbers such as “I Am Pecan Pete,” Murphy’s own composition, which charges at “take-no-prisoners” tempo.

The back line does not enjoy the best of acoustics and is, for the most part, barely heard except for the odd solos, such as Pete Clute’s on “London Blues” or Lunsford’s and Bill Carroll’s on “Saint Louis Blues.” And that leads to the one flaw in this recording—there are so many locations and probably most had less than top-of-the-line recording equipment, the result being a lack of balance on occasion or a kind of “muddiness” to the overall sound.

But these are minor cavils. This disc more than makes up for any shortcomings by the sheer exuberance, the fire, the joy of the playing. It is very fortunate that Leon Oakley made the tapes available and Ted Shafer had them transcribed, then issued this CD.