The View From the Children’s Table

I have been allowed to live on this planet (by virtue of not being worth the energy to throttle) for fifty-three years. It’s a lovely age. I wouldn’t call fifty-three the New Thirty but it’s considerably better than I anticipated. The most delightful aspect is that I am able to enjoy robust health while saying (with all fervent sincerity), “I’m too old for this [supposedly fun activity]!” (Said activity could be any vigorous movement whatsoever, particularly that which might require one to sign a waiver.)

What I find mildly—ah, disconcerting—is when I attend performances of Traditional Jazz. There I am usually the youngest person in the room. Sometimes it’s as if all eyes turn toward me with a single thought: That pesky kid is back trying to horn in on Our Music. Suddenly I am that thirteen year old punk again, being thrown out of the Bonanza Steak House for not having a parent with me.

As pages fall off the calendar in cinematic fashion (and the hair off my head, likewise) I can never quite dispel that feeling of sneaking into where the grownups are in with my clumsily-faked ID. As an unwilling member of the Lousiest Generation, I have always craved entertainment that was too old for me. Because I did not appreciate the dubious charm of musically-induced tinnitus I was ridiculed by my contemporaries. But I felt a certain suspicion of my motives when I appeared (suitably flanked by parents) at Big Band events. (“What’s that kid doing in here?” “He’s fine. He’ll have a Shirley Temple.”) 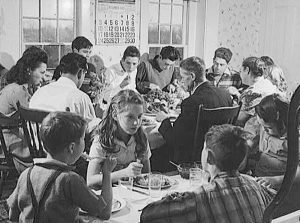 So here I am, a great big middle-aged adult still cowed by those in the Greatest Generation. Alas, I didn’t live through the Depression—though suffering through the awful 1970s with my mother telling me sad stories of wearing cardboard-soled shoes to school was like living through it twice. (For my father, the worst Depression hardship was having to eat Campbell’s Tomato Soup more than twice a week.)

Somehow, those privations—the bad shoes and the canned soup—made them right about everything. And I kept my callow opinions to myself.

I would love to stand on a plinth and shout, “I, too, have suffered! I came of age during the OPEC crisis, Watergate, polyester, and Disco! I have been irreversibly traumatized by the bad taste of others! I demand to be counted among the Greatest of the Lousiest!” Yet I am stuck at the Children’s Table with all the other fifty-year-olds.

It is not merely at jazz concerts where I find myself being handed the Kiddie Menu. Since 1990 I have delighted in theatre organ, having been taught to play by an organist who performed at the very end of the silent movie era. Recently I attended an organ concert at the New York state fairgrounds for the first time in twenty years. It was a sparser crowd than I remembered but they were all exactly the same people, just twenty years older.

Certainly, I do defer to age as polite custom demands. I merely wonder when I am the senior member of the company (in more than name only) whether there will be anyone after me to power up the organ blower. In all but a few parts of the country theatre organ is moribund, and may soon exist solely as a period accompaniment to vintage silent films. Its vogue as a concert instrument may have had its day.

Traditional jazz is in less dire condition, except that (barring any good news from Ponce de Leon) the current membership of many early jazz societies won’t be around to stomp and strut much longer. In twenty years, who is going to be left to open the doors of the hall? After all these years it’s hard to remember how to welcome new listeners and dancers into the clubhouse.

There will be occasional weird kids who find themselves drawn to that amorphous genre the initiated call OKOM—an acronym which baffled me until I realized it stood for “our kind of music.” Calling the music “ours” feels proprietary—and forbidding. Unfortunately, this music won’t be “ours” for much longer. But whose music will it then be?

In my view of hot jazz, the Children’s Table is the exalted position. When I hear young musicians who can play their instruments and know their stuff I shout with joy. I treat them as royalty, which they are. More than that, I welcome them to the party. They’re the ones who will keep it going long after I’ve strutted off the planet.