Tommy Dorsey’s Clambake Seven- The Music Goes Round & Round 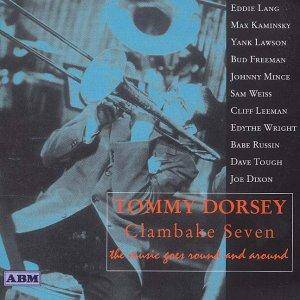 During the swing era, many of the more jazz-oriented big band leaders enjoyed playing occasional songs with small combos drawn out of their orchestra, a setting that allowed them to cut loose a bit. Benny Goodman started the trend with his trio and (by 1936) quartet, Bob Crosby’s Bobcats were the most prolific, and there were also Artie Shaw’s Gramercy Five and small units from Duke Ellington and Count Basie’s bands that did not have special names.

One of the first of these units was Tommy Dorsey’s Clambake Seven. The trombonist had split from his brother in mid-1935, leaving the Dorsey Brothers Orchestra and forming the Tommy Dorsey Orchestra out of a big band formerly led by Joe Haymes. On only his sixth session since the breakup, he debuted the Clambake Seven on December 9, 1935, having a hit with his version of “The Music Goes Round And Round.”

Dorsey’s small group tended to be Dixieland-oriented, particularly in its early days. The Clambake Seven only recorded a total of six songs during 1935-36 before becoming a regular feature, cutting 24 titles in 1937 and 14 in 1938. By 1939, which just had a single five-song session, the Clambake Seven was slipping away into history. Dorsey would revive the Clambake Seven name for two songs in 1946, three in 1947, eight in 1950 and a final two in 1952. Its entire legacy (not counting broadcasts) resulted in 64 titles.

A CD from the Acrobat label, The Music Goes Round And Round, has 23 of the 49 Clambake Seven titles from 1935-39 plus a ringer. “Tiger Rag” from 1928 has Dorsey (on trumpet) jamming with a quartet that includes guitarist Eddie Lang. Otherwise the contents of the CD stick to the Clambake Seven with the highlights including the title cut, “At The Codfish Ball” (featuring tenor-saxophonist Bud Freeman), “The Milkman’s Matinee,” “The Lady Is A Tramp,” “When The Midnight Choo-Choo Leaves For Alabam’,” “Chinatown, My Chinatown,” “The Shiek Of Araby,” and “You Must Have Been A Beautiful Baby.”

Among the key sidemen on many of the titles are Yank Lawson, Max Kaminsky, Pee Wee Erwin or Sterling Bose on trumpet, clarinetist Johnny Mince, and drummer Dave Tough in addition to Freeman. Singer Edythe Wright (virtually her entire career was with Dorsey’s band) is an asset on half of the titles. Dorsey clearly had a good time jamming with the band. Unfortunately Bunny Berigan (who was with Dorsey for part of 1937) missed being on these sessions but plenty of hot moments are provided by the trumpeters.

A word should be said about the flawed packaging of the Acrobat CD. While 25 selections are listed, two “(Twilight In Turkey” and “He’s A Gypsy From Poughkeepsie”) are missing. Actually the entire output of TD’s Clambake Seven would make for two great CDs someday; hopefully some label will get around to that idea. In the meantime, the Acrobat release serves as an excellent introduction to the spirited band.