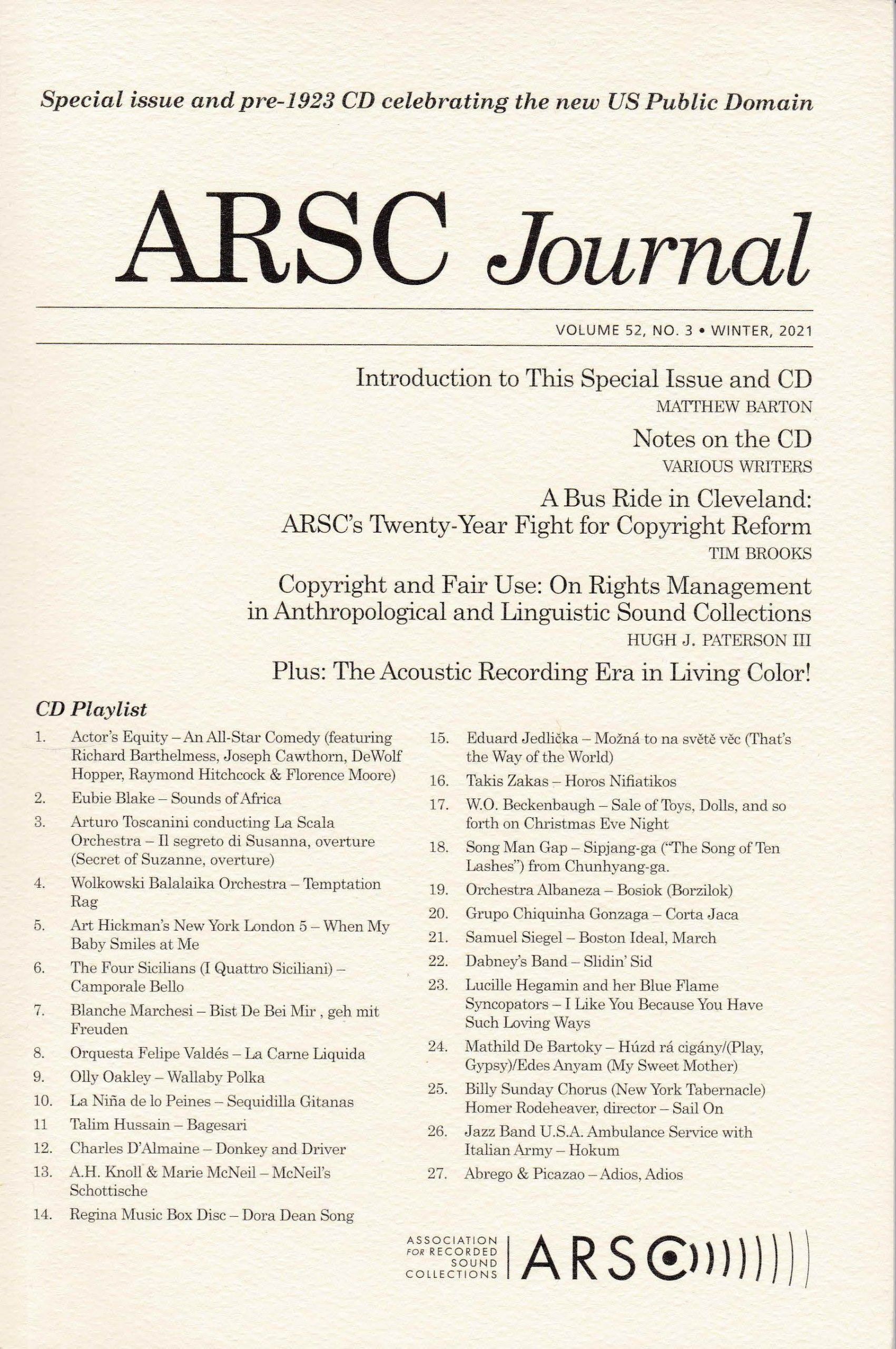 The current issue of the ARSC Journal arrived with a most welcome surprise—a 27-track CD produced by the organization of carefully restored and recorded tracks of music that are now, for the first time ever, solidly in the public domain. (The CD is reviewed by Joe Bebco in this issue.) The issue is a celebration by members of the ARSC (Association for Recorded Sound Collections) whose decades-long effort to loosen a tenacious corporate grip on the entirety of recorded sound has now come to fruition.

Unlike other media, sound recordings, even those made in 1888 were subject by a tangle of state and federal laws to near-permanent copyright control. The DMCA (Digital Millennium Copyright Act) strengthened this hold, and a 2003 Supreme Court ruling stated that Congress had free rein with regard to legislating copyright. Two years later, the New York State’s highest court ruled that record companies had perpetual control of recordings under state law.

The net result was that even institutions of higher learning where unique recordings were held were reluctant to make them public even in the interest of scholarship. There was the danger that expensive litigation would result, and even the fear of being sued was enough to keep essential fragments of our cultural heritage locked away in university vaults.

For ARSC members Tim Brooks and Sam Brylawski, this was an intolerable state of affairs. As Brooks recounts in his essay in the issue, in 2004 they began to form a plan of action. Since the music industry had long employed lobbyists, the ARSC hired its own lobbyist. The organization found further luck when it turned out a congressman was folk musician and an avid music preservationist, and managed, over the objections of the music industry, to fund a study for whether it would be advisable for all copyrights to be brought under federal jurisdiction (thus bypassing New York’s “perpetual” copyright).

By 2018, new legislation (the Music Modernization Act) was set to be enacted without the federal copyright provision and the inclusion of older recordings in the public domain. Fortunately, the ARSC was able to locate one senator receptive to its cause, and the provisions were included in the final legislation, which passed.

Why did the record companies want to hold on to rights for 120-year-old recordings? As one industry lobbyist said, “because we can.” Happily, sometimes the good guys win.

ARSC Journal, Vol. 52, No. 3 (Winter 2021), is available through www.arsc-audio.org for $15 postpaid in North America and $35 postpaid outside North America.