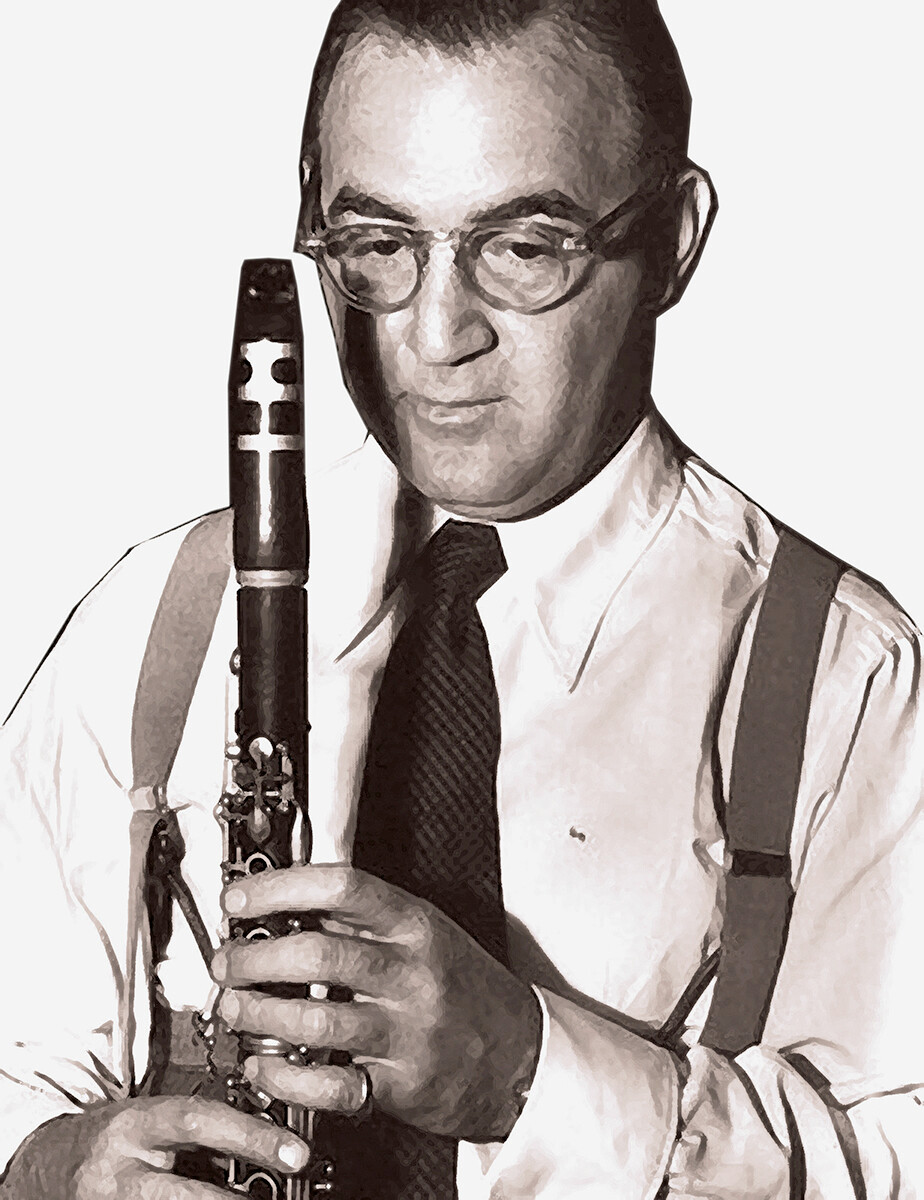 In the late 1930s the Swing combos of Benny Goodman  (1906-1986) created a game-changing small-band Jazz format. His trios, quartets and sextets brought sophisticated combo jazz to a broad popular audience, generating excitement among fans, critics and fellow musicians. Creating a new format that Benny called “just like chamber music.” That achievement alone would have marked him for greatness. But Goodman also ran the most popular dance orchestra of the Swing era, shaping and defining mid-Twentieth Century American Popular music.

In his orchestra and combos, Goodman developed a new leadership role for the clarinet that was not unlike what Louis Armstrong had accomplished for the trumpet. He waxed about fifty small-band sides in the late 1930s, some selling up to 50,000 copies. The combos emerged from his desire to explore new artistic challenges with extraordinary soloists, beginning in 1935 with the original trio of pianist Teddy Wilson and drummer Gene Krupa. Hiring vibraphonist Lionel Hampton in 1936 made the quartet. Adding electric guitarist Charlie Christian launched the sextet in August 1939.

Audio: From the Yale Library Collection

Goodman’s small bands succeeded because of his ability to generate unlimited improvised variations in creative interaction with brilliant soloists. The commercial and aesthetic success of the combo format inspired similar experimentation by other bandleaders and their record labels.

By the late 1930s Goodman’s innovative ‘chamber jazz’ was being widely imitated in small bands spinning off from the orchestras of Count Basie, Tommy Dorsey, Artie Shaw, Bob Crosby, Duke Ellington and John Kirby. From 1935 on and for the rest of his life, Benny presented some of his best work in small bands of various sizes with shifting personnel on records and in live performance. 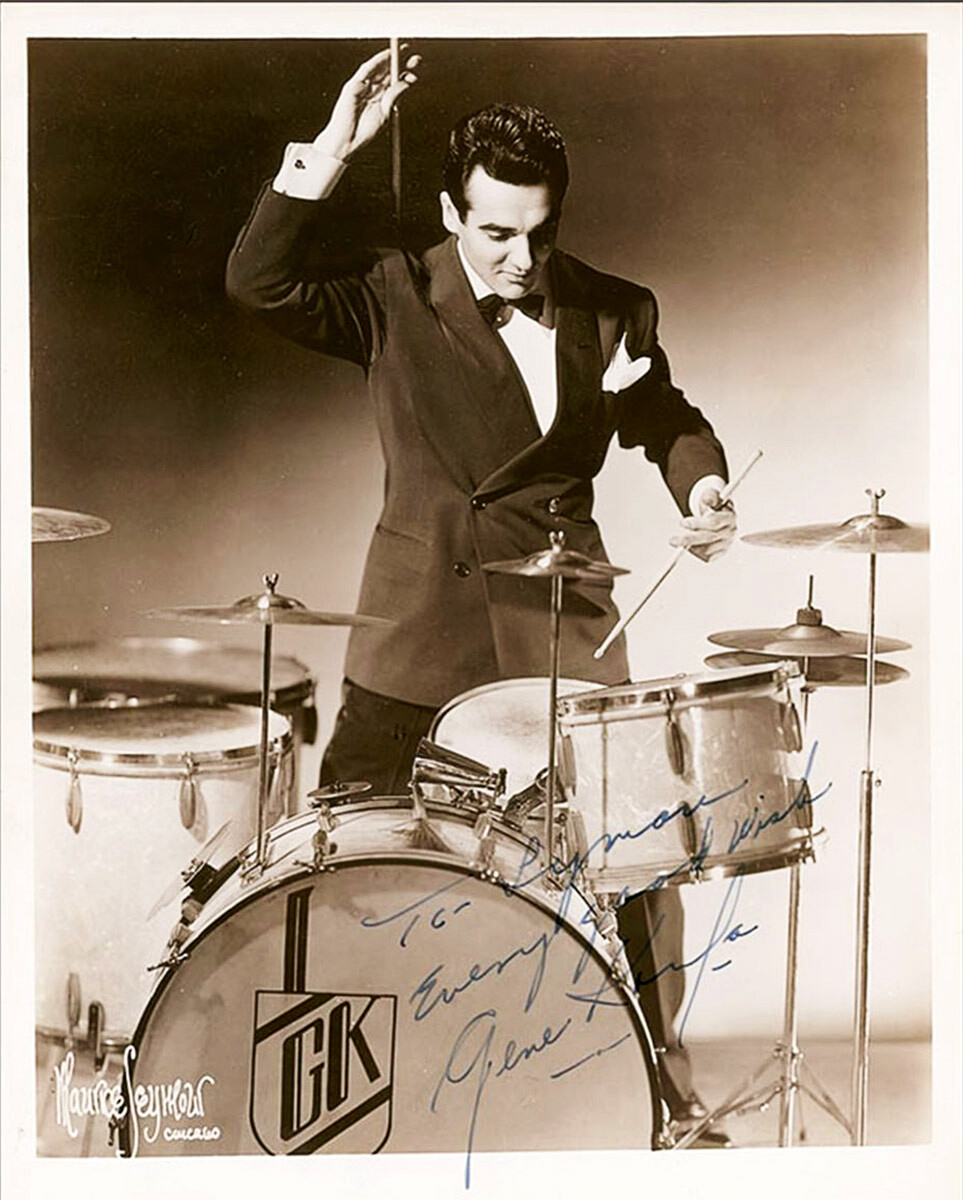 Pianist Teddy Wilson (1912-1986) was a gifted and formally trained musician. His right-hand keyboard runs followed Benny’s clarinet lines seamlessly in nearly telepathic rapport. Drummer Gene Krupa  (1909-1973) was part of the original Goodman Trio, sharing that duty with some of the best drummers in Jazz while developing a successful independent career.

Krupa was the star soloist of Goodman’s 1937 hit “Sing, Sing, Sing,” his lengthy drum solo the first of its kind on record. And though Gene soon left to start his own band he returned often as a special guest, as did all the original members of the quartet. As each musician moved on to successful independent careers they were followed by dazzling talents. 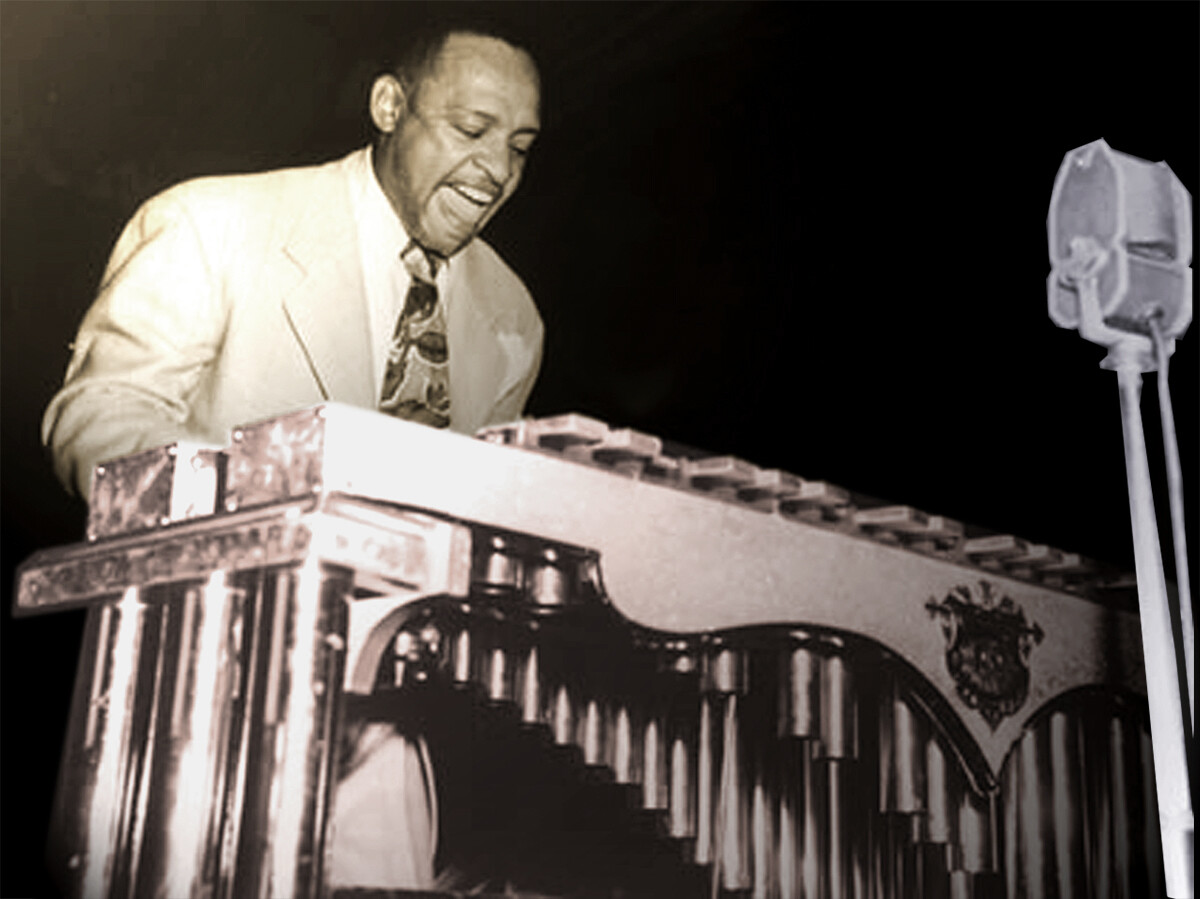 Adding Lionel Hampton (1908-2002), Goodman launched the Quartet in 1936.  His vibraphone was an innovation in Jazz, producing both percussive notes and sustained piano-like tones. Playing with elegant restraint on velvety ballads, he blended flawlessly with Teddy Wilson’s piano and Benny’s clarinet. Becoming an enduring star, Hamp was an effervescent showman whose raucous call-and-response routines riled up audiences.

Guitarist Charlie Christian and the Sextets

Legend has it that Goodman, or his managers, hired guitarist Charlie Christian  (1916-1942) after a single late-night jam session, creating the Benny Goodman Sextet. An unschooled but gifted musician, he was a dynamic soloist who upon first hearing a melody and chord structure was instantly ready to play variations indefinitely. He rejected the previous role of guitar limited to only providing chords-and-rhythm in the Jazz ensemble.

Christian utilized the pioneering electric guitar techniques of his innovative mentor Eddie Durham to hold his own with the horns. Using newly available instrument amplifiers, both these musicians produced powerful single-note melody lines like a saxophone or brass instrument. And both may well have been impacted by the amplified guitarists of Western Swing who surrounded them on the Texas/Oklahoma plains. Hot String Bands had clearly demonstrated the potency and articulation of amplified guitar in, for instance, Leon McAuliffe’s 1936 hit “Steel Guitar Rag.”

Despite a truncated career, Christian had a huge impact on Benny Goodman, Jazz, Popular music and future generations of guitarists. A brilliant improviser, he presented a bell-like tone, adventurous chording and confident angular lines that some say echoed saxophonist Lester Young. Sadly, just as his star was rising Charlie developed advanced tuberculosis that killed him at age 25. Goodman quietly paid his medical bills.

Aside from his Swing orchestra, in the combos Benny generated an outstanding body of work. Recording sessions of the so-called Benny Goodman Sextet soon grew to seven or eight instruments, providing an experimental platform for his studio encounters with brilliant peers. Lineups fluctuated as Benny cycled through a roster of the finest musicians at the cutting edge of Jazz: piano players Count Basie, Johnny Guarneri or Mel Powell; saxophonists Johnny Hodges, Georgie Auld and Lester Young; singer Peggy Lee; trumpeter Buck Clayton and drummers Dave Tough or Nick Fatool.

The startling move of trumpeter Cootie Williams from Ellington to the Goodman camp was recounted breathlessly in the music press. Defection of the plunger-mute master prompted Raymond Scott’s popular tune, “When Cootie Left the Duke.”

Aided by his plentiful talent, fame and discipline, Goodman eventually performed or recorded with the major symphonic and classical chamber ensembles of the world. He commissioned works by celebrated composers Bela Bartok, Aaron Copland, Morton Gould and Paul Hindemith.

Formal training yielded long-term benefits, enhancing Benny’s technique and interpretive range and aiding his retention of an extraordinary embouchure late into life. Fluency in the classical-symphonic repertoire must certainly have opened him to the broader spheres of purely artistic musical expression.

Goodman did not set out to challenge racial segregation in the music industry. He wasn’t politically radical. But he was a radical musician with just enough commercial clout to get away with violating the racist practices of the recording industry. He sought colleagues who were his equal in creativity and skill regardless of their ethnicity, often choosing musicians of color.

Benny hired the artists he wanted to work with and if they happened to be Black he wouldn’t let institutional racism stop him. As he put it, “I’m selling music, not prejudice.”  Rudely confronted by a bigoted fan using the n-word, Goodman responded, “If you say that again I’ll take this clarinet and bust you across the head with it.”

In practice, no racial incidents resulted from the inclusion of African American musicians on records or in his touring ensembles, even in the Southern United States. Though once in Dallas, patrons demanded their money back when the quartet did NOT appear. However, these sidemen were never officially presented as members of the band but special guests. Still, wide social acceptance of his chosen partners demonstrates the power of Jazz to transcend social and institutional racism.

Harsh assessments have been leveled at Goodman and his music from time to time. Some have suggested that he was a Caucasian musician who exploited the music of African Americans for his own benefit, popularizing a bland hybrid for mainstream white audiences. Even if this were true, the fact remains that few entertainment professionals of his stature did more to challenge longstanding racism in the music industry. And though Benny catered to popular tastes, his music always contained unmistakable jazz elements and presented outstanding improvisors regardless of their ethnicity. 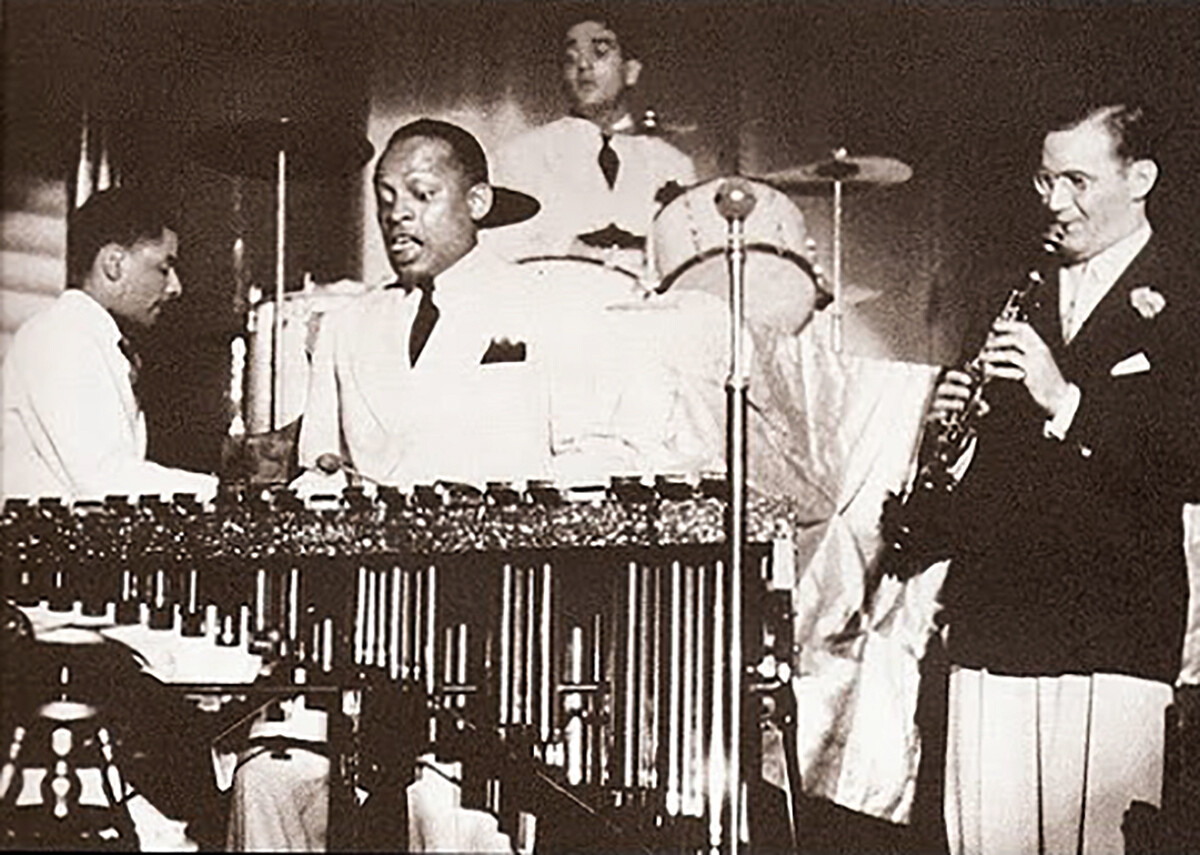 In the 1970s Goodman developed an affiliation with Yale University, conducting seminars and receiving an honorary doctorate. Just months before passing in 1986, he donated his voluminous personal collection of memorabilia, 5,000 photographs, 1,500 arrangements, scrapbooks, awards and clippings.

Benny also contributed to Yale hundreds of audio recordings, granting the publishing rights for previously unreleased recordings. Offering an illustrative cross-section of his career, The Benny Goodman Yale Library Project has issued at least a dozen remarkable audio anthologies, which are intermittently available on CD, vinyl, audiocassette or streaming services.

Only 100 copies of the vinyl record were pressed on a tongue-in-cheek marque, Co Lector Situm. Special thanks to the late Louis Lowenstein.

This article is based on the award-winning radio programs by the same name found at the Jazz Rhythm Benny Goodman page  where you can also find more about Charlie Christian.