Ask a Lindy hopper to describe blues dancing and most will evoke spacious ballrooms, the lights turned low in the wee small hours after most swing dancers have gone to bed. A dedicated few doggedly keep the party going, despite having arrived eight hours earlier. Tired from their athletic exertions, they have only the energy to hold on tight and sway.

Otherwise, they might describe a little blues bar in the city, to which the same dancers have decamped when their ballroom closed. The bar is still open, but the floor too small for them to swing out. Thus they shuffle in close, chest to chest, and wiggle slowly to the Carolina Chocolate Drops.

In short, many swing dancers know blues dancing only (or primarily) as a slow style performed only when quicker alternatives (Lindy hop, collegiate shag, balboa, etc.) seem too tiring or awkward. It’s danced to slower blues music and exclusively in the early morning.

But this is a misappropriation of a distinct art form with a much longer history. And full-time blues dancers—dedicated ones who study it in the day time—are getting sick of this; so much so that one of Scotland’s biggest swing and blues dance festivals has ditched swing to focus solely on blues dance. Its organizers say the separation of swing from blues is historically accurate, artistically justified and long overdue. 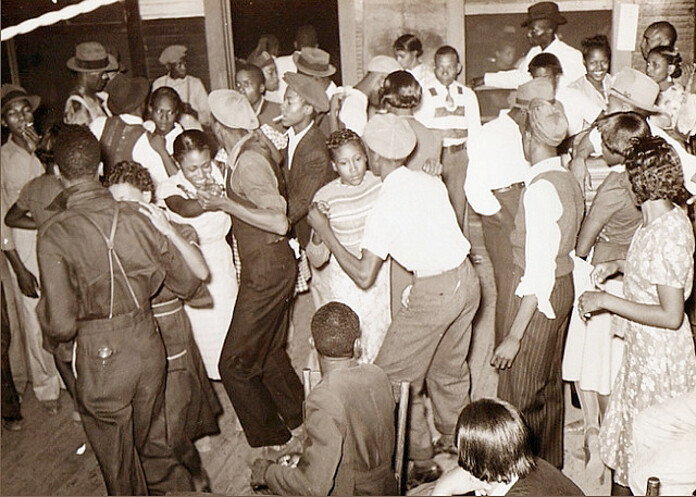 Taryn Crosbie and Jo Meyer are the driving (or dancing) force behind Moonshine Blues Dance Festival, which debuts in October 2019 at the Macdonald Marine Hotel and Spa, Scotland. For three years their event took place at another spa hotel in November, involved a bigger team and was called Moonshine Lindy and Blues Festival.

Taryn, a New York native now living in Scotland, has danced for over 20 years. She learned from some of the original Lindy hoppers—Frankie Manning, Norma Miller, and Dawn Hampton—at Dance Manhattan in the 1990s. She moved to Britain after meeting and marrying a Scottish west coast swing champ and now teaches at West Coast Swing Edinburgh, while co-owning dance shoe company Key & Crosbie.

Australian Jo has been in Scotland for 22 years. Having danced several styles as a child, she discovered and fell in love with blues dance in 2009. She has taught the style with EdinBop since 2015, sharing the love far and wide by helping to organize Edinburgh’s Black Label Blues, before joining Moonshine organizer Taryn to put in its new, blues-only incarnation—a “high-end, luxury dance holiday” rather at odds with its humble roots.

“There was no Lindy hop in the juke joints, ever,” said Taryn, a keen student of dance history. “There wasn’t enough room, for one thing. They would be a small shack, where you just held on to someone and moved in time with them.”

But the festival’s opulent setting serves an important function, for European blues dancers. “If you want to attract big-name teachers from America you have to create a fanfare and an atmosphere that lots of people will want to come to,” explained Taryn. “We don’t make enough money from it to buy a stick of gum, but the average dancer has much better dances because of the training provided. And we need to keep bringing American teachers over here as attitudes to blues dance are changing fast, and we want to keep our fingers on the pulse.”

Such shifts ultimately led to the amicable divorce at Moonshine HQ. “It was like a marriage, but the love was gone,” said Taryn. “When I first came to it, blues was basically slow Lindy. Then it started to change and develop, until the etiquette has become very different. It’s not just Lindy people coming through from the ballroom late at night.”

Blues and swing dance involve quite different posture and movements. Appearing in the mid-1920s, the Lindy hop was a radical departure from the dancing which came before. Where older styles involved a close, upright hold on one’s partner, Lindy would evolve to make spectacular, acrobatic use of frequent breakaways.

Where an occasional blues dabbler might carry these breakaways over from Lindy hop, dedicated blues dancers use them sparingly. Connecting chest-to-chest and largely staying there, they emphasize musicality of movement, without being enslaved by rules or rhythm.

“Lindy hop is a pattern dance,” said Jo, “with steps in phrases of four, six or eight beats. Blues dancing isn’t like that; it doesn’t have any repeating patterns at all. You still have a pulse and footwork, but you don’t have to do anything to a count.”

Teachers tend to split the blues into idiom and freestyle dancing. “Idiom dancing has specific movements, which can be taught,” said Jo. “Freestyling is more to do with moving however the music makes you feel. You don’t have to dance with the beat at all; you can go ahead of it or lag behind it.” 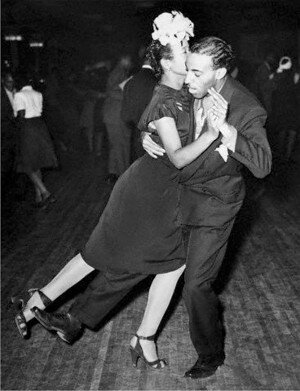 The blues scene in Europe is only about fifteen years old, contrasting with a continent-wide swing revival dating back to the 1980s. For most of that time, blues was the post-swing event shuffle. Jo said: “You can bet there have been old-timers in America watching this and saying: ‘What are they doing over there?’ They didn’t even call it blues dancing. It was just dancing.”

A steady growth in interest in the dance sparked a surge in blues research. Blues historians, of which there are a growing number, now trace its roots back to the late 1700s—making it a full century older than jazz and a half-century older than blues music. The style was born not from swing, but slavery.

“Dancing with a partner was a consolation for all the injustices black people had to endure, every day,” said Jo. “It was just a way to just hold someone and commiserate; something passed down through generations. There’s more appreciation of that history now, that blues and swing are two very different dances coming from very different places. And yet we have been linking them together for convenience.”

More and more, blues teachers are insisting that students must dance mindful of its origins in hardship and segregation. “Blues dancing is like an ice cream sundae,” said Taryn. “It’s only a sundae if you have the ice cream, the sauce, and the fruit. Likewise, it’s not really blues dancing if you don’t have the history too.”

By way of example, she added: “There was one club called Fat Sams, which let white people in but for twice the price of black people. Even then, white people couldn’t go on the dance floor. They had to go straight upstairs and watch from balconies. When the black dancers ran out of money for the nickelodeon, the white audience would throw down nickels to keep the music going.

“Now, if a Jive or Lindy hop dancer said they were a blues dancer, a dedicated blues dancer would say that’s not right. There’s a lot more importance attached by blues dancers to the culture in which this dance developed. Saying you’re a blues dancer now implies some knowledgeability about this culture, as well as the movements.”

In 2010 a group of blues teachers—mixed in gender and race—moved down to New Orleans together for several years, to get a better handle on blues history. “The interest has come from the Lindy hop community, but we’ve become much more interested in blues,” said Taryn, who was

one of them. “Lindy hop has been researched and taught a lot longer than blues has. Blues goes so much further back, there’s very little old footage of it. We can only read interviews with blues dancers who are long gone.”

She added: “The history and identity of blues is much clearer to me now. It was a very eye-opening experience; we all went down there Lindy hoppers and came back blues dancers. All of our training now is from a culturally appropriate standpoint. Cultural appropriation comes from ignorance; I don’t think that will be an ongoing problem, as there are so many organizers working so hard to educate people about the origins of blues dancing.

“We’re doing our best to learn what things we might accidentally do or say that might be keeping black dancers away. It’s the people who just want to dance to blues music and don’t care about the history who will upset people, and rightly so.”

The growing gulf between swing and blues can also be called a practical one. “There are more and more people who just aren’t interested in swing dance at all,” said Taryn. “It used to be that everyone came to blues from Lindy hop, but many people starting to learn now were not dancers at all, before.”

Jo added: “Lindy hoppers see it as what you dance when you’re too tired to Lindy. But blues dancers don’t want to wait until the end of the night for a dance; they want to dance it all day and night. Plus, the blues people dance after a Lindy event is always to very slow music. But there’s plenty of fast blues music too. More and more blues dancers want to learn how to dance blues to that music too, rather than having to dance to swing.”

Even before dance camps began specializing, dancers were (perhaps unconsciously) marking themselves out as team swing or team blues. “You can tell, just by looking, who is a blues dancer and who is a swing dancer dancing blues,” said Jo.

“Lindy people are generally more interested in vintage fashion. They will run off and get changed before a big dance. Blues people are more relaxed and just wear something comfortable, or whatever they were wearing during the day.” She added: “Lindy hop tends to paint a glamorized version of history; I’d say that blues dancers are more interested in the actual history, warts and all.”

That history stretches into the present and right into the future, the camp organizers insist. “Now, there are splits emerging within blues between traditional, micro, and fusion dancing,” said Taryn. “The music is always changing and evolving, so the dance is too. Blues styles are still being invented now. You get the trad police going around saying this is blues, that isn’t blues. What they’re really saying is I like this, I don’t like that.”

Jo sees the future of blues—born in darkness and evil acts—as a bright one, standing next to but separate from swing dance. “The blues community has grown now to the point where it can stand on its own, apart from swing,” she said. “I think blues is more welcoming than Lindy hop to non-binary people as well, as we do a lot more switch dancing than swing dancers do.”

Taryn added: “I think blues builds a stronger community than swing. I think there’s more interest in the growth of a community. Blues dancing is all about holding someone in a very close hold, so you have to like each other. It’s hard to wish ill upon someone when you dance like that.”