Cats and Dinosaurs: The Shape of Swing to Come

A Swedish swing outfit wants to share their socialist, feminist politics with you! If that doesn’t sound like a whole heap of fun, fear not—Cats and Dinosaurs have set their manifesto to brilliant music and even translated the 45-minute treatise into English. You’re welcome!

Established in 2014, this woke young collective of jovial jazz players achieved regional success touring two albums around Scandinavia. But their urge to change the world one solo at a time has prompted an English-language release, translating some of their top hits. The recording was funded by 205 Kickstarter backers, whose SEK 78,093 ($8,260) helped to produce The Shape of Swing to Come—out now as a digital download, CD, and vinyl record.

Expect to hear songs about gentrification, gender disparity, the refugee crisis, labor exploitation, and climate change, with lyrics taking a distinctly “anti-” stance in each case. That’s not to say that this disc is miserable—as Lindy hop dancers all, Cats and Dinosaurs want you to move to their liberal groove. 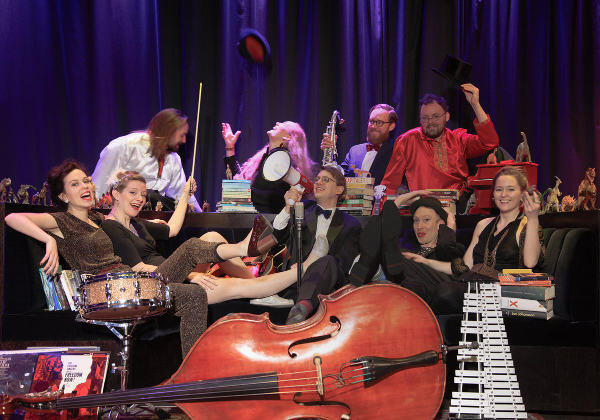 The album is a smorgasbord of familiar styles, running the gamut from Dixie to cool crooning via dirty blues and klezmer-tinged hot jazz. It employs an impressive array of instruments, with toy pianos and xylophones complementing the usual horns and strings. While this might sound twee, there’s nothing novelty about it—virtuosic solos abound, including some mighty deft piano-tickling on “Consensual Blues” and some superlative scat on “International Solidarity.” The former track is a particular pleasure, riffing on Bessie Smith’s blues dancer favourite “Need a Little Sugar in My Bowl,” updating the dirty blues narrative with loving lines like “as long as both of us are hot, we can keep on hitting that spot,” and “if you want to stop, just let me know (any time).”

The latter is a banjo-backed, border-crossing call to arms, urging jazz fans everywhere to unite and help smash “that capitalism.” The slower middle numbers do dwell on a polarized, paralyzed planet—“Too Stupid for Democracy” is a pleasant Dixie dirge, touching trad piece “How Can I?” namechecks many current international emergencies and anti-capitalist ballad “Nothing Thrills Me Like It Used To” bemoans that “everything is just a lie.”

But this disc does offer hope for the future, with closer “Socialize the Means of Production!” promising “dreams that go astray can come true today” (through socialism). Vocally, this album is a treat. Lead singer Filip Bagewitz has a gravelly growl reminiscent of Louis Armstrong, most notably in opener “Renoviction Time” (a trad toe-tapper in which an avaricious landlord growls “you can stay as long as you can pay”). He is backed by a bevy of male and female vocalists, making for a raucous party atmosphere on many songs.

This potentially divisive project is more propaganda than political discourse. Songs like “Male Privilege” will find many fans on the left, but be red rags to the more conservative bull (e.g.: “Male privilege, you can’t deny it, deep down every man knows he’s got it”). Cats and Dinosaurs’ website urges listeners to “feel the sting of left wing swing!” If you find that idea offensive, then you’d better swerve from this particular album. You might still listen to past releases Swing på barrikaderna or Kapitalismen är en dröm, which both feature tracks strictly in Swedish—this young band is talented enough to deserve a listen, politics aside.

It seems appropriate that swing should finally join the likes of folk, rock, and rap in making its politics more overt. After all, it was jazz giants like Benny Goodman and jumping venues like the Savoy Ballroom which broke down contemporary racial barriers to unite black and white. If this indeed the shape of swing to come, then I for one welcome its hep Swedish harbingers. So “put on your spending pants,” as bassist Tove Casén Nylander urges in the band’s Kickstarter video, and head to catsanddinosaurs.bandcamp.com where the band’s back catalog is available to buy now.