I’ve often pondered on the idea that I might have come from a different planet. Gradually but persistently, the evidence has been building for years. Once in awhile, there’s a brief moment in which it all becomes painfully clear. One such moment occurred vaguely during the Christmas season some years ago in the equally vaguely named Sears-Willis Tower.

I try not to play these jobs. Jobbing gigs. Ten musicians. No charts. Stand fronts anyway. Four singers. Wireless headset microphones. Two keyboards. One keyboard player. Bass player with folding stool. Hot chick on violin for some reason. Route 66. TV screen that tells you the next song. No musicianal eye contact. No names. Nowhere to escape. Good bread, though.

And there’s this trombonist. You could have ordered a Build-Your-Own Jobber kit out of the Willis Catalog and ended up with this guy. I wish I could say I’ve never seen anything like it, but there are drones like this creeping around all over the country. There used to be more, but I suspect the Swing Craze Purge of 2001 wiped most of them out.

The uniform was, of course, tuxedo. He had black sneakers, stretchy waist belted pants from Kohl’s, a yellowed white tux shirt, a plastic Timex wristwatch facing inwards, a reach-around clip-on bowtie, and a blank face. I had finally met The Archetype.

Figuring this guy was human, I told him a joke. I was wrong. He responded with a jobber word salad that is hard to put down on paper. I’ll give you some of the fragments used, and you can put them in any order you like. 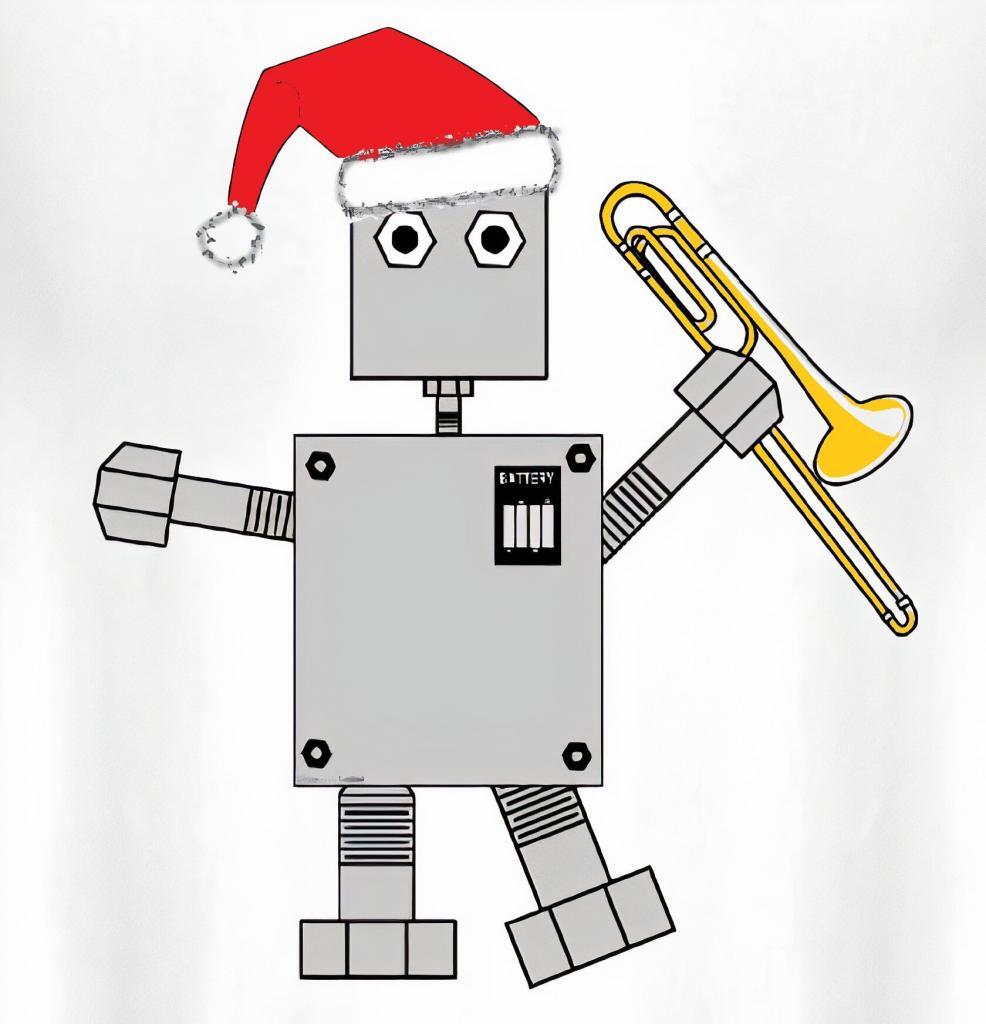 The last note of the first set was still ringing in the singers’ earpieces, and this guy was already off the bandstand making a beeline towards the sad little open bar cart with the sad little open bartender. Within 38 seconds, he had the biggest glass of un-iced Maker’s I have ever seen. (I’m more than slightly envious of both his pour, and his brazen non-human ability to request it.) He twirls around awkwardly while gulping, and backs right into a Christmas tree, tipping it into the window. Baubles are rolling all over the joint. He takes one half-hearted glance at this mess he’s made on the 82nd floor, and walks away silently, no doubt to rip a piss and check his fantasy football app.

I could regale you with many other dismal events that happened over the course of this excursion into jobbing, but they’re pretty routine. I did enjoy seeing “Have Yourself a Merry Little F#” on the Next Song TV Screen, though. That about sums it up.

I have a postscript. Six months later, I’m playing with the Cubs Dixieland Band outside Wrigley and this Man-With-No-Name shows up. He’s there to watch Da Big Game and, in his spare time, make fun of his fellow musicians. Wearing his mom jeans and wrap-around sunglasses with neck string, he expounds his detailed philosophy. “You guys are still playing this shit? Back in the ’80s, I was on [ ]’s band and making scale plus. What kinda bread you making on this shit? … Fuck that shit. Go Cubbies.” With that, this tromboner disappeared into the crowd, maybe someday returning to my life like a long-period comet; it’s exciting to observe from a safe distance, but it might cause an extinction event if you accidentally wend your way into its path.

Get me off this planet. But not before I can cash the check.

Andy Schumm is a multi-instrumentalist, recording artist on Rivermont Records, and leader of the Chicago Cellar Boys. Find the Cellar Boys online at www.chicagocellarboys.com.