Chicago’s reputation in the Jazz world is indisputable. Often considered the nursery of jazz, many of the greats came here, called it home and nursed and rehearsed the polyphonic sound of early New Orleans jazz into the hot style of the ’20s and ultimately swing in the ’30s. And similarly during the renaissance of the Dixieland years of the ’50s and ’60s, many groups in Chicago came forth proving to the world that Chicago’s jazz is hot, sweet, and alive.

As the twenty-first century dawned, so too did a new generation of jazz musicians in Chicago and they had a passion for music as it had been played in the earliest days. Helping to bridge this gap were longtime favorites such as The Salty Dogs and The West End Jazz Band. A few youngsters started hanging out, asking questions—and they brought instruments to play. One of them was was a young fellow named Andy Schumm, who brought his cornet down from Milwaukee. He was excited about the music. And he was there to learn.

“I first sat in with a Dixieland band when I was 16 years old,” says Schumm, “but I heard the stuff ’way before that. I just didn’t know what to call it.”

Not long after another Wisconsonite, Dave Bock—a trombone player, showed up. Together the two began a musical adventure that started a “New Guard” in Chicago trad jazz. The two started playing anywhere they were welcome between Madison-Milwaukee-Chicago and even Davenport.

The experience shaped them into the music masters that they are today in the current Chicago trad jazz scene. This led to the start of the “Flatland Hot Five” which rehearsed more than performed. And while visiting Davenport, Iowa, for a workshop with the Bix Youth Orchestra in 2007, the duo managed to find an empty bar on Brady Street that was amenable to them playing that very night.

The pay was not much but the gig drew most of the talent in town for the seminar (Vince Giordano, Leah Bezin, Josh Duffee) and the evening was a success musically. By 2009 both were playing or subbing with The West End Jazz Band, Andy often playing drums on an original 1920s vintage set he found while junking around. 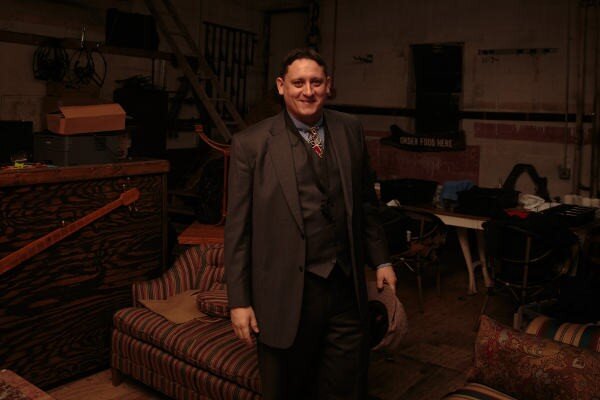 The Chicago Cellar Boys is the latest group led by Andy Schumm, the dynamic cornetist, reedman, pianist, and arranger. The quintet came about from the larger traditional eight-piece dance band, The Fat Babies. As Andy explains: “Fat Babies had been playing the Honky Tonk Barbecue for about eight years or so and two of the members decided not to work there anymore due to family and other time constraints and we decided we’re not gonna lose this gig.” Thus in the fall of 2017, the new band debuted. The Fat Babies still perform as a unit when all are available.

So with John Otto on clarinet, Paul Asaro on piano, John Donatowicz on banjo and guitar, and Dave Bock switching from trombone to tuba, the group continued to entertain the Sunday night audience at the Honky Tonk Barbecue. The dancing crowd kept dancing, the beer kept flowing, and Chicago had a new group to call its own.

Andy Schumm had already proven himself as a top notch writer of hot jazz arrangements. He had transcribed big band charts from the original 78s and had a clear idea of what he wanted to do.

“About a third of the time I go right from the 78s, almost never take the solos, and I try to arrange it for our group. The rest of the time I try to think of what we sound good playing and write for the guys in the band.”

Listening to the original recordings closely has much to do with the success of the Cellar Boys. At many jazz festivals there are record spinning parties that last way into the wee hours. Andy and Dave Bock are usually front and center at all of them.

“I got into collecting 78s about the same time I started playing with Dixieland bands. And my collection is mostly things I have found in junk stores and on the road. Not so much eBay or auctions. Each record has a story. That’s kind of how I got into it. I guess I have about 800 good ones now. “

The collection has led to much of the output on the new Chicago Cellar Boys CD, the band’s first, which was recently released by Rivermont Records. Through this twenty-one cut exemplar, one can certainly see how much the group cares about being authentic to the style while still being individual. And Andy as leader is proud to point out the CD’s highlights.

The lead-off cut features a transcription of a performance of the well known Henry Busse composition “Hot Lips” by Bill Brown and His Brownies—a record itself somewhat of a novelty when it was new, as the original song was a few years old when they recorded it. The Cellar Boys charge in holding nothing back. Says Andy: “…I love how the intro sounds like it’s stitched on from some other arrangement.”

Another cut on the CD is a novel and different approach to the well-known Ted Snyder classic “The Sheik Of Araby.”

“For that one,” he continued, “I thought of Red Nichols—The Red Heads, that sort of sound and I started writing. Whatever came into my head I just put pencil to paper and started writing.” The cut is wonderful.

Although his native instrument is the trumpet (with minor distinctions the cornet is just that) he branched out in his instrumental prowess and has mastered many other instruments including the clarinet, alto sax, tenor sax, bass sax, piano, and drums. When asked about how he mastered them all: “I always played trumpet. I started in the fifth grade. I didn’t take it too seriously until high school. I figured it was my best shot for getting into school. I wasn’t cutting it on the piano at that time. But the other instruments, I would listen with records with the guys, and, well I like Johnny Dodds but I can’t play the clarinet. So I guess I’d better play the clarinet. With the Cellar Boys I play cornet, clarinet, and tenor sax.”

A few years ago an invitation came from Australia and soon Andy and Josh Duffee were winging their way across the Pacific to join a group that featured some like minded fellows of similar age: Clarinetist Jason Downes, Saxophonist Michael McQuaid, Double Bass man Leigh Barker, and John Scurry on banjo. This group became known as The Hot Jazz Alliance and delighted many for the month of May of 2015 throughout New South Wales. The following August the group made their American premiere at the Bix Beiderbecke Memorial Jazz Festival that year. That following October founb d most of the Hot Jazz Alliance performing at the Whitley Bay Classic Jazz Party in Newcastle-upon-Tyne, UK.

“I went to Australia twice, I’ve been to England” says Andy, “I enjoy playing overseas. It’s different everywhere you go.”

An anecdote from his college days at the University of Illinois does shed some light on those differences:

“[It was] my first classical trumpet lesson. I played for the Professor for a bit. He asks: ‘Are you from the Midwest?’ I said yes and then he said: ‘Up north? Wisconsin?’ I said yeah and he goes ‘Well you have a German tongue.’ I asked what he was talking about and he said ‘You tongue very hard. It’s a specific kind of thing.’ and it made me realize even the way people speak can influence the way they play. I think it’s one of the reasons why people sound different on old time records than even now.”

Listening to records is important to getting the style and feel of a particular tune right. The older polyphonic songs in particular. One recent chart the band recorded was of a tune from the transitional period of music immediately after World War I—a period many refer to as “Rag-A-Jazz.” Careful listening brought it to life. Andy relates: “You can only play that way if all the guys are on board. If one guy doesn’t do it right it all falls apart. To be honest, one of the inspirations for [“Take Me To The Land Of Jazz”] was the St. Louis Ragtimers. They do it so well so that’s a little homage to them.”

When asked what his favorite bands are, it’s not surprising that many of them are from Chicago.

“I’ve always liked Jimmie Noone. Every time I put a Jimmie Noone chart in the book it just seems to work. It would be a shame not to take advantage of having two reed players in the band. It just works and there’s something in the air about it being Chicago. We have a lot of fun doing it.”

“We love [The Wolverines] and I got a bunch of charts worked up but we’re waiting for a third horn player to join the band—a mystery man. Stay tuned! Hopefully by 2020. I’d love to try some of the Wolverines charts without Bix.”

“The other band that seems to fit our sound really well is Clarence Williams—any of his groups. Especially since we have no drums. We did “Gulf Coast Blues” on the CD. That’s not his arrangement but it’s his tune so we figured out a way to make it sound like that. “

“We love the Wisconsin Roof Orchestra. Dave Bock is the expert on that stuff [territory bands]. It’s home grown music and it sounds like it sometimes.”

With such a repertoire behind them, the Chicago Cellar Boys are well on their way to their next CD.

John Landry has been collecting records and following the trad jazz scene for four decades now. Every week he hosts "beHAVior Night--That Famous Funny Old Record Show" as his alter-ego "SirJack Scratchy." He also lends his musical talents on violin and vocals to one of New York City's beloved 20s and 30s musical groups, The Buck And A Quarter Quartet.