Confessions of a Mad Reader

I was reminded of my favorite childhood reading material this past month when I heard that Frank Jacobs, the extraordinary writer of light verse and song parodies (and everything else) for Mad Magazine had died. It was odd, since I had just begun to dip into a huge anthology of his work a few weeks earlier, and I was astonished at the massive scope of what he had produced. He continued to write for Mad decades after I had drifted to other sources of subversive amusement.

I thumbed through his paperback volume Mad: For Better or Verse until it became ragged; I parted with it reluctantly as I let go of childish things (that weren’t actually so childish). Thinking back on it, I realized that Mad, and Frank Jacobs specifically, had influenced my own taste for satire and parody. His song and poem take-offs were accent-perfect, and they rhymed flawlessly. His sense of scansion was impeccable. I considered his work the gold standard of light verse.

His literary craft ranks with that of W.S. Gilbert, Cole Porter, Ira Gershwin, Lorenz Hart, and—yes—Irving Berlin, who sued Mad over Jacobs’ parody of “Blue Skies.” Frank Jacobs and Mad Magazine took the case all the way to the Supreme Court and won. Irving could not have been beaten by a better man. And the good news is that we thus have the inalienable right of levity—we are not compelled by law to take everything so damn seriously. I take that particular right very seriously. 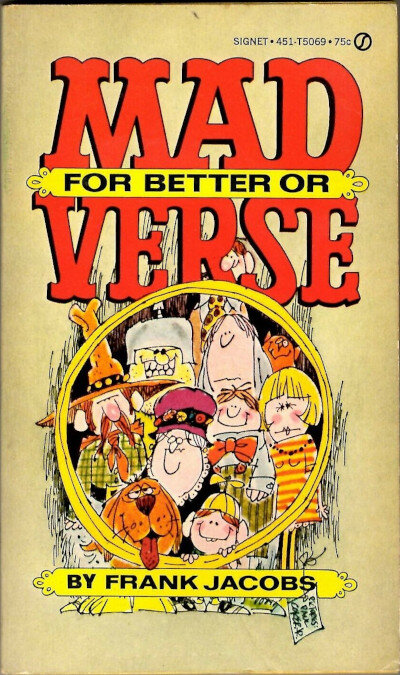 It becomes apparent to me, reflecting my years of scrawling song parodies on the backs of my brown paper lunch bags in school, that the ethic of craftsmanship in light verse and songwriting (as was embodied by Frank Jacobs) is another thing I don’t regard lightly. I would spend hours slaving over rhymes and syllables in my silly songs. Never mind that my efforts were disparaged—I knew what I had put into them. I resented lazy, sloppy songwriters who instead received the laurels—and the Debbies.

I understand now that wit and perseverance are no match for nice hair. And yet I persist—and laugh out loud. Being an incurable romantic is a hard thing, but the cure is worse than the disease. Others may not want to sit next to you at parties. But I will sit next to you, if you please, since we’ve both been immunized.

I want to speak here for those who cannot but see the absurd side of even the most solemn turn of events. I want to applaud those who are brave enough to say what they’re thinking—what we’re all thinking. I want to pin a Medal of Honor on those who do so with wit and aplomb. I can’t be one of them at the moment, since I have papers to peddle.

The spirit of jazz, like the spirit of humor, is all about taking chances and saying things that haven’t been said before—but once they are stated they wake up the mind and make it smile. The moment that I grasped how wonderful a thing it was that things could be twisted and made humorous—or that they were already ridiculous as seen from a certain point of view—was my epiphany. That realization came to me when I was very young, through Mad Magazine. Unless somebody’s getting hurt none of it is worth fighting people over.

So, what offends me? Hackery. Forwarding ancient jokes to everyone in one’s email address book. Meanness for its own sake. Partisan sniping disguised as satire, thereby debasing its coinage. Taking oneself seriously while not taking one’s craft seriously. You get the gist.

Other than that, I yearn to cackle and weep—and maybe both at once—and to hoot, bellow, and roar. It may seem impolite, but I miss my bellylaughs. I don’t want to grow old(er) scowling at bad commas and misplaced apostrophes. I want to take my fresh ukulele out into traffic and become a target for produce and imprecations. I want to be a cynosure for sore eyes—a loaded Lodestar.

The ribald voice from the back of the room speaks sweet and clear while the teacher coughs and grumbles. I know which role has always been most congenial for me. I am happier as a miscreant than as a cop. I wouldn’t be such a heavy if I got out of the house occasionally.

Dare I confess that I am a dilettante? I would tell Sisyphus to shrug. I’d recommend a month in the country to everyone right now—spent with a good rhyming dictionary. Even a day spent scat-singing would be an improvement. The sunshine is discernible just above the rim of my rut. If this is trench warfare, it’s against myself. I want to sign an Armistice—and a Legistice if necessary. I need a lasting peace while I’m still all in one piece.

It has been a taste of joy just revisiting the playground in my brain. I have Mad Magazine and Frank Jacobs to thank for that infrastructure—as well as James Thurber, Robert Benchley, Monty Python, Gilbert & Sullivan, and the Teds (Geisel and Kaczynski). The Mood Swings are a little creaky, but the Emotional Roller Coaster seems to be working fine.

I could quite happily spend more time there. If somebody thinks that it might be fun to run a newspaper, I won’t enlighten you. No unreasonable offer will be refused.