We at The Syncopated Times are excited about the potential the new Buddy Bolden movie has to excite people about early jazz, and have made a decision to be there for people who see the movie and want to learn more. As part of our extensive coverage of Buddy Bolden, the man, the legend, and his music, I interviewed the director of the film, Daniel Pritzker.

The making of the film is a saga that might well be the plot of a movie itself. One with a happy ending. Pritzker got the idea for a film not long after learning of Buddy Bolden and began writing the script in the late 1990s. Filming itself began in 2007, and after casting changes more film was shot throughout this decade. Much happened along the way. That the movie was completed at all is a credit to Pritzker’s devotion to the project. Here we are in 2019, with the film premiering on May 3rd. Hallelujah!

TST: Much of Bolden’s life remains a mystery and many of the few things we thought we knew about him have proven to be rumor. Given how little is known conjecture is inevitable. How did you go about researching Bolden and how did you balance that with the need to make a compelling film?

DP: The first time I heard Bolden’s name I felt that the story was bigger than the man. Bolden’s story is American mythology and I wanted to paint a picture of the fabric of the time in which Bolden made his music. I had no interest in making a “biopic” on Bolden. The dearth of history was critical to my interest in making this film. I read everything I could find on Bolden and the era in which he lived. The essential book is Don Marquis’ In Search of Buddy Bolden.

I also went down the rabbit hole of 18th and 19th century American history. It was clear that Bolden’s birth year, 1877, the year President Rutherford Hayes pulled federal troops from the south, ending reconstruction and beginning the era of Jim Crow, was auspicious. (The election of 1876 was an uncanny parallel to Bush/Gore – which happened as I was writing the script.) Black Americans had made in-roads into politics in the 19th century (Frederick Douglas) and education (Booker T Washington and WEB Du Bois), but Bolden was one of the earliest Black Americans whose individual talent propelled him to (local) notoriety. By the time Bolden was incarcerated in the asylum (1907), Jim Crow was in full swing.

I have loved and listened to music all my life. All kinds of music.  My parents took me to see/hear Armstrong at Ravinia (outside Chicago) when I was about 5 years old.  I have long recognized the link between Louis Armstrong and the rock and roll of my era. When I first heard Bolden’s name I was shocked that I had not heard of the guy that had such a deep impact on me and millions of others. It seemed to me quintessentially American to relegate to anonymity the Black American man that changed the fabric and tempo of the country. It struck me as tragic and poetic. This was American history and tragedy of mythical proportion. From the outset I saw this as an opportunity to make an allegorical story about the soul of America. 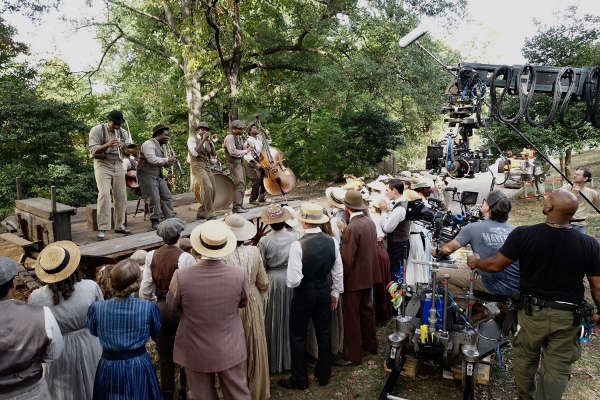 TST: What were you trying to accomplish with the soundtrack, and how did your conversations with Wynton Marsalis about the soundtrack play out?

Daniel Pritzker: Wynton and I started working on the music a year and half before I started shooting. We discussed the balance between historical accuracy and appealing to modern sensibilities. Bolden played his last notes more than 100 years ago. Since then we’ve heard Armstrong, Miles Davis, and Dizzy Gillespie among others. Our ears are tuned differently now. Wynton devised a way to portray early New Orleans jazz that covered the narrative but has an edge that keeps modern ears engaged.

TST: I listened to some of your music from the early 90s. Cool stuff but not exactly early jazz. How did you become interested in jazz- were you familiar with jazz history before you started on your Bolden journey?

DP: I loved New Orleans music since I was kid.  My dad loved the popular music of his era, Pops, Benny Goodman, Sarah Vaughan, Dinah Washington et al. We both loved Armstrong and Billie Holliday. But I was a product of my generation. I started to listen to John Coltrane because of Jerry Garcia.

TST: You have also described having an image of Bolden in the state asylum listening to Louis Armstrong on the radio, something that has made it’s way to the final film. What does that flashback narrative mean to you?

DP: The first book I read was Don Marquis’ book, ‘In Search of Buddy Bolden’ and then I read an Armstrong biography where I saw that Armstrong played at The Suburban Gardens in New Orleans in June 1931 – and was broadcast on the radio. I realized this was about 5 months before Bolden’s death (d. Nov. 4, 1931). Imagine schizophrenic Bolden hearing Armstrong on the radio. That’s what I did.

TST: You directed a silent film about Louis Armstrong, with Wynton Marsalis and a jazz band performing the music live on a theater tour. The imagery of a young Louis puts that film in the same years as Bolden’s activity. Was that a spinoff of the Bolden movie? If not, where did the idea come from and what were you trying to say.

DP: Bolden’s last public appearance was said to be Labor Day 1906. He actually entered the asylum in spring 1907. Armstrong was born in 1901 (thank you Tad Jones). The silent film shows a young Louis Armstrong running after the cart that is taking Bolden to the asylum in 1907 – the year Louis turned 6 years old. The silent film was a whimsical, Chaplin-esque piece to follow the darkness of Bolden. Dessert after a heavy meal…but I finished dessert first.

TST: The movie capture the landscape and spirit of turn of the century New Orleans. The parachute scene references a real guy, and the houses, despite the dusty streets, were newer then. Tell me about the detailing that went into creating the look of the film. How much was put into creating historical accuracy in that respect? 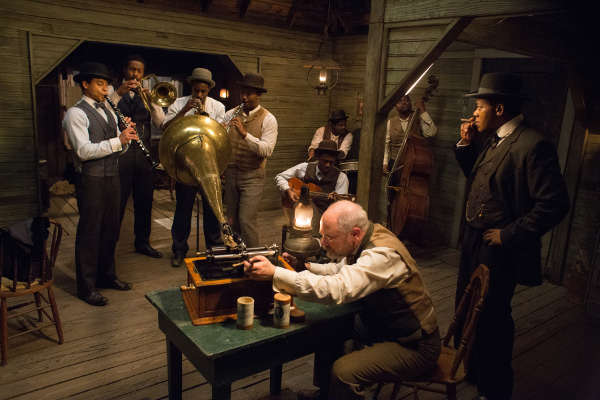 DP: Great effort towards historical accuracy of the sets, costumes, etc. But I was making something along the lines of allegory which I felt allowed me certain latitude… We shot a number of exterior scenes in NOLA as well as two club scenes, one of which was shot at Preservation Hall. Most of the interiors were shot in North Carolina and Atlanta.

TST: Our readers will hope people become interested in early jazz when they see the film but what do you want a wider theater going public to learn from Bolden’s story, is there a greater message?

DP: This is story about America as much as anything else. The fabric of the times has changed but the parallels between the early 1900s and today are heartbreaking.